All vax rates aren't the same in Wisconsin. Check the ages to get a better picture

When looking at the rate of COVID vaccinations in various parts of Wisconsin, we tend to look at the overall numbers statewide and by counties. And those figures certainly tell a story on their own, as some places are well above or well below our 40.7% statewide rate of Wisconsinites compelting their cycle of vaccinations. 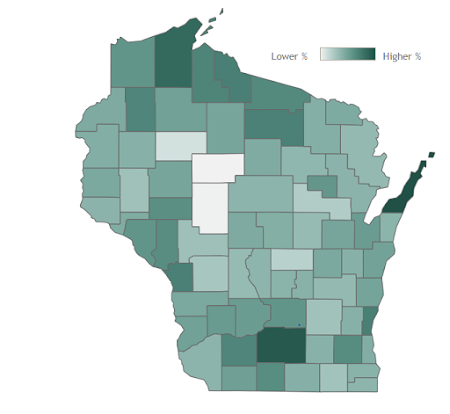 But there is also a notable difference even among counties that may have the same overall percentage of people getting doses of vaccine. For example, you'll notice the three darkest counties in that map are Dane, Door and Bayfield Counties (all of whom voted for Biden last November, by the way). And on the topline, all 3 counties have similar percentages of their populations that are done with their COVID vaccinations. 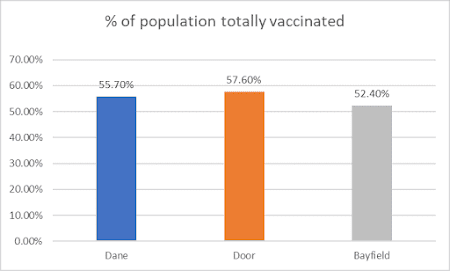 But the Wisconsin Department of Health Services also breaks down the vaccination numbers by age, and you'll see that Dane County has a noticeably higher rate of residents completing their vaccination cycles than the other 2. 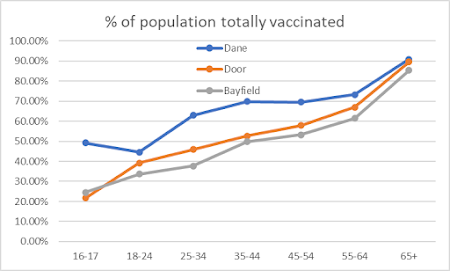 So why aren't the numbers that different overall? Because of the aging curve of these counties. Bayfield and Door Counties have a significantly higher percentage of people over 55 and especialy 65 than Dane County does, and so those high vaccination rates carry more pull into the overall number than they do in Dane County. It makes Dane County's already-large numbers seem even more impressive. You'll also notice that slight decline in vaccination rates among people 18-24 in Dane County, and I see similar 18-24 dropoffs in other counties with large UW campuses. I wonder how much of that is related to UW students that either 1. Got COVID in the Fall and don't feel they have to be vaxxed yet (sorry kids, the data indicates you still should), or 2. Spent the semester and/or being vaccinated at home vs at UW. You also can see how this aging curve can mask deficiencies or hide successes in vaccinations among other parts of the states. Let's drop to a group of 8 counties that all have had just over 1/2 of their residents get at least 1 COVID shot so far. 4 are in the Northwoods, and 4 are in the southern part of the state. Overall, these countiexs have numbers that are very similar. 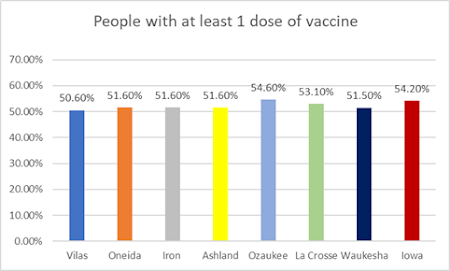 But go to the aging curve (with 12-15 year-olds included, now that they are able to get their first shots), and you'll see how the Northwoods counties have a significant gap in vaccinations for people aged 18-55 - with the exception being blue-voting Ashland County, who jumps up to the rates of the southern Wisconsin counties. 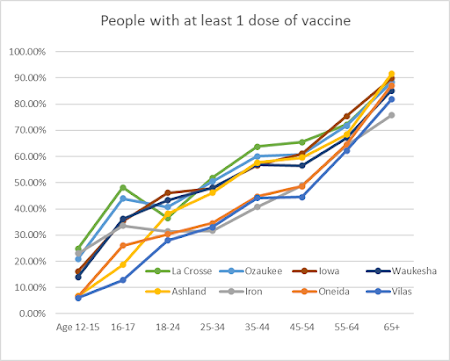 The Northwoods counties have such a high percentage of older people that it lifts up their averages vs the southern Wisconsin counties. I slso note that Waukesha County starts falling behind the top 4 counties once you get to about age 35 and especially age 45, and I bet that corresponds quite well to the proportion of people that listen to Hate Radio 1130 and other Faux News. I also can't help but notice that Ozaukee County acts a lot like La Crosse, Ashland and Iowa Counties on this chart. And guess which of the traditionally red WOW Counties has had the strongest shifts toward Democrats in the last few years? Correct, again!

A familiar map of red and blue counties. Only Sauk and Door flipped, R->D

These vaccination rates, especially when adjusted for the aging curve, is a pretty good Rohrschacht test on attitudes about other things these days (well, at least among white people. Lagging rates among Wisconsin's African-Americans and Hispanics are another issue to be dealt with). And some folks might want to take note of the low age-adjusted vaccination rates among many of the Northwoods Counties as well as the Lake Geneva area when it comes to deciding where to travel during Memorial Day weekend. But over here in Madtown, we'll likely be at or near herd immunity, so feel free to come on down, enjoy your time in our great outdoor spaces and be safe! Seems like a nice marketing niche, doesn't it?
Posted by Jake formerly of the LP at 11:21:00 AM