JOLTS and jobs - they often work together

In the wake of the surprisingly low job growth for April, we continue to hear complaints from employers and Republicans that people aren't applying to open jobs. And that theory got some backing from today's Job Openings and Labor Turnover (JOLTS) report.

In March, U.S. job openings climbed for a third straight month to a record-high 8.12 million, up from 7.53 million in February, while about 6 million people were hired. See the related @BLS_gov data in FRED #JOLTS https://t.co/vxGzibQDSF pic.twitter.com/904nkhbOZQ

Obviously, there weren't 6 million jobs gained in March - just 770,000, because 5.3 million people left jobs (via quitting, changing jobs, layoffs, etc.) But what I wanted to look at was whether there were signs as to whether these openings corresponded to the job growth in certain sectors. In particular, I found the decline in manufacturing and the 0 gain in construction jobs in April to be odd, given that we'd seen indicators that those sectors had good growth going into that month. And the JOLTS report is enlightening with these questions, at least in construction, where the trend in openings and job growth largely matched up between December and March. 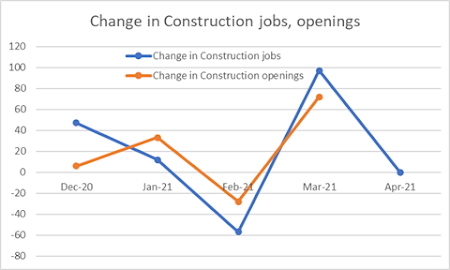 So if that tend holds, we should see openings in construction also be near zero for April. But then manufacturing seemed to indicate a one-month lag in how openings vs jobs changes worked, until we got to March. Manufacturing had one of the highest boosts in openings in the March JOLTS report (an additional 134,000), but somehow had fewer jobs in the next month. 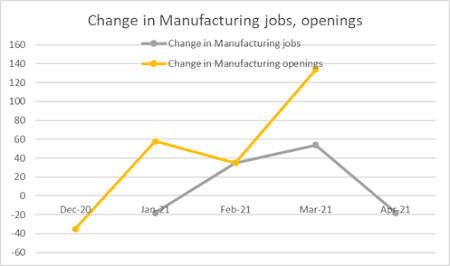 Of course, the typical manufacturing job is going to pay a lot more than unemployment, even with a $300/week add-on. So that part of the "people don't want to work" theory doesn't seem to hold. Let's check back in May to see if manufacturing employment bounces back. The one-month lag seems to be the recent rule for sectors that saw notable changes in the April jobs report. Which makes sense, since people would see openings in one month, apply, and get hired in the next. This was especially true in certain entertainment industries, which has seen jumps in both openings and jobs in recent months, as vaccinations have increased and more options have opened up. 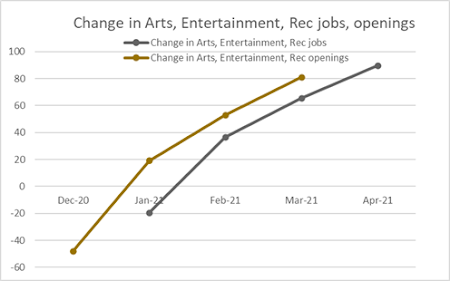 Accomodation and food services has especially benefitted from the improved COVID situation, as that area of the economy has added more than 750,000 jobs in the last 3 months. Those increases were started in February, as more places opened up instead of cutting staff (which is why the JOLTS numbers are a bit off - laid off people were being recalled vs new openings). But you can see that increased openings in those sectors in Feburary and March translated into big job gains in March and April. 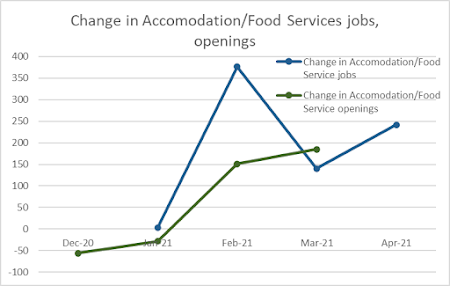 It also works for a sector that had a big drop in jobs in April - Transportation and Warehousing, as the needs to get things online and sent to your house may not have been as strong. March had a drop in openings, and it was followed by a bigger decline in jobs in April. 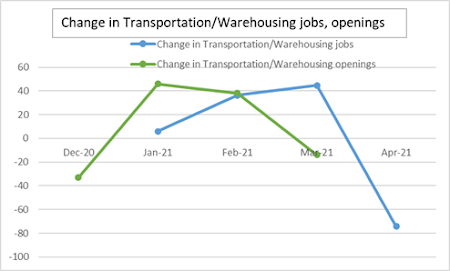 It does feel like things have changed some since both the April jobs report and the March JOLTS report was compiled. But from the numbers we have so far, it seems like the lower-wage service jobs that had openings in March were adding jobs in April, which would go against the "lazy workers staying home" theory. I also want to see what happened to available openings in manufacturing and construction, because the bad jobs numbers in April in those sectors went against an increase in openings in the previous month. So we'll see if jobs rebound for May as layoffs continue to decline (I bet they do), or if the April JOLTS figures disappoint, which would match a drop in demand, but wouldn't match the memes that GOPs and business owners are trying to float out. The fundamentals and demand for labor still seems strong, but stay tuned.
Posted by Jake formerly of the LP at 7:22:00 PM