In a brutal 2020, Wisconsin loses less jobs than most states. But it's still a big hole

While Republicans make efforts to cover up what happened in the first week of 2021, we also got more information about how much damage was done to the US job market in 2020. That was in the form of the year-end totals for the "gold standard" Quarterly Census of Employment and Wages (QCEW), which released its numbers at the nationwide and state levels, as well as for counties in metro areas. As you'd imagine, we lost a lot of jobs in 2020, and were in a major hole as the year ended. QCEW, all jobs US
Dec 2019 150,005,303
Dec 2020 140,881,253
TOTAL LOSS 2020 - 9,124,050 (-6.1%) 48 out of 50 states lost jobs last year (only Utah and Idaho were spared, and barely), with Wisconsin being one of them. But the nearly 140,000 jobs that we lost still put us below the US's rate of loss, allowing Wisconsin had its best national ranking in jobs in 10 years (well, fewer losses anyway). 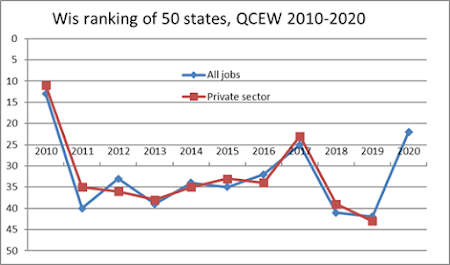 Like the rest of the nation, Wisconsin had its heaviest losses in April 2020, as it was locked down to try to contain the initial wave of COVID breakouts. Then as more businesses reopened, jobs came back in the rest of Spring and Summer. But it hit a wall after September, as weather cooled and COVID spiked to its worst levels through the rest of the year. And the same happened in Wisconsin, where our year-over-year losses were 4.8% in October, and November, and December. 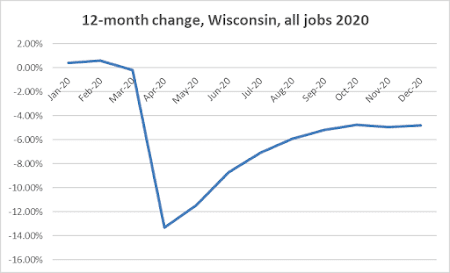 You can see just how much of a jobs hole Wisconsin and most of the country was in at the end of 2020. And while the COVID situation is much better today than it was at the end of this QCEW report, it'll still take many months of strong job growth to even come near the levels that we were at as 2019 ended. Which is why we cannot let up on economic stimulus measures, and recognize that there are many more people in need today compared to where we were pre-COVID.
Posted by Jake formerly of the LP at 7:30:00 PM