Jobs market improving, and some can't find workers. But let's not pretend we're back to full strength

Tomorrow's US jobs report is anticipated to be huge. We've already seen the ADP report from Wedensday which estimated 742,000 private sector jobs being added, and new unemployment claims have been plummeting in recent weeks.

The number of Americans filing new claims for unemployment benefits fell below 500,000 last week for the first since the COVID-19 pandemic started more than a year ago, signaling the labor market recovery had entered a new phase amid a booming economy. That was reinforced by other data on Thursday showing U.S.-based employers in April announced the fewest job cuts in nearly 21 years. The reports added to other upbeat employment data in suggesting that the economy enjoyed another blockbuster month of job growth in April.... Initial claims for state unemployment benefits tumbled 92,000 to a seasonally adjusted 498,000 for the week ended May 1, the Labor Department said. That was the lowest since mid-March 2020, when mandatory shutdowns of nonessential businesses were enforced to slow the first wave of COVID-19 infections.

You can see how the declines in new claims have sped up in recent weeks, including the gig-related PUA program. 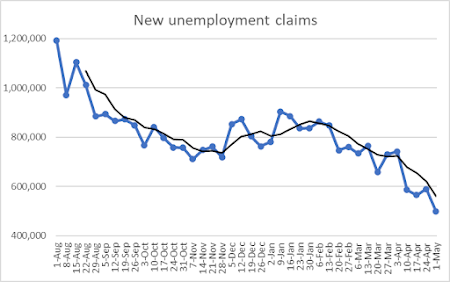 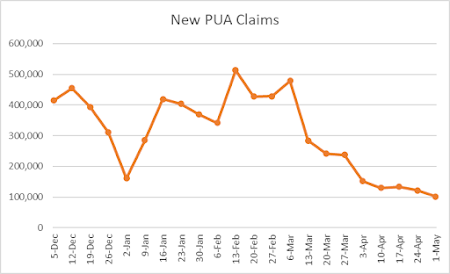 We're also seeing long-term unemployment start to decline, although it is still at very high levels. 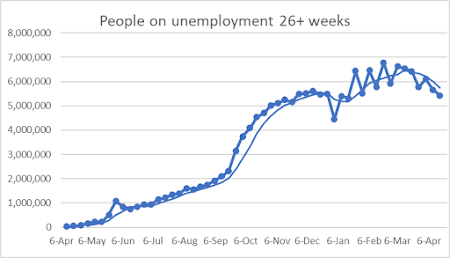 So how are Republicans reacting to all of this good news on the job market? By saying unemployment pays too much and it's keeping employers from getting workers! Here's the model legislation coming to an ALEC state near you.

Gov. Henry McMaster on Thursday ordered the state's workforce agency to stop participating in federal coronavirus unemployment benefit programs by the end of June. He framed it as a way to force people back to work.https://t.co/yqWafczzFu

Montana has also announced this in the last week that they are turning down the $300/week add-on that can be claimed (at no cost to the state) through Labor Day. I certainly have seen more "Help Wanted" signs at Madison-area eateries and other businesses recently, but I don't know if that's ramping up in anticipation of more business this Summer, or if there's more need today as vaccinations increase. However, we also know that there are still millions out of work, So what’s causing all the friction in the labor market?

What's that all add up to? In a nutshell, this: A National Federation of Independent Business survey showed a record 42% of small businesses had job openings they could not fill in March. Economists say that if employers need workers so badly, they would raise pay. So far, that's not happening. U.S. compensation rose more quickly than expected in the first quarter, but the boost came mostly from one-time bonuses to financial sector workers, and was not broadly shared. "The full sentence is 'I can't find workers at the wage I am willing to offer.' Full stop," said ADP chief economist Nela Richardson. "You can find workers."

And maybe a lot of Americans don't want to settle for crappy pay at a job that makes them more susceptible to a virus that is still floating out there. Especially when the last year has shown just how fraudulent a lot of this system truly is. We'll get more insight with tomorrow's jobs report. It'll be big, but how big and how that is affecting wages is going to be what to look for. And to see if the jobs continue to pick up as the record pace of layoffs slows down (but is still well above where we were before COVID).
Posted by Jake formerly of the LP at 8:18:00 PM