It's cute that a top exec at Kwik Trip is the Chairman of the Board WMC. You think Kwik Trip would love having Wisconsinites continue to have more money to spend on things. Let me remind you of the actual data, starting with the $400 add-on that was part of the bill outgoing President Trump signed in late December, and then the $300/week add-on that came in for March. Oddly, you didn't see the WMC crowd complaining about the add-on for unemployment benefits until the last few weeks, which just happen to coincide with the time right after President Biden got the stimulus package passed into law. And the RW complaints seem especially off-base, because the last two months have been much better for job growth in Wisconsin than the 3 before then. 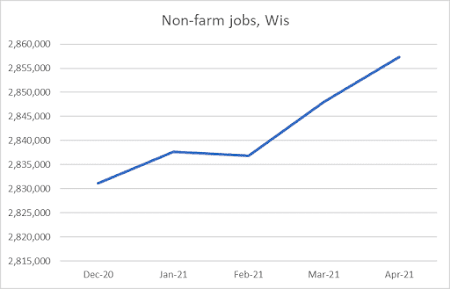 And in March and April, nearly 16,000 Wisconsinites entered the workforce, and just over 13,000 of them got jobs. 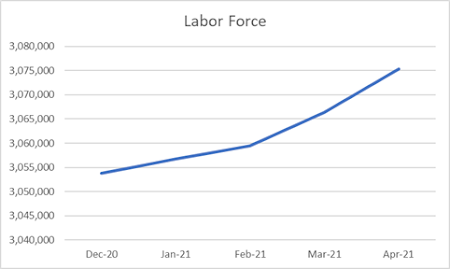 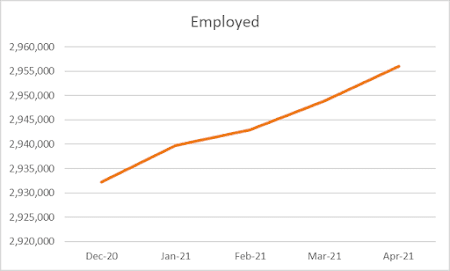 If WMC and other WisGOP hacks were correct, we'd be seeing these numbers stagnate or even decline, instead of picking up steam. Bruce Thompson also examined this question at his Data Wonk column at Urban Milwaukee, and took a look at the leisure and hospitality sectors, where many of these anecdotal "we can't find workers" complaints seem to be coming from. Wisconsin's lost jobs in the sector like the rest of America, but it also has gained back some of those losses, especially in recent months.

Put another way, the Wisconsin leisure and hospitality industry is down 58,000 jobs from its pre-pandemic size. During that period the Wisconsin labor force shrank by almost 20,000—3,400 more unemployed and 16,000 who left the labor force. The remaining 38,000 most likely found jobs in other sectors. Many are unlikely to come back.

I suspect that many of the people who had filled those jobs are not returning because they have found other jobs, helping to explain the difficulties businesses in that sector have had in filling them. Perhaps a period of enforced joblessness gave them the chance to think about what they really want to do with their life. Republicans have jumped to the conclusion that workers are missing because they do better with unemployment benefits. What we need is data on where those losing their jobs in the pandemic have gone.

While I agree that it would be great to center in on what's happened to all the people who lost their jobs and compare where they're working now vs Feb 2020, the macro data does seem to give a lot of good information. Someone's hiring out there, and more Wisconsinites are looking to be hired. If higher unemployment payments were encouraging people to stay at home, why do unemployment claims keep falling in Wisconsin, especially among continuing "regular" claims? 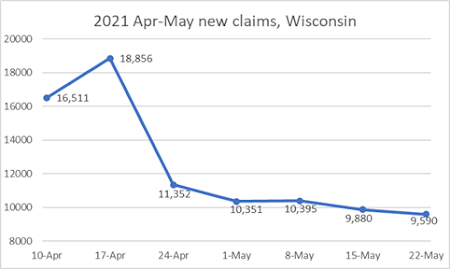 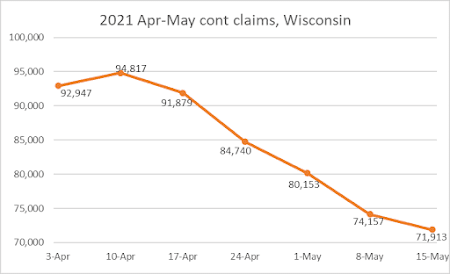 So to me, it seems like the problem is with cheapo employers who were glad to lay off workers as COVID hit last year, but can't get people willing to accept the same terms in as Summer 2021 looms, COVID fades and the economy picks up. And boy are they whining now that the shoe is on the other foot!
Posted by Jake formerly of the LP at 12:09:00 PM