So I screwed around with some Wisconsin maps for redistricting, Assembly version (1 of 2)

With local Census figures redistricting looming, I noticed that the Dave's Redistricting site recently updated its data to 2019's population estimates. This not only includes the estimated changes in population between 2010 and 2019, but it also has the shapes of precincts that will be used in the 2020 Census. I'm not going to talk much about Wisconsin's Congressional map, as the only thing that matters there is how Ron Kind's district might look in Western Wisconsin, and if you want to include Janesville/Beloit in the Bryan Steil's district, or Mark Pocan's. Instead, we'll look at the State Legislative maps as they stand today, and compare them to what I drew up. Since I can't find a printed breakdown of the 2020 presidential results by legislative district, we will use the 2018 Governor's election, won by Tony Evers by 1.1%, so it makes for a good proxy of a 50-50 base. This post will go into the Assembly maps, but I'll follow up with another post on the Senate maps (there's a lot of info here). First, let's use the Daily Kos breakdown by Senate and Assembly district for the 2018 Governor's race as the starting point. Districts that were within 5 or 10 points should be considered at least mildly competitive. Now let's look at the current Assembly map. 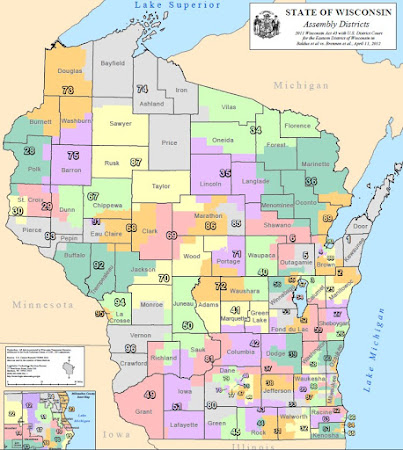 And in looking at 2018, you can see the GOP's gerrymander had a strong effect, as GOPs won an overwhelming majority of districts. 2018 Governor's Election, current Assembly map
Seats voting Walker (GOP) 63
Seats voting Evers (Dem) 36 Walker win 0-5% 5
Evers win 0-5% 1 Walker win 5%-10% 13
Evers win 5%-10% 2 Walker win 10%+ 45
Evers win 10%+ 33 Pretty good example of "packing and cracking", isn't it? In fact, the median seat in the 2018 Governor's race (District 55 in the Neenah-Menasha area), went to Walker by 8.75%. So Dems would have had to win by somewhere around 10% to be able to win a majority of districts, and a "neutral" year would result in GOPs holding the Assembly by a whopping 64-35 count. Now here's the map I drew up. I generally tried to keep common communities together and wanted to make sure there was an adequate number of majority-minority districts, but generally tried to ignore which party these communities vote for. 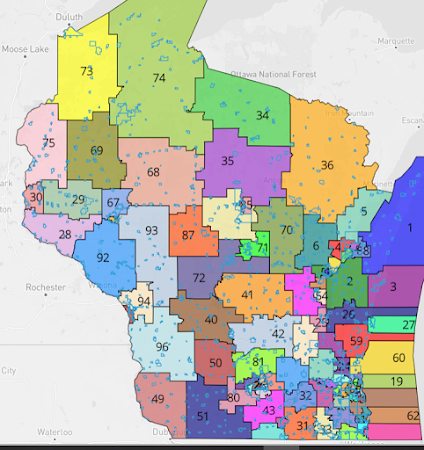 2018 Governor's Election, my Assembly map
Seats voting Walker (GOP) 58 (-5 vs current)
Seats voting Evers (Dem) 41 (+5) Walker win 0-5% 6 (+1)
Evers win 0-5% 5 (+4) Walker win 5%-10% 8 (-5)
Evers win 5%-10% 0 (-2) Walker win 10%+ 44 (-1)
Evers win 10%+ 36 (+3) You can see that while a neutral map still gives strong majorities to the GOP because there aren't any districts that they have which match the 80-90% numbers that Dems get in parts around Madison and Milwaukee, there are many more closer races - 11 decided by 5 points or less compared to 6 with the current maps. And it means that Dems would get the majority at a statewide total by winning by 7-8 instead of by 10, as the 50th seat in the Assembly is 2.2% less GOP than the current maps. The biggest differences are in the Milwaukee area, where Robbin' Vos and company tried to get cute in 2010, and would combine districts in western Milwaukee County with Waukesha County, and northern Milwaukee County with Ozaukee County. Hilariously, this backfired by 2020 as the suburbs turned against Trumpism, and Dems now control 3 of these districts, but it's still a ridiculous map that throws together communities that have little in common. 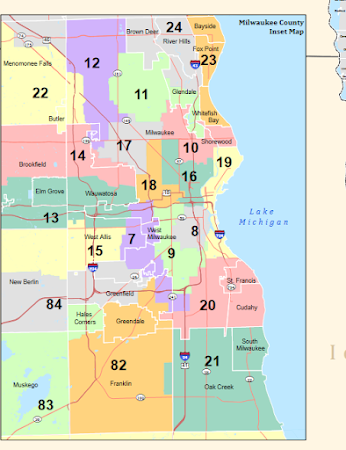 I decided to keep districts locked into one county and one community around Milwaukee as best as possible. 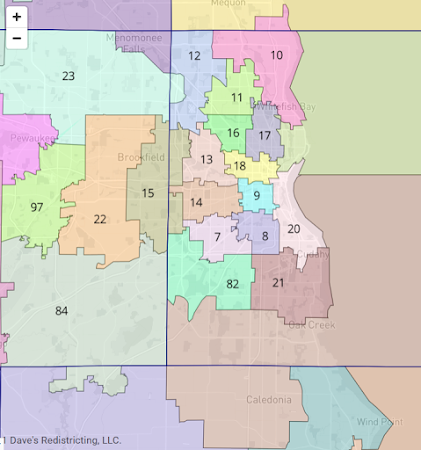 Interestingly, the population loss in Milwaukee County (and especially in certain areas of the City) means that my map might be slightly worse for Dems than what exists today. While North Shore suburbs like Whitefish Bay are now linked with Brown Deer instead of Mequon and Grafton, it also ends up taking away one district that's centered on the city's north side, and fewer districts touch the County in general. On the flip side, that might be a good thing, given the imperialist attitude that some of the gerrymandered GOPs have about the state's most populous county and economic engine. I also tightened up districts around Dane County and the surrounding area. Right now, the GOPs gerrymander has districts that stretch from Oconomowoc to eastern Dane County, and from Watertwon to DeForest. That makes no sense on any level, and combined with Dane County's population growth, I made these districts much more compact and sensible. 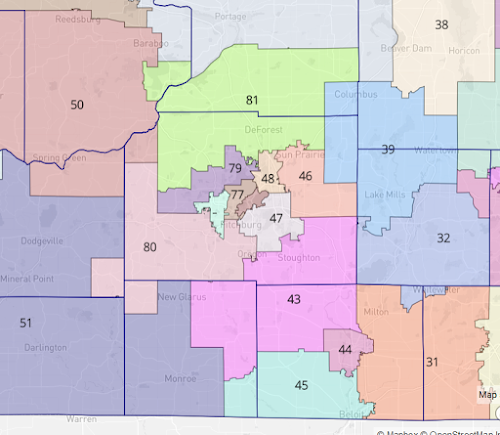 In the 920, I gave Sheboygan its own (very competitive) Assembly district vs being split in 2 like it is today, and tightened up districts around Green Bay, Appleton, and Wausau which makes this swingy area somewhat more competitive at the Assembly level (and will especially be so at the Senate level). 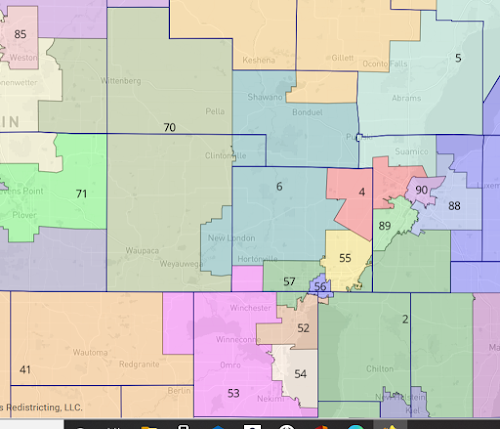 That's the Assembly version of my map-drawing. I'll put the Senate one in a new post, so it isn't so damn long. But feel free to give it a gander, and dial up the Dave's redistricting app to make up your own.
Posted by Jake formerly of the LP at 2:19:00 PM