An open letter to Jeff Tyler at WIBA-AM

Mr. Tyler-
As the program director at WIBA-AM, you are the one that decides what goes on the airwaves at a hallmark station in the fastest-growing city in the state. With that in mind, I would urge you to raise the level of your daytime broadcasts, and make some changes in what you present to the people of this area.

You decide to broadcast the racist, hate-filled filth of hosts such as Vicki McKenna, Rush Limbaugh, and Shawn Hannity. These programs often stoop to anti-minority race-baiting (as most recently seen in the protests in Ferguson, Missouri, and in the question of illegal immigration), and smears against unionism and other workers. These words and actions are disgusting enough, but worse is that much of it seems to be orchestrated by Republican politicians and right-wing interests, turning the shows from mere discussion and information, into outright propaganda.

John Doe documents have mentioned scripted interviews between Governor Scott Walker and Ms. McKenna, and Limbaugh and Hannity have been reported to receive huge sums of money to repeat talking points from Koch-funded organizations such as the Heritage Foundation. Your station is broadcasting hateful propaganda that has divided and paralyzed this country to levels not seen in at least 40 years, and therefore WIBA is not carrying out its duty under its FCC license to “broadcast in the public interest”. In addition, having 9 hours of right-wing propaganda limits the ability of your news staff to report on issues fairly, as they cannot be seen to upstage and/or reduce the hosts’ credibility (I’ve worked in the business, and I know that you cannot keep the houses talk and news separate, as much as we would like to think we can).

Look at the past few weeks, and ask yourself if this is acceptable. Hannity has advocated beating children with a strap and chided "politically correct liberals" for being concerned about the kids' well-being, and his show is chocked full of Islamo-phobia, including having the Dad from Duck Dynasty on his show to say that the way to deal with Islamic militants was "to covert or kill them." Rush has gone on the air to advocate for date rape, saying "no means yes if you know how to spot it", in a time where on-campus sexual assault is a growing concern. If these hosts were saying this stuff on an FM morning show, you'd never accept this, and the washed-up Limbaugh has become more ridiculous, hateful and embarrassing by the day as his ratings and sponsors dry up. Cut the cord with this garbage.

More locally, look at McKenna, who last month embarrassed your station by shrieking all over the airwaves about "slander" when her 1997 arrest record was brought to listeners' attention. This is not a person that can handle the responsibility of the stage that you give her - someone who constantly posts drunken, violent rants on Twitter and encourages listeners to harrass those that dare to give a dissenting opinion, including this memorable gem from last December. 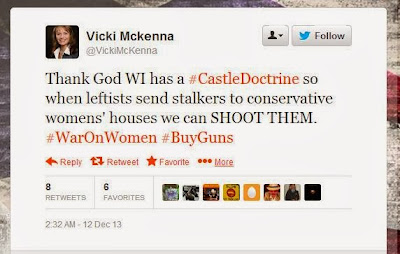 Then last week, we saw the story about racist Wisconsin whites threatening to send armed poll watchers to intimidate (minority) voters in "heavy democrat districts" where the voters "have a look about them." Naturally, these wimps backed off when the public got word of the plan and started reporting them the Department of Justice, and tried to claim they were "just kidding," but where do you think they get the idea that this kind of mentality is OK? The latest Marquette University poll shows that low-educated white males with mediocre jobs are pretty much the only non-rich group in Wisconsin supporting Scott Walker, and it is in no small part due to the uncorrected lies and hateful resentments that pour out of outlets such as yours.

On a side note, you fired Mitch Henck to cut costs but kept THAT? What is wrong with you?

You may claim that broadcasting these types of shows brings higher ratings, but that is a specious claim, as WIBA already has a large, built-in audience due to its decades-long establishment as a flagship station for local news, as well as carrying Badgers, Packers and Brewers games. Any host you have on will likely draw similar if not better ratings, solely because the average listener is often too lazy to change his or her pre-set habits. So it is a choice by you and the others at Clear Channel Madison to broadcast this often-false, always debasing programming to your listeners during the daytime hours, and it has played a significant role in soiling what was once a great state. You can reverse this by choosing to tone down the hate, remove these vile, no-talent propagandists, and improve the level of debate and discussion on your station. You can even choose to keep the hosts conservative (despite the fact that it flies in the face of what most people in your listening area agree with), as long as the on-air talent doesn’t lie and constantly smear those they disagree with.

If you choose not to go this route, I and several others are more than willing to respond with a billboard campaign discouraging people from listening to your station, with a punch-line of “After the game, TURN OFF HATE RADIO 1310.” We will also identify advertisers who decide to associate with such hate-talk, and make it clear to casual people in the listening area that those businesses have no problem with such divisive, denigrating shows. We are near a breaking point in this country, and you are helping to break it by continuing to have WIBA-AM be a one-sided propaganda machine instead of the “news-talk leader" you claim to be. If you choose to continue on that path, we will have to take you down with the others in this state’s Wrecking Crew, and it won’t be nice for you to go through, nor will it be the pleasant for the community that we both call home.

Or you can reverse your course, raise the game at your station, and everybody ends up better off (well, except for the hate-mongerers and the GOP politicians who support them behind the scenes). You’ve got a month to decide.