Yeah, the updated jobs figures don't look so great for Walker either

Been tied up taking advantage of a great football weekend in Wisconsin, but here's quick rundown of stats from the state-by-state jobs report released yesterday by the Bureau of Labor Statistics. First of all, only 5 states lost more private sector jobs in August than Wisconsin’s 4,300. They were Michigan (-9,200), Ohio (-8,000), Massachusetts (-6,800), Mississippi (-5,200) and New Hampshire (-4,700). Interestingly, Midwest neighbors Illinois (+13,000), Minnesota (+5,700), and Iowa (+2,800) each had sizable private sector job gains last month while we were falling behind.

But obviously one month is a small sample size. Let’s see where we’ve been since March, since that was the end date of the Quarterly Census on Employment and Wages, and put these two figures together to get a big-picture comparison over the last 3 ½ years. We’ll start with the private sector job figures since March 2014, and then work back from there.

Given that Minnesota has fewer people employed than Wisconsin (although the gap is closing), this means we are 6th out of 7 in the last 5 months for private sector job growth- still in the ditch. So now let’s add it to yesterday’s “gold standard” report, and see what this brings us to. Ohio’s drop becomes pretty obvious on this chart. 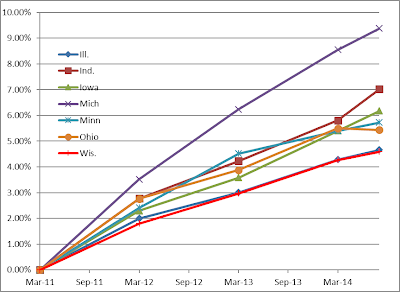 Yes, that red line is Wisconsin, and we’re still DEAD LAST since Act 10 was jammed through the Legislature. In fact, we’re a little further behind the FIBs than we were when I ran the March numbers on Thursday (0.07% behind Ill vs 0.01% through March). And no matter how many right-wing memes Dan Bice chases and gives a megaphone to on the pages of the Journal-Sentinel (what a disgrace that guy’s becoming), it can’t hide the fact that Scott Walker has failed miserably at the one thing he promised to do in 2010 and 2012- add jobs by making Wisconsin “Open for Corruption Business.”

Heck, even Politi-crap had to admit this week that their boy Scotty will fall far short of his signature promise of 250,000 private sector jobs, and you know it had to have killed editor Greg Borowski and writer Tom Kertscher to do that. And even in that Politi-crap admission, they try to include the Madison area as having "weak growth", but the QCEW shows that us dirty socialist hippies in Dane County have added 14,100 private sector jobs in the last 3 years- more than 1/6 of the state's total. Not bad for a place that's still less than 1/10 of the state's population. Maybe instead of denigrating Mary Burke as a "Madison liberal" and knocking Dane County for refusing to use the tools of Act 10, maybe the rest of the state could learn something from the place that's growing a whole lot better than much of the rest of the state.

And maybe we need to remind folks that Scott Walker's policies of ignoring reality and deciding to use trickle-down and "pay-for-play" as a job-development strategy isn't a very good idea. Maybe we need someone in charge who believes in a high quality of life that attracts TALENT and ENTREPRENEURSHIP instead of giving handouts to greedy corporations in the hopes that they might one day give the average person a crumb or two. Just a thought.
Posted by Jake formerly of the LP at 3:54:00 PM