Wisconsin- still DEAD LAST for jobs, and dropping in 2014

Both Wisconsin jobs reports that were released today gave some added information on the failures of the Fitzwalkerstanis. We'll get to the "gold standard" report in a minute, but let's start with the current-day, as the Wisconsin Department of Workforce Development released the August jobs numbers this morning. Not surprisingly, the Walker Administration's report promoted a drop in the state's unemployment rate of 5.8% to 5.6% (it's actually a drop of 0.12%, from 5.77% to 5.6499%, but as you'll see, the Walker boys need all the breaks they can get). And the reason they led with the change in the unemployment rate is because of this other part of the report.

...The number of private sector jobs declined by 4,300 from July to August on a preliminary basis (seasonally adjusted), which is within the margin of error for the monthly series.

Let's repeat that. WE LOST 4,300 JOBS LAST MONTH. That's the fifth time in the 8 months of 2014 that Wisconsin has lost private sector jobs in this survey, and even with an upward revision in July of 2,100 jobs, that still leaves us 2,200 jobs below where we thought we were going into today. This means we've only added 8,800 jobs in the first 8 months of 2014, putting it on pace to be by the state's slowest job growth in Walker's 4 years. And it blows the Walker jobs gap up to near 73,000 in the 3 1/2 years of this guy's reign of error. 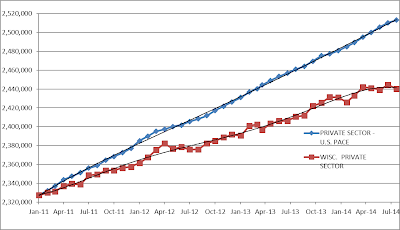 Now, let's take a look at the QCEW numbers, and the spin by Walker cheerleader and DWD Secretary Reggie Newson is quite pathetic.

"Our ongoing efforts to grow Wisconsin’s economy and develop the workforce helped the private sector create jobs at a faster rate than two of our Midwest neighbors – Minnesota and Illinois – during the 12-month period ending in March 2014," Department of Workforce Development (DWD) Secretary Reggie Newson said. "The addition of over 28,700 private sector jobs during this time means more opportunities for Wisconsin's workforce and is in line with many other indicators showing our state's economy continues to grow and add jobs."

Wow, we beat two states in our region over these 12 months! How'd we do against the other 4? Oh, not so good.

So the Walker Administration is trying to claim that having slightly more private sector job growth than Illinois and Minnesota means that we're doing OK and that we've somehow "turned the corner" when it comes to job growth. Uhhh, NO. We still trail the rest of the Midwest over the last 12 months measured, and as you can see Wisconsin's private sector job growth is still well short of what it was before Act 10 was passed in March 2011. 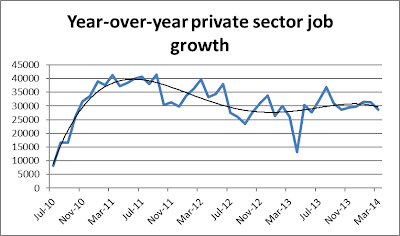 As you'll also see, Minnesota's low job growth from March 2013 to March 2014 is a case of taking a breather after a hot job market in the previous two years, as they were second in the Midwest for private sector job growth from 2011-2013, and are middle of the pack for the last 3 years. By comparison, Wisconsin is still DEAD LAST in the three years since Act 10 was jammed through the Legislature in March 2011. 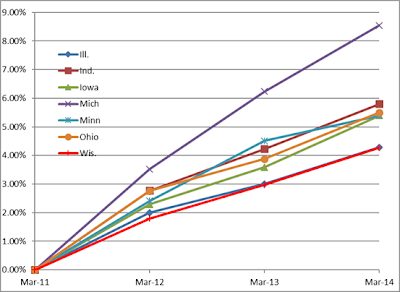 Geez, with these crappy numbers, no wonder Walker's releasing two desperate ads today, including one against Obamacare (despite the fact that strong majorities of Wisconsinites want expanded Medicaid), and one touting "tax savings." Well, we've seen the result of all those Walker "tax-savings" moves- well below-par job growth and a budget deficit that seems to be blowing up by the day.

Keep talking WisGOP. You look more failed by the day.
Posted by Jake formerly of the LP at 9:38:00 PM