Despite the repeated avoidance by Gov Scott Walker and the Wisconsin GOP to mention how they will solve our budget problems in Wisconsin, reality keeps intruding on that. Department budget requests show that at least $1.1 billion in new spending has been requested just to keep these programs operating as is. And if you look at how that $1.1 billion is split up, one area in particular stands out. 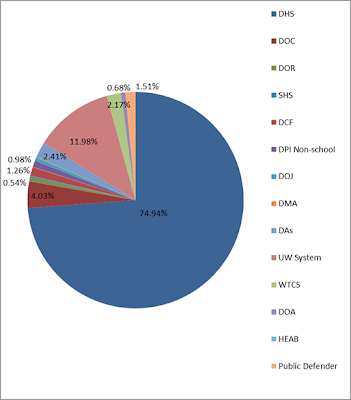 That giant blue circle that takes up ¾ of the pie is the increase required to allow the Department of Health Services to keep giving the same services in 2015-17 that they are today- just over $831.5 million. This number assumes that the state continues to follow Scott Walker’s policy of refusing to expand Medicaid and comply with Obamacare, a fiscally foolish decision that has already cost state taxpayers hundreds of millions of dollars, and as the Wisconsin Budget Project notes, will cost us a whole lot more if we stay on the Walker Way.

To sum up, the [Legislative] Fiscal Bureau estimated in August that expanding BadgerCare to 138% of the federal poverty level would save state taxpayers $261 million to $315 million in the next biennium, even if the expansion doesn’t take effect until January 2016. Based on the latest enrollment estimates in the DHS budget request and their assumptions about the federal match rate, we estimate that the lower end of the potential savings is $31 million GPR more than the LFB indicated (or $41 million more if the change took effect by July 1, 2015). To close the $760 million hole in the Medicaid budget, it’s critically important for Wisconsin to expand BadgerCare and accept the increased federal funding.

So in other words, expanding Medicaid as part of the 2015-17 budget would reduce the projected 2015-17 deficit by at least $300 million, or more than ¼ of the funds needed in order to fill these budget requests.

And that’s before you start counting any extra funding that may be needed for either public schools or (if Governor Walker wins) an expansion of the voucher program. Those costs weren’t included in the Department of Public Instruction’s request, so I’d count on that $1.1 billion figure going even higher. The fact that Walker wants to spend even more on unaccountable vouchers was something that Dem candidate Mary Burke hit mentioned at an education policy forum in Madison yesterday. Burke used DPI stats that indicate a statewide expansion of vouchers would increase the number of families getting payments in the program more than sixfold (to nearly 193,000), said that it would inevitably lead to cuts to public schools.

Burke pointed to a $1.2 billion projected total annual cost of the voucher system if it expanded, which she said would likely be at the expense of programs and teachers in public schools.

“We’re all smart enough to realize that if there’s a certain amount of funding that is going to the voucher program, unless the taxes are raised to pay for that or it comes from another part of the budget, it’s going to come from the public schools,” Burke said.

“What we need to do is make sure every parent and every child has a great choice in their neighborhood schools.”

Compared to the $200 million we currently spend on vouchers (with subpar results), that’s another $1 billion to add to the multi-billion dollars in budget holes that would have to be made up in a second Walker term.

And as State Sen. Kathleen Vinehout has brought up, the school districts in the state that would likely take the biggest hits under any further GOP voucher expansion are the rural public schools that have no market or need for vouchers, but would still face major reductions in state aids, leading to higher property taxes and closed schools. Several of these districts have had or will have referenda asking to raise property taxes just to perform upkeep and keep the lights on, let alone improve facilities or change to meet current-day needs. And with Burke gaining on Walker in rural areas that Scotty dominated in 2010 and 2012, it’s not hard to think a big reason why is that people in small-town Wisconsin are catching onto what a screwjob vouchers are for their schools and communities.

So another day means more evidence that Wrong-Way Walker and his band of WisGOPs have put this state down in the hole, and as much as they try to spin the situation with rosy assumptions, the mess will still be there, and it will have to be cleaned up in the coming months.

P.S. Here's more from Sen. Vinehout on the voucher program, in particular how these schools don't do any better on tests, but do succeed in directly subsidizing students and parents who already attend these schools, while stealing funds from public schools. She assumes 120,000 students would take vouchers statewide, at a cost of $677 million a year- both are less than Burke's numbers, but still a whole lot of money for a second publically-funded school system. And the last paragraph is a direct shot at Walker and WisGOP's plans.