J-S tries again to Politi-crap us on the budget

I'm really getting tired of having to correct the Journal-Sentinel's Wisconsin Politi-"fact", but apparently I still have to, based on two awful analyses that seem to indicate that the corporate owners of the J-S have given orders to skew their ratings to favor the Wisconsin GOP as much as possible.

"Wisconsin does not have a deficit," Darling said in a news release, which was issued with GOP Rep. John Nygren of Marinette. "Thanks to Republican reforms, the 2014 budget will begin with a $443 million surplus."

First, Politi-crap's Tom Kertscher accepts that $443 million number as fact, and THAT IS WRONG. The assumption is based on the $281 million revenue shortfall from Fiscal Year 2014 being combined with the projected year-end surplus of $724 million, as illustrated by the One Wisconsin Now whiteboard. 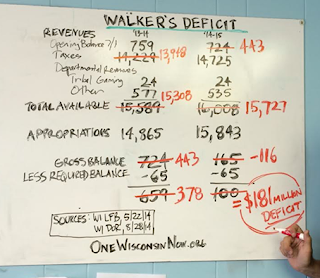 But there are a whole lot more variables that go into that year-end number. See that Tribal Gaming figure? We now know that much of that $24 million didn't come in for FY 2014, because the Potawatomi skipped their payment to the state in payback for Gov Walker trying to shake down tribes for campaign donations in return for approval of a casino in Kenosha. We also have not seen the final expense numbers for Fiscal Year 2014, because that's part of the state's Annual Fiscal Report (AFR), which won't be released for another month. Given that we already know that we have a sizable shortfall in Medicaid, and the higher plowing and energy costs from the polar vortex winter, it is likely that expense number will be higher than what was projected.

So how can "$443 million year-end surplus" possibly be accepted as fact with these variables hanging out there? I sure wouldn't do that, but Politi-crap's Tom Kertscher does in making his "analysis". Strike one.

Here's the next screw-up. We CURRENTLY DO HAVE A DEFICIT, because we're not in fiscal year 2014 anymore - Fiscal Year 2014 ended on June 30. Sure that's semantics, but Politi-crap has frequently downgraded claims for wrong verb tense (especially if they come from Dems). We are now in Fiscal Year 2015, which is projected to look as follows, based on the most recent LFB release.

We do not know for sure that we ended the year with a $443 million surplus, that's just a projection based on revenues only. And the State of Wisconsin's General Fund is slated to spend more than it takes in for Fiscal Year 2015, and end the two-year budget with a negative balance. That is a deficit both ways. These are not debatable figures, but Kertscher and Politi-crap somehow makes it debatable.

Darling’s statement is partially accurate, but leaves out a lot of context. Our rating is Half True.

GARBAGE! A "$443 million surplus" is "mostly false" at best, for reasons shown above.

2. Now compare this to another analysis Politi-crap pulled in light of a comment that Senate Dem leader Chris Larson made.

So Kerstcher and company asked "Where does the number come from?" And the answer is relatively simple.

But breaking down the size of the projected deficit to a per-person level in no way means individuals or families will have to pay those amounts.

In fact, Larson spokesman Fred Ludwig told us Larson was referring to "cost" in a broad sense -- that a $1.8 billion shortfall would mean people would experience either tax increases or cuts in services....

Larson said: "Over the next two years, this $1.8 billion deficit will cost individual Wisconsinites $300 each, or $1,200 for families of four."

No decisions will be made until well after the November 2014 elections on whether to raise revenue or cut spending in order to close the $1.8 billion gap, which is an estimate for the 2015-’17 state budget cycle. And it’s possible that, based on tax collections, the $1.8 billion figure could change.

WHAT THE FUCK? In the Darling case, Politi-crap just accepts the claim of a $443 million surplus without the caveat that those numbers could be different when the AFR comes out in October. But when Larson gives the $1.8 Billion projection, then Kertscher and company says "Well, those numbers could be different." What's with the double-standard? And instead of doing straight-up division, NOW Politi-crap is adding in details like "burden of taxes" or "targeted spending", and saying that doesn't necessarily apply. I'm not saying it's bad to do so (we should consider that when we talk about fiscal policy), but Politi-crap sure didn't care about variables when they analyzed Dingbat Darling's statements.

That is pathetic, and I reiterate my conclusion about Politi-crap that I made last month (ironically, in an article that was later quoted by Politi-crap backing up my claims). These guys are under orders from their management at JournalComm to make the blatant lies of Walker and WisGOP somehow equivalent to the fact-based spin of Burke and the Dems, in an obvious attempt to curry favor with the right-wing elements that stand to give JournalComm big ad money over the next 2 months.

It is disgraceful, and Mr. Kertscher, the scope is on you, because you know better than this. You can tweet him at @tkertscher or email him at tkertscher@journalsentinel.com, and find out why this guy's refusing to play it fair.