Consumer sentiment and house prices dip, but so does the trade deficit. So do we worry?

If you’re in the category of believing that our recent interest rate inversion is a reflection of a US economy slowing and possibly heading into recession, this bit of news from Tuesday is something that should buffer your case.

The consumer confidence index dropped to 124.1 from 131.4 in February, the Conference Board said Tuesday. That’s the second lowest rate in a year….

The so-called present situation index sank 12 points 160.6, marking the biggest one-month decline since the middle of the last recession in 2008.

Another measure of how Americans think the economy will be six months from now posted a smaller 4-point drop to 99.8.

A different indicator which makes me wonder if things might be hitting a wall came on that same day when we got an indication that the mini-boom in housing might be nearing an end.

The report's results showed that January 2019 saw an annual increase of 4.3% for home prices nationwide, inching backwards from the previous month's report…

“In the year to January, the S&P CoreLogic Case-Shiller National Index rose 4.3%, two percentage points slower than its pace in January 2018,” Blitzer said. “The last time it advanced this slowly was April 2015. In 16 of the 20 cities tracked, price gains were smaller in January 2019 than in January 2018. Only Phoenix saw any appreciable acceleration.”

In fact, some cities where prices surged in 2017-2018 now face much smaller increases. An example is Seattle, where annual price gains dropped from 12.8% to 4.1% from January 2018 to January 2019. Furthermore, San Francisco saw annual price increases shrink from 10.2% to 1.8% over the same time period, according to Blitzer.

But if there’s a flip side to that news, it’s that if you combine it with the lower long-term interest rates, then houses become more affordable for people. Which helps explain this report from Wednesday.

So maybe the bubble is being reinflated with this recent inversion? And is that really going to be good for us in a year, when either rates have gone back up (and slow that activity) or the economy is in recession (which also would slow that activity)? 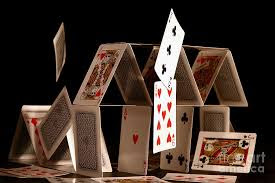 Not sayin' it is. I'm just sayin' it can look that way.
Another report that got added attention on Wednesday revealed that the US’s trade deficit shrunk in January after a sizable jump to end 2018. But the reason why might not be so great.

The U.S. Census Bureau and the U.S. Bureau of Economic Analysis announced today that the goods and services deficit was $51.1 billion in January, down $8.8 billion from $59.9 billion in December, revised.

But if you remove soybeans sent to China ($0.91 billion) and cars and trucks ($1.025 billion), total exports was flat. And the decline in imports reflects a sizable drop in household goods and furniture (-$1.25 billion) and computers and semiconductors (-$1.67 billion), which both may reflect a slowdown in consumer spending, and a need to lower the inventories that have been rising for the last 6-9 months.

To me, these economic reports raises the stakes of this week’s income and spending report for February, to see if people were starting to clamp down in anticipation of lower tax refunds from the GOP Tax Scam (or if the lousy weather kept people in). In addition, I want to see what (likely downward) revisions are made to the Q4 GDP numbers tomorrow, as the first report came out before we knew of the big December jump in the trade deficit and other reports showing end-year shakiness.

And I don’t see where continuing the low-rate coke party on Wall Street is going to translate into much in the real economy, which needs to pick up as the hangover from the GOP Tax Scam slams people’s pocketbooks at the start of 2019. We may not be in economic decline yet, but the reports from this week give you an idea about how we get there.
Posted by Jake formerly of the LP at 6:56:00 PM