Wisconsin manufacturing jobs keep falling behind. Why do they still need their tax cut, again?

Among many areas of concern is the economy these days was evidence of softening in the job market. While I noted that the meager growth of 20,000 jobs in February may simply be due to brutal weather and a balancing out of an allegedly strong January 2019, that really hasn't been the case closer to home.

Wisconsin’s job situation was already weak in 2018, with growth revised down to less than 1% for the year. And to start 2019, things deterioriated further, based on this week’s state jobs report.

Yet WisGOPs are running around claiming the massive tax cut to manufacturers that’s been in effect for manufacturers in that time is necessary and a “job-creator”? Give me a break. This analysis and chart from UW-Madison's Menzie Chinn shows the before-and-after in manufacturing job growth since the $225 million-a-year Walker/WisGOP tax cut for manufacturers has been in place. 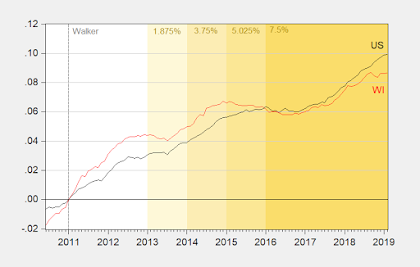 In fact, it shows that 2018 was a year manufacturing-heavy Wisconsin actually fell behind the US rate of job growth. We just weren't told of that until after the November election, when totals were benchmarked to the "gold standard" Quarterly Census of Employment and Wages (QCEW). And the declines reported in January and February should make you wonder if the change in administrations in Madison is causing a more honest accounting of manufacturing jobs in the state (or at least it should).

So no matter what BS Noah Williams and the Koched-up hacks in WisGOP World are making up and trying to sell you, it's pretty evident that there has been no correlation between the major tax cut to manufacturers and job creation in Wisconsin. In fact, I'd likely be more accurate if I claimed it's causing a negative effect due to the encouragement of more profit-hoarding by CEOs.

And now if this week's interest rate revision is as indicative as it’s been over the last 40 years, it means that an official recession will start by this time next year. So I certainly don't see where it helps to be giving preferential treatment to a group of businesses that haven't done anything to hold up their end of the bargain. Especially if available resources for schools and road repairs drop due to the lack of activity, there's no way those oligarchs should be allowed to continue their free ride.