Foxconn claims it'll build a factory by 2020. We should hope they don't

Despite falling behind schedule, Foxconn is sticking with their claims that they’ll actually make something in Racine County.

Foxconn Technology Group (Foxconn) today announced the next steps in construction of its Gen6 advanced manufacturing facility in the Wisconn Valley Science and Technology Park in Racine County, Wisconsin. The next phases of construction will begin by Summer 2019 and the facility will begin production in the 4th quarter of 2020.

“Our commitment from day one has been to establish a winning formula for Foxconn and for Wisconsin,” said Dr. Louis Woo, Special Assistant to Foxconn Founder and CEO Terry Gou. “We continue to expand our presence around the state, create jobs, and deepen our partnerships while innovating and adapting to meet changing market needs. We’re investing in Wisconsin because we know manufacturing here is going to drive even greater success and growth for Foxconn and for the community.”

The initial Gen6 facility will manufacture LCD screens for use in a variety of product applications, including vertical solutions for industries such as education, medical and healthcare, entertainment and sports, security, and smart cities. The plant is expected to begin production in the 4th quarter of 2020.

Of course, the Racine County plant was supposed to be a Gen 10.5 factory making much larger panels, and was supposed to include a separate glass factory, so this is already significantly downsized from the promises made in the last groundbreaking at Foxconn. And at least one of these guys probably knew that at the time. 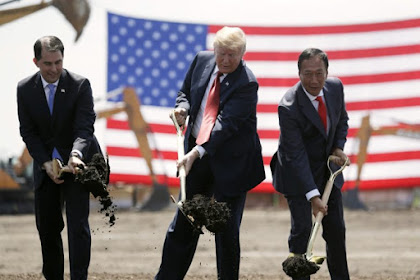 You may think this is good news, that at least we aren’t left with a giant vacant field in Mount Pleasant. But it is not. It’s actually Foxconn maximizing the handout in the short term with the least amount of jobs possible.

Allegedly as many as 1,500 people might work at the plant, and while you should be rolling your eyes at that claim given the multitude of times Foxconn and WisGOP hacks have lied about this, remember that Foxconn’s “workforce” counts anyone who works for the company throughout the state (or beyond?). Then note the minimums required to get the full tax writeoffs from Wisconsin.

So if Foxconn has a few people working seasonally, counts anyone associated with Foxconn’s Wisconsin “projects”, and has their connected contractors run up the bill to $2 billion in total “investment”, and they can get $300 million for the factory and $80 million or so in jobs.

The timing is quite convenient as well, promising the factory to be open “in the 4th Quarter of 2020” – right before the presidential election so another photo op can take place. Or so Foxconn can quietly admit after the election that the high numbers of jobs and commerce isn’t quite going to work out, as they did after this November’s election.

Soon after that 2020 election, it seems highly likely that Foxconn would automate the overwhelming majority of whatever work force may be at this Gen 6 factory, and dare the State of Wisconsin to claw back their money after 2023 (which is the earliest date it can happen according to the contract). 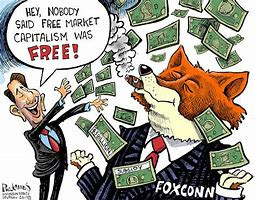 Which proves yet again that the best thing that could happen for Wisconsin is if this expansion at Foxconn doesn’t happen, and they go away. If we get 1,900 jobs throughout Wisconsin, that would be a state cost of $380 million is a cool $200,000 a job, and that doesn’t even count the $1 billion+ more in infrastructure and local subsidies that have been handed out.

Cutting these guys a check of $100 mil (or forcing a court settlement along those lines) to have them clear out would be preferable than the massive amount of money we would stand to pay for these short-time jobs. Of all the lies told with the Fox-con, the biggest one is that we need to spend all of this money to add jobs - the growth may well have appeared without the massive WEDC handouts and local kickbacks.

So let's find out if someone else can make it in Racine County. Use the massive amounts of acres that have been cleared in Racine County for businesses that actually are invested in and want to grow in Wisconsin, instead of grifting off of sweetheart deals from gullible/crooked GOP politicians. I understand there's a giant convention in Milwaukee for the Summer of 2020 that could use some extra lodging. Seems like a win-win solution, doesn't it?
Posted by Jake formerly of the LP at 7:00:00 AM