The economic outlook is back! And tells a tale of Wisconsin's subpar record

Among many improvements with the start of the Evers Administration was one that came out on Friday- the return of The Wisconsin Economic Outlook from the Department of Revenue! As the state continued to fall farther behind during the Age of Fitzwalkerstan, the Walker Administration stopped distributing this quarterly report 4 years ago. But now that Evers is in office, this analysis has returned.

In addition to a look ahead at what it thinks Wisconsin's economy will look like for the next two years, the DOR's Economic Outlook also looks at the state's recent economic history. And it's not so good. 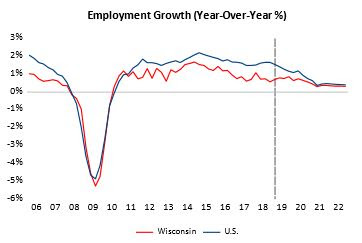 On the positive side, the DOR report indicates that Wisconsin's unemployment rate will continue to be around 1% below the US rate, as it has been for most of the last 10 years. But the trend of lower wage growth is also expected to continue (and yes, I find this to be an oddity).

Despite those lagging numbers, the DOR's Economic Outlook says that the state's revenue picture is in line with expectations, with 4 months left in the 2019 Fiscal Year.

Lastly, the Economic Outlook also notes that Wisconsin has fallen behind the country on it's growth in economic output, and that situation isn't expected to change much either.


Given that we reached an interest rate inversion on Friday, which has reliably called every recession in the last 40 years, I'd say those GDP predictions may be a bit, ahem, aggressive.

But it's nice to see honest analysis return to state government, instead of campaign propaganda at taxpayer expense, and bad news being hidden. Let's hope it's yet another sign that Wisconsin is taking steps back toward the decent, open governance that we deserve.