As we wait for the Legislative Fiscal Bureau to release its summary of Governor Evers' first budget, I wanted space to step back and go over another area where I think Evers may be asking too much - tax changes.

It's not that Evers is wrong to ask for a lot of these things- as you'll see, I think many of the provisions do a good job in trying to re-level a playing field that has been slanted far towards the rich and corporate and away from the vast majority of the rest of us. I'll start by pointing out the tax cuts, which are targeted toward the middle and working classes, and also discuss the costs of these tax cuts.

Evers also wants to make a tax shift that moves the income tax cut passed by the WisGOPs in the Lame Duck Session from one that gives more to the rich, and redirects it so that all taxpayers get a similar tax cut. This is described in the official budget summary as follows.


The Governor recommends modifying the current law automatic individual income tax rate reductions associated with increased sales and use tax collections from remote Internet sellers, resulting from a U.S. Supreme Court decision, to focus the entirety of the cut on the lowest individual income tax bracket.

That makes for quite a bit of tax relief for people on the lower 80% of the income scale. And it is more than offset by targeted tax increases on other organizations and individuals.

These 3 items all reverse Walker/WisGOPs giveaways to the rich, corporate and DeVos-paid voucher school backers. All are pretty good ideas, and if that was all we had, the net effect on revenue would be an increase of around $120 million over the 2 years - much less than the $320 million saved through taking Medicaid expansion.

But then more is needed to pay for expanded health services, restoring the Fitzwalkerstani cuts to K-12 funding for public schools, and giving more aids to local governments.

So more revenue is needed. The next 2 revenue raisers are relatively straightforward, as they clarify and streamline certain provisions, and I'll go back to quoting the budget document to describe them.

The Governor recommends clarifying current law to explicitly require Internet marketplace providers to collect and remit sales and use tax on taxable sales facilitated by the marketplace on behalf of third parties. This provision is expected to increase collection of taxes already owed to the state by $26.8 million in FY20 and $67.1 million in FY21.

The Governor recommends the imposition of a tobacco products tax on vapor products at the rate of 71 percent of the manufacturer's list price. The tax would also apply to any cartridge or container of any solution, which may or may not contain nicotine, that is intended to be used with an electronic cigarette or similar product. The fiscal impact is an estimated increase in tax revenue of $14.9 million for FY20 and $19.8 million in FY21.

Plus there is another $6.8 million from charging cigarette tax on little cigars.

That's still not really a big deal. While I doubt the Koched-up WisGOPs would have signed off on many of these tax increases, they certainly would have been put on the defensive to do so if that's all that was in the budget. Most Wisconsinites wouldn’t be affected by any of these tax increases, but many more would receive a tax break under these provisions, and there would still be nearly $255 million more to use for schools or Scottholes or whatever. And that’s before we talk about the $325 million saved from Medicaid expansion.

But I fear this part of Evers' budget is going to hit a lot more Wisconsinites, which will allow the GOP to have a much easier talking point of “look at all these tax hikes”.

That’s a $362.5 million run up on items that aren’t adequately identified. And I fear that the LFB will show that much of it will hit workign and middle-class Wisconsinites who have lost the usefulness of their itemized deductions from the GOP's federal Tax Scam (as many of you are likely aware of if you have filed your taxes).

Those last tax hikes may make it far too easy for the GOP to say “Forget it, throw it all out. It’s $1.3 billion in added taxes, herpy derpy yadda yadda.” It also takes away the card that Evers played when he rightfully vetoed WisGOP's unfunded tax cut last month, because the added investments in Evers' budget result in a structural deficit just like the WisGOP tax cut did, even with these tax increases. 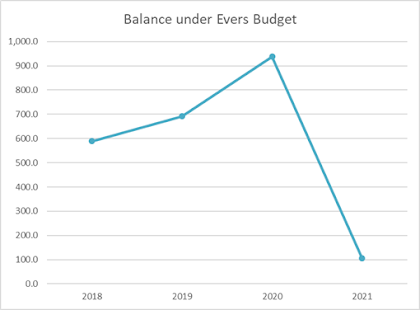 It seems like an unforced error, just like I argued that the last few spending items (or decision not to cut spending on GOP giveaways like vouchers) will make a major difference in the bottom line. Which threatens to spoil the image of what is generally a good, progressive budget that tries to reverse some of the damage of the past.

Maybe the plan was for Evers to "go big" and compromise down from there, and while I appreciate that idea (it's not like WisGOP is going to be reasonable no matter what you do), I think a few limits here and there would do a lot for the public opinion battle. And let's face it, much of what is in this budget debate comes down to PR at this point, and likely will stay that way for the next 2 years. So why give dishonest WisGOPs something to jump on when it's not really needed?
Posted by Jake formerly of the LP at 8:57:00 PM