If you're freaked about inflation, you're buying the hype over the reality

As inflation becomes a top economic concern voiced by Americans, you can bet there will be another month of "concerns" over rising prices after Friday's Consumer Price Index came out.

Inflation accelerated at its fastest pace since 1982 in November, the Labor Department said Friday, putting pressure on the economic recovery and raising the stakes for the Federal Reserve. The consumer price index, which measures the cost of a wide-ranging basket of goods and services, rose 0.8% for the month, good for a 6.8% pace on a year over year basis and the fastest rate since June 1982. Excluding food and energy prices, so-called core CPI was up 0.5% for the month and 4.9% from a year ago, which itself was the sharpest pickup since mid-1991.

But it's also worth mentioning that many Americans are seeing raises that are keeping up with those price increases, especially at the lowest ends of the wage scale. And as I noted previously, the jobs report from earlier this month showed some workers have been able to get double-digit wage increases over the last 12 months. Year-over-year change, Average hourly wage, Nov 2020- Nov 2021
Leisure and Hospitality +13.4% (+$1.97 per hour)
Education and Health Services +7.4% (+$1.92 per hour)
Retail Trade +5.25% (+$0.94 per hour) It's the higher end of the wage scale that is more likely to see wages not keep up with inflation, but those people are also much more likely to benefit from a stock market that is seeing double-digit gains. And new unemployment claims are at their lowest levels in more than 50 years, so rising prices aren't forcing businesses to cut back on workers. So are there really a lot of people having to change their consumption habits due to rising inflation? While a 6.8% jump in inflation is a lot, much of the year-over-year jump is driven by a big recovery in gasoline prices from the depths of the COVID World in 2020 - up 58% over the last 12 months and up 6.1% in November alone. But that rise in gas prices has stopped and reversed a bit in December, down by 2.6% from a month ago, according to AAA. So that should at least limit December's increase in the CPI. Meats are another big driver of high inflation, up 16% year-over-year, and it is undoubtably is hurting both consumers and the food service industry. So should we count on that continuing? Not really, given what the futures markets are telling us. Cattle traders are saying prices won't change much at all over the next 8 months.

Pork prices are slated to jump next Summer, but then go back down to December 2021 levels this time next year. 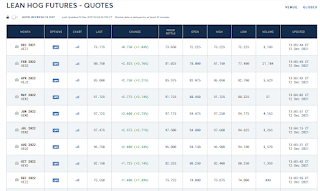 So let's check back in 6 months and see if meats are still on that 16% price increase track, or if that also settles down into something that is at least manageable. One thing should not buy into is the GOPs/media's complaints about how it's "government spending and debt" that's driving this inflation. In fact, we got news this week that the budget deficit is lower now than it was at the end of the Trump Administration.

The U.S. budget deficit totaled $356.4 billion in the first two months of the budget year, down 17% from the same period a year ago as a sharp jump in government revenues offset a smaller increase in spending. https://t.co/N72oIQO0L5

Outlays for certain refundable tax credits rose to $49 billion (more than four times the amount spent in the first two months of fiscal year 2021)—an increase of $38 billion. Advance payments for the American Rescue Plan Act’s child tax credit accounted for about 60 percent of that increase.

In addition, the US dollar is stronger now than it was when the Biden stimulus package was passed in March, and the 10-year Treasury note is still fetching less than 1.5%. The markets are clearly unconcerned with US debt, other than having conditions seem Bubbly, so we're in a much different situation than we saw with the 1970s-early '80s inflation. So let's be real here - much of the inflation we've seen over the last year is for the "good reason" - higher demand that comes with higher incomes, which are due to both government assistance and higher wages. In an economy that has 70% of it based on consumer spending, this is a healthy thing. What we do need to do is to make sure companies aren't performing non-competitive measures such as holding back supply in order to maximize profits. This can be done both through strong anti-trust enforcement by the Biden Administration, and higher corporate taxes that make profiteering a less-valuable possibility. In addition, we also should be encouraging more production and supplies to come from the US, which would leave us less susceptible to COVID-related disruptions in other countries. But I also think much of this inflation worry is corporate and GOP propaganda. It's not something holding back much of the economy, it's not holdiing back hiring or causing layoffs, and it's not driving down our dollar or raising our interest rates. In fact, I'd argue much of this inflation would dissipate if we did something to tamp down the corporate greed that is at Bubbly, record levels in this country, and take steps to encourage more competition and alternatives to what exists today. Bottom line to me - I'd much rather have 6.8% inflation, higher wages and 4.2% unemployment than 6.8% unemployment, stagnant wages, and low inflation. Don't you agree?
Posted by Jake formerly of the LP at 3:08:00 PM