WMC says they want more talent, but have no clue how to get it

Oh, look it’s Wisconsin’s “business leaders” with another plan to boost this state’s economy. Let’s see what these mediocrities big thinkers are up to.

The report, titled “Wisconsin 2035” was prepared by WMC Foundation, an affiliate of Wisconsin Manufacturers and Commerce, the state’s largest business lobbying group that has primarily supported Republicans, and will be presented during WMC Foundation’s Future Wisconsin Summit in Madison on Thursday. As part of the report, officials interviewed more than 80 leaders in industries such as manufacturing, construction, retail and hospitality as well as officials in government, health care and education. “Everything comes back to workforce,” WMC president and CEO Kurt Bauer said in a statement. “Wisconsin must attract, retain and expand our talent pool. The state can no longer afford to be the best kept secret in the Midwest. We must tell our story and, at the same time, make Wisconsin an even more attractive place to live, work and play.”

Not a bad idea at all to try to get people to come here. Especially given our cold weather and unfavorable demographics. So what does WMC have in mind?

To address the need for more workers, WMC suggests increased efforts in talent attraction through foreign immigration, such as eliminating the 65,000 cap on temporary employment visas, and boosted efforts to draw more people from other states. One measure that could help on that front is an item in the state’s 2021-23 budget that directs the Wisconsin Economic Development Corp. to spend $3 million on talent attraction and retention initiatives.

It’s a good start, although is advertising “more immigrants” something you want to bring up, given that you overwhelming support Republicans who want to stir up rubes with thinly-veiled racism/xenophobia? Eh, maybe they’ll look past it. Republicans are good at that kind of two-stepping. What else does WMC think will solve these demographic issues?

WMC also points to tax cuts as another way to draw more talent to the state. One suggestion includes potentially reducing, flattening or even eliminating the state’s top individual income tax bracket, which is at 7.65% for incomes higher than about $263,000…. WMC also suggests targeting alumni from the University of Wisconsin System, members of the military nearing the end of their service and young employees looking to leave high-cost, high-tax states like neighboring Illinois. For those in Wisconsin schools, WMC notes that working to better connect K-12 systems with local employers could help recent graduates find work and stay in the state.

Oh, so attracting rich FIBs to go across the border is your magic pill? How are you going to do that when the WMC crowd wants to pay as little as possible to basically everyone that’s not an oligarch, while Wisconsin continues to have the lowest manufacturing wages in the Midwest ($5/hour below both Illinois and Minnesota). It’s especially cute that WMC talks about trying to attract “young employees” and UW alums, when they support Republicans who continue to pass backwards/racist legislation as a strategy. Stuff that makes people from outside Wisconsin say “That state’s screwed up, why would I want to live there?”

WMC - “Our employers are having problems finding workers.”

How about raising wages or child care supports or anything to make work more worthwhile?

In fact, it's telling that the only place in the state that gets large amounts of talent to move here is liberal, high-services Madison – a city that the WisGOP/WMC crowd constantly complains about. Since WMC is concerned over a lack of population compare Wisconsin's population growth with a couple of other mid-sized cold-weather states who took a different path in the 2010s - electing Dems as Governor, protecting natural resources, maintaining public education, paying higher wages to workers, and encouraging a higher quality of life. How did they do? 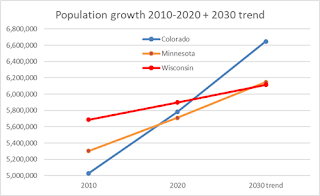 Maybe WMC could learn something from that, before Colorado and Minnesota pass us for population in this decade. Naaah, they'd rather sit on their backsides and pay politicians vs improving things for anyone other than themselves. These oligarchs/mediocre businessmen got pretty much everything they wanted in the 2010s – complete Republican control with massive giveaways to corporations and wage-suppression measures like Act 10 and right-to-work (for less). And now they complain about how Wisconsin lags behind in growth? Take a seat, WMC. Let those of us who know what actually works in the 21st Century take care of this state for a while. And I bet you’ll do better than you are today (well, except for the crooks who got WEDC handouts in the Walker years). Win-win!
Posted by Jake formerly of the LP at 8:42:00 AM