I'm on semi-vacation this week, but I wanted to give a few thoughts and relay a few tweets about the big economic agenda discussion happening in DC. Let's start with Sunday's dick move that infuriated any decent Democrat/American that wants to see childhood poverty get cut, have Americans get access to needed supports and not have people go broke when they have to pay for insulin and other medications.

“I can’t move forward. I cannot vote to continue with this piece of legislation, I just can’t,” Manchin said on Fox News Sunday, citing the impacts of rising prices, the arrival of a new coronavirus variant and other domestic and international challenges.https://t.co/6MFbuz3w7L

The decision to make this announcement on Faux News is just the chef's kiss. What a piece of crap. This BS about "the debt and inflation" again? First of all, Build Back Better limits inflation through provisions such as negotiating for drug prices, offering an expansion of in-home long-term care services, and increasing alternatives to oil and gas as energy sources. It also discourages profiteering and stock buybacks through higher corporate taxes. Second, if our national debt was causing inflation, 10 years of debt wouldn't be costing less than 1.5% a year, and you wouldn't be seeing the US dollar at 17-month highs. 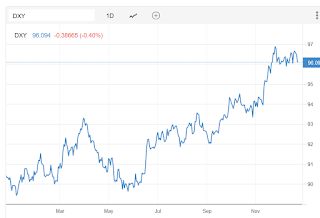 Manchin also mentioned long-term costs of these programs, but as I mentioned last week, that's largely based on a BS group of assumptions that aren't in the Build Back Better bill, and don't assume tax increases that are slated to happen in 4 years under the GOP Tax Scam (aka "current law"). The only way many of these programs would continue is if future Congresses voted to continue them...because they were too good/needed to take away. Also, if Manchin cares so much about the effect of omnicron or whatever else the pandemic throws our way in coming months, wouldn't you want to vote for a bill that expands health coverage for seniors and expands the ability for our most vulnerable to get more medical services at home instead of having to go to our already-overloaded hospitals and doctor's offices? To further Manchin's economic illiteracy, this analysis was released in the wake of Manchin's comments about not being able to vote for the current BBB plan.

Wait, you're telling me more supports and services is good for the economy? No wayyyy!!! And as certain House Dems pointed out, it's funny how Manchin has concerns about how certain types of spending affects the US debt (even if they are taxed for, like Build Back Better is), but not other things.

Where was Sen. Manchin’s concern about “staggering debt” when he voted for a $768 billion defense bill last week?

And that's $768 billion for 1 YEAR. Or about 4 times more (on a 10-year basis) than the cost of Build Back Better. While the bad economic takes from Manchin are eye-rolling enough, the real reason Senator Houseboat Maserati opposed the bill was leaked out soon enough (undoubtably from Dems who have had it with this douche).

"Manchin has also told colleagues he believes that Americans would fraudulently use the proposed paid sick leave policy, specifically saying people would feign being sick and go on hunting trips, a source familiar with his comments told HuffPost."

And if that's Manchin's real concern, there's an easy solution for that.

Welfare fraud is ~3-4%, so if Manchin really thought parents were spending the Child Tax Credit on drugs, he shoulda demanded funding for addiction treatment—not punish the other 97% of parents

Manchin deserves a lot of public heat because of the absurdities he's said and the forums he's chosen to say them in (constantly addressing DC media and Faux News). But let's also note that not ONE Republican is willing to help give stability to the tens of millions of vulnerable Americans that would be helped by Build Back Better, and not ONE Republican is willing to make a move to protect our planet and property owners from the effects of increasingly severe weather and a changing climate. Naturally, it takes the one guy that DNC hacks complain is "not a Dem" to lay out this reality in a way that is the most effective in making voters recognize who the real failures and enemies are.

You can disagree. You can fight for your ideas. But when we have zero support from Republicans, two Democrats cannot torpedo a bill supported overwhelmingly by the American people. I do not respect that kind of arrogance. pic.twitter.com/gj9q3NYnUI

Two final thoughts. 1. Just put the damn bill on the floor, and allow Manchin to put up amendments that change the bill to what he wants to see happen. Put up or shut up, and let's see if it sinks or swims. And let's see if Manchin truly has a clue and wants to work with the popularly-elected president to improve things for Maericans, or if he is just babbling like a bought-off, mediocre hack will do. 2. We wouldn't have to slam things together into one big bill if it wasn't for a GD FILIBUSTER THAT ALLOWS SENATORS WHO "REPRESENT" 20% OF THE US POPULATION TO BLOCK ALL OTHER BILLS, and we only needed a majority of votes to have any bill pass this already-gerrymandered, outdated "institution".
Posted by Jake formerly of the LP at 1:59:00 PM