Population growth flatlines in US, Wisconsin in 2021

Cleaning up from the Holidays, and I wanted to talk about a stunning decline in population growth in the country in 2021, as the US Census Bureau said we added less than 400,000 people in the United States.

That’s because the coronavirus curtailed immigration, delayed pregnancies and killed hundreds of thousands of U.S. residents. Figures released Tuesday by the U.S. Census Bureau show the U.S. grew by only 0.1%. #Fox47Madison https://t.co/YIij3Yz4IS

The large increase in deaths in COVID-19 and other sources certainly played a role. And we found out in a USA Today report from this week that some parts of the country likely had a lot more deaths from the coronavirus than they previously let on.

Nationwide, nearly 1 million more people have died in 2020 and 2021 than in normal, pre-pandemic years, but about 800,000 deaths have been officially attributed to COVID-19, according to the CDC data. A majority of those additional 195,000 deaths are unidentified COVID-19 cases, public health experts have long suggested, pointing to the unusual increase in deaths from natural causes. An investigation by Documenting COVID-19, the USA TODAY Network and experts reveals why so many deaths have gone uncounted: After overwhelming the nation’s health care system, the coronavirus evaded its antiquated, decentralized system of investigating and recording deaths. Short-staffed, undertrained and overworked coroners and medical examiners took families at their word when they called to report the death of a relative at home. Coroners and medical examiners didn’t review medical histories or order tests to look for COVID-19. They and some physicians attributed deaths to inaccurate and nonspecific causes that are meaningless to pathologists. In some cases, stringent rules for attributing a death to COVID-19 created obstacles for relatives of the deceased and contradicted CDC guidance. These trends are clear in small cities and rural areas with less access to health care and fewer physicians. They’re especially pronounced in rural areas of the South and Western USA, areas that heavily voted for Donald Trump in the 2020 presidential election.

The record amount of death in the country led to the remarkable finding in the Census Bureau's report that deaths nearly matched births in the country as a whole, with 1/2 of states having more death than birth, and immigration added more people to America than that "natural increase".

Between July 1, 2020, and July 1, 2021, the nation’s growth was due to natural increase (148,043), which is the number of excess births over deaths, and net international migration (244,622). This is the first time that net international migration (the difference between the number of people moving into the country and out of the country) has exceeded natural increase for a given year.... Twenty-five states experienced natural decrease in 2021, where there were more deaths than births. This was attributed to further decreases in fertility combined with increased mortality. Florida had the highest natural decrease at -45,248, followed by Pennsylvania (-30,878) and Ohio (-15,811).

But Florida gained nearly 260,000 people last year from people moving in, both within the US and internationally. And the changes in population at the state level led some to try to play some kind of "red state superiority" theme, as California, New York and Illinois had the largest losses of people, and rural and Southern states had the largest gains.

Locally, Wisconsin also had near-zero population growth, with an estimated increase of only 3,585 from July 1, 2020 to July 1, 2021, and with deaths (62,985) outpacing births (60,404). But our state benefitted from international immigration and in gaining residents from other states. 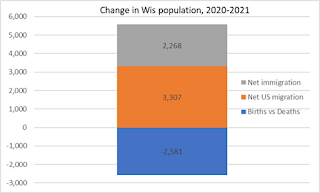 And while our increase in population was tepid, it's actually better than most other Midwestern states. 3 out of the 7 states in our region lost population in 2021 (with Illinois losing the 3rd most people out of any state in America), and Wisconsin added more people than Minnesota for the first time in several years. Now some might say this gives proof behind the WMC/WisGOP strategy of "poach rich FIBs to move here and grow Wisconsin's economy" (which I ridiculued earlier this month), but we still need people of working age to be part of a labor pool that those rich FIBs can take advantage of, and who's going to want to do that in a place where schools are unfunded and wages suck? Plus, the evidence from the 2020 Census is that people were moving TO Chicago for work and life, and it was the rest of the state that was losing. Obviously 2020-2021 was an extraordinmary time in America, with work and everyday life disrupted, and ended far too often. We will find out if the drastic changes and near-zero population growth is a one-time oddity of the COVID era, or if it's going to be the start of a realignment in where people live and work. And how those changes manifest themselves in the 2022 elections as well as the econmomic growth possibilities for these places.
Posted by Jake formerly of the LP at 9:30:00 AM