Like much of America, Wisconsin is seeing our level of new cases rise as 2021 ends. While Friday’s figures had a bit of settling back down, the Wisconsin Department of Health Services says we are still well above September’s peak, and have had a 7-day average over 3,000 cases since the start of December. 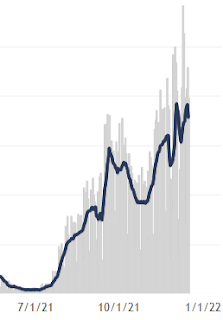 We now have a majority of Wisconsin counties with rates of new cases at the “critically high” level of 1 in 100 residents per 2 weeks, and we are nearly at that point statewide (0.996 per 100). 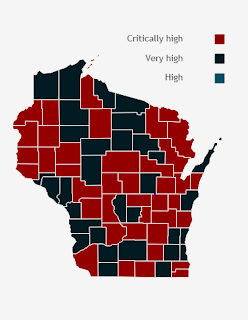 The bigger problem is that hospitals in the state are overwhelmed, as the large amount of COVID patients adds to a typical amount of people that need hospital services for "regular" reasons. A great, in-depth feature from Davids Wahlberg in Friday's Wisconsin State Journal illstrated how this is causing major strain in some of the smallest (and least vaxxed) communities.

Rural Wisconsin hospitals 'burning on the inside' with #COVID19 surge https://t.co/5KEj5bWx5t via @WiStateJournal

Leaders at Aspirus Medford Hospital gathered this week to assess their situation: 19 patients, double the regular load. Twelve with COVID-19, 11 of them unvaccinated. Three on ventilators, with another likely needing ventilation soon. The small facility in north-central Wisconsin normally would send ventilated patients to the larger Aspirus Wausau Hospital nearly 50 miles away, but its critical care beds were full. In Medford, four emergency room patients were waiting for hospital beds. To open more beds, the hospital needs more nurses. They’re in short supply..... In Medford, a city of 4,300 people where many jobs involve making windows, cheese or frozen pizza, hospital workers feel frustration from being in the county with the state’s lowest COVID-19 vaccination rate. Just 34.5% of residents in Taylor County had received at least one dose as of Friday, compared to 61.3% statewide and 79.9% in Dane County. Amanda Keeling, a nurse who grew up in Medford and moved back after going to school in Oshkosh and working in Green Bay, said some friends and family don’t believe her when she says the steady stream of COVID-19 patients is wearing her and other nurses out. There’s little interest in discussing how more vaccination could make the situation more manageable, she said.

Need I mention that Taylor County gave more than 70% of its votes to Donald Trump in both 2016 and 2020? By contrast, even though the rate of new cases has doubled this month in very blue, heavily-vaxxed Dane County have doubled this month, that county also has the lowest death rate in the state and has had few fatalities in this September-December resurgence while the rest of the state is seeing more than 20 deaths a day. The difference in outcomes was reiterated Wednesday, where the Wisconsin Department of Health Services released their monthly look at “vaxxed vs non-vaxxed” cases for November. While the gap in case rates between vaxxed and non-vaxxed has narrowed a bit, it still exists, and the vaccinated are much less likely to end up in the hospital or dead.

UPDATE: After our Illness After Vaccination data was updated yesterday, the #DHSWI Surveillance team identified an error in the number of cases reported in the 0-11 age group. There were no cases of #COVID19 reported in fully vaccinated people in this age group in November 2021. pic.twitter.com/cgTl84yBK0

Dane County went a step further, and included information on the more than 180,000+ county residents that have already been boosted in its weekly data snapshot. While the time period is small, those with boosters are seeing cases rates 95% lower than those without the vaccine, and were 9 times less likely than the vaccinated-but-not-boosted to get the COVID virus in November. 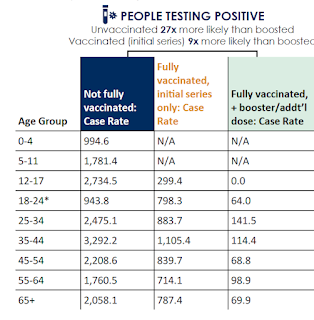 So while the looming spectre of omnicron is worrying, and the overhang might make for a second straight gloomy Holiday season, there still seems to be a major difference in outcomes between the vaccinated and unvaccinated. Getting boosted (so far) seems to be even more helpful, so if you haven’t done so, you might want any time off around the Holiday to take care of that, which will likely make for an easier start to 2022.
Posted by Jake formerly of the LP at 11:49:00 AM