As part of his continuing post-Governor grift, Scott Walker was on AM 1130 last week to front for a WisGOP Tax scheme that has the same BS themes that past WisGOP tax schemes have had.

Former Gov. @ScottWalker is talking to @JayWeber3 to tout a plan to eliminate the state’s income tax and increase the sales tax from 5% to 8%.

And guess which UW professor was tasked to do the "study" on this plan? If you've been following this page in the last few years, you already know.

New report released today from CROWE Director Noah Williams on eliminating the Wisconsin state income tax. According to the analysis, such a reform would lead to a $3.5 billion tax savings statewide, which comes out to an annual average of $1,700 per household. https://t.co/oHB8ESwDOY

Let me remind you who funds Williams and CROWE.

Professor Noah Williams is director of the Center for Research on the Wisconsin Economy, established in July. It operates out of the Social Sciences Building, 1180 Observatory Dr. Funding for the center includes $240,000 from the Charles Koch Foundation and $100,000 from the Bradley Foundation, according to a proposal for the center approved in March by the UW-Madison College of Letters and Science’s Academic Planning Council.... The mission of CROWE is to “provide objective economic research to support economic development and policy evaluation for important state-level issues,” according to the proposal. The center will “provide a crucial link in tying the UW to the broader policy and business community statewide, expanding the outreach from academic research to practical application,” the proposal said.

"Objective economic research". Funded by the Kochs and the Bradleys, while using the UW-Madison name to cover up for their GOPperganda. Just gross. You can read Williams' entire Koched-up report here, especially if you want the comedy and-or eye-rolling exercise. There actually is some good Wisconsin tax history in there, and Williams splits up the analysis between a 1-year "all-in" plan that changes the income tax to 0% and sales tax to 8% in 2023, and an 8-year "phase-in" plan that makes reductions every 2 years until we get down to 0% by 2030. Let's go into the magic that Williams says would happen if Wisconsin's income tax went away. The main crux is explained through this chart, where Williams tries to figure out what the state's 5% sales tax rate should be raised to in order to get to some kind of "sweet spot" that makes up some of the lost tax revenue, but also improves the state's economy.

The table shows that, regardless of the level of sales tax implemented, all of the proposed reforms lead to notable gains in output, employment, and after-tax incomes. That is, moving the state government tax system from an income base to a consumption base promotes relatively substantial economic gains. I take an 8% sales tax rate as my baseline policy proposal. As the table shows, this would result in an average tax cut of $1,705 per household, which means a static tax revenue reduction of 26.8%. However increased economic activity makes up more than half of the lost revenue, with the reform leading to 12.5% lower tax collections in the long run. The economic implications of the reform are strong, leading to a 7.9% increase in output and 6.9% increase in employment. Even though the sales tax rate increases by 60%, consumption grows 7.2% and after-tax incomes increase by 9.4%.

So why would there be a nearly 7% increase in jobs solely due to 0% income tax? Williams tries to answer this question by claiming businesses will hire more and more people will come here.

Undoubtedly, the model implies strong employment effects of the tax reform. Under the baseline forecast, employment would revert to its slow average growth of 0.1% per year, driven by the slow growth of the labor force in the state. The model predicts a strong employment surge in the first two years in response to the all-in plan, with an increase of about 160,000 jobs over that span, then continued but slower growth after that. As above, this initial surge would be tempered somewhat with labor adjustment costs (better known as "people getting paid more") , but the overall trend would be similar. Under the phase-in plan, the model predicts that employment would largely continue on its pre-pandemic growth trend. While these effects are large, recall that the average marginal tax rate on labor income is 5.8%, which would drop to zero under the reform. Thus, while the labor supply effects are large in magnitude, they come in response to a large change in take-home pay. Fundamental tax reform in Wisconsin has the promise of increasing labor market participation among state residents, as well as increasing the population and labor force by drawing new workers from out of state. See Kleven et al. (2020) and Moretti and Wilson (2017), for recent evidence on the strong impact of state taxes on migration.

In others words, Williams is saying "Just trust me, it'll happen", without mentioning that Wisconsin employers would have to stop underpaying workers compared to our Midwestern neighbors/rivals, or without the state investing in any type of quality of life measures that would be needed to convince people to move to a state that has below-freezing temperatures for 4-5 months out of the year. (Then again, if the Kochs get their way, maybe the planet will be heated up enough that our climate is more like current-day St. Louis instead of Minneapolis so....winning)? What evidence is there that there would be some huge influx of new workers to fill this alleged increase in demand? We saw nothing like that throughout the tax-cutting Age of Fitzwalkerstan in the 2010s (our population growth was the slowest in decades), and as 2021 ends, we have an unemployment rate of 3.0% with a workforce participation rate of 66.4% vs a US rate of 61.8%. And what person with talent would want to move to and/or raise a family in a state filled with backwards-ass legislators that hate public education, equal rights, and science? That would no doubt be what you'd get with a Legislature that would pass such a "reform", given who makes up WisGOP today. Leaving aside the reality that the Wisconsin workforce won't grow like Williams claims it will, how are we going to maintain a balanced budget with such a large reduction in revenues? Williams says "Well, we have a surplus, may as well blow it!", and includes this chart which compares current-day tax revenues (in black) with the 8-year phase in (in red) and the "all-in" change in 2023 (in blue). 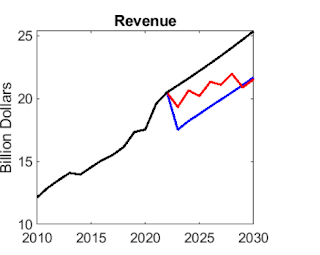 The figure also helps put the magnitude of the tax revenue cuts in context. Under the all-in plan, state tax revenue in 2023 would fall by about $3 billion in absolute terms from 2022 and about $3.5 billion relative to what it would be in 2023 under current policy. But that simply returns state tax revenue in 2023 to almost the same level it was in 2020, before the huge increase in 2021. After that initial cut in 2023, tax revenue continues to increase. The phase-in plan leads to a smaller cut in 2023, of about $1.2 billion from 2022 or about $1.7 billion relative to what it would be under current policy. After that initial cut, tax revenue under the plan would generally trend upward, with an additional $1.1 billion dip in 2029 (or $1.7 billion additional cut relative to the baseline).

But the lack of revenues serves a second purpose, to cause a "Starving the Beast" scenario where Republicans can induce a budget deficit and the need to cut funding for needs such as public education and medical care. Naturally, Williams doesn't give any mention about what might get cut or how the lack of that stabilization and investment would limit economic activity and increase personal hardship. One other item that isn’t mentioned is whether local governments are allowed to have the freedom to raise their own sales taxes. Because you know that the lack of revenue at the state level is going to be “paid off” by cutting revenues to local governments, so there better be a way for it to be made up. (HAHAHAH, I kid, we know WisGOP would screw them over like they did in the 2010s). Tamarine Cornelius at the Wisconsin Budget Project mentioned that Scott Walker floated this stupidity before – 8 years ago, and the same problems are in play. Wisconsin already has a heavily-regressive tax system, and this )% income tax plan would make this much worse.

Because of these tax characteristics, increasing the sales tax while cutting the income tax usually results in a tax shift to people with lower incomes. Once it became clear how radically this would change the balance of who pays taxes, Gov Walker did not push this proposal.

It's right in front of you, Governor Evers. "The Republicans will throw us back into budget deficits and raise taxes on the poor while cutting taxes even more for the rich." They've shown their hand with this Koched-up Bradley Bullshit proposal, and it should be tied around their necks.
Posted by Jake formerly of the LP at 4:35:00 PM