Despite the fact that it would drastically reduce taxes on the rich and raise them on most of the rest of us, Wisconsin Republicans are still trying to come up with ways to cut our state’s income tax to 0%. Here’s how the latest scheme would work, as part of a bill sponsored by State Sen. Roger Roth.

And then apparently the tax rates keep going down and down each time revenues exceed the (reduced) projections, which reduces the amount of money coming in (sorry Laffer, that is how it works out in the real world). Makes it hard to spend the money if you never have it, right? This bill was signaled when the Koched-up CROWE group at UW-Madison released a report a couple of months ago featuring typically sketchy models promising ridiculous economic growth if income taxes were cut to 0% in Wisconsin. (I went over that “study” in this post here). The Wisconsin Budget Project notes that this scheme would be very regressive, in a state that already has the richest Wisconsinites paying the lowest % of income in total [state and local] taxes. 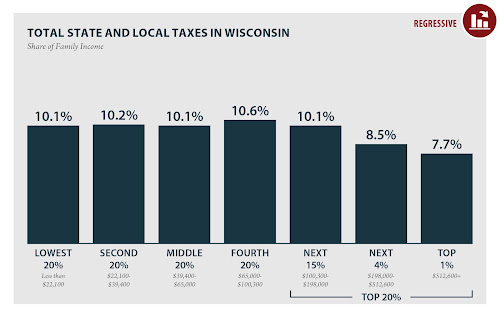 In addition, the budget project notes that this type of tax shift also would give even more advantages to white Wisconsinites in a state that already has massive racial disparities in income. 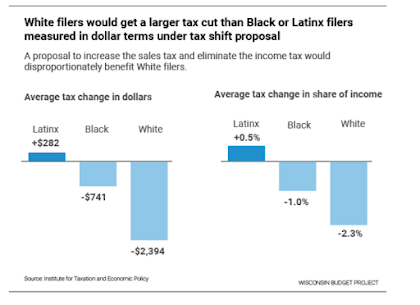 Wisconsin’s tax code is a major driver of economic and racial inequality, and contributes to the increasing concentration of income and wealth in a few hands—hands that are most likely to be White, due to a long history of racial discrimination. By targeting the bulk of a mammoth tax cut to white households, this proposal would make it harder for families of color to thrive.

The Budget Project also deals with a reality that Sen. Roth and CROWE won't - describing the scale of budget cuts that would eventually happen with this 0% income tax scheme.

This change would result in a massive revenue loss that would make it much more difficult for Wisconsin to make investments in families, schools, communities, and public infrastructure. The state would lose an estimated $5.3 billion in tax revenue a year, forcing the harmful elimination of entire categories of services that make Wisconsin an attractive place to live, work, and do business. To put the tax cut in perspective, it would require budget cuts equivalent to ending the state support for BadgerCare, the program that provides health care for people with low incomes; closing every prison in the state; and ending state support for Wisconsin’s technical college system, all combined.

The CROWE scheme counted on an increase in the state sales tax to 8% to make up some of the difference, and as longtime Capitol reporter Steven Walters reports, State Sen. Jon Erpenbach asked the Legislative Fiscal Bureau to crunch the numbers and see what would happen, and the LFB said that boosting the sales tax by 3% would have a notable cost to both Wisconsin consumers and businesses.

-Individuals pay an estimated 67% of the sales tax, and businesses 33%. So, an 8% state sales tax could cost consumers $2.7 billion more and businesses $1.4 billion more. -An 8% sales tax would make Wisconsin’s sales tax the highest in the nation. It could also invite residents along the state’s borders to make major purchases in other states.

In addition, more than ¼ of Wisconsinites don’t owe any income tax under our current tax system, so they would get virtually no benefit from a 0% income tax, while paying 3% more on anything that has sales tax associated with it. But there’s a catch, because of a previous restriction against raising taxes that WisGOPs put into law. So Roth’s bill doesn’t even allow for the state to make up the loss of $

(LFB)….says state law requires a two-thirds vote of the Legislature, or passage of a statewide referendum, to raise the 5% state sales tax. Because neither of those will happen, Roth’s bill would only phase out the income tax, if future tax collections exceed estimates. “When the economy was doing well, when money was coming into the state, we would take that and have more or less automatic tax cuts going back to the people until that income tax is eliminated,” Roth said.

And just like in CROWE's scheme, Roth’s bill has no plan for helping state and local governments make up the difference for the lack of funds that would result from a 0% income tax situation. Which likely means that property taxes and/or fees would have to be raised to make up the difference, along with crippling service cuts. And Republicans are still trying to claim we can’t afford to follow Gov Evers’ plan for a one-time tax rebate of $150 per Wisconsinite because all of our $3.8 billion cushion might not be there in 16 months? Having a permanent drop and/or elimination of tax rates is much more costlier and fiscally risky over the long term over sending back of ¼ of our current projected surplus. But of course, then Tony Evers would be given credit for doing something that people want, and that is something Republicans want to avoid at all costs. So instead we are likely to have these Koched-up fever dreams put out there as GOP campaign gimmicks for the next 8 ½ months instead of any bills that might actually help Wisconsinites today.
Posted by Jake formerly of the LP at 5:21:00 PM