While the Biden Boom seemed to be continuing in January, there is definitely a warning sign that spending for many consumers may be facing a serious headwind. And it is not inflation.

The number of children in America living in poverty jumped dramatically after just one month without the expanded child tax credit payments, according to a new study. Advocates fear the lapse in payments could unravel achievements in poverty reduction.https://t.co/zQLnznUp8G

New data says child poverty in the US saw a 41% increase from December to January. This is a direct result of getting rid of the child tax credit. If there's anything worth blocking bridges and interrupting the flow of capital, it's hungry children. pic.twitter.com/NR62tuAVuX

We already saw this appear in January's US income report, as the amount of Child Tax Credit payments to Americans went down more than 53%. 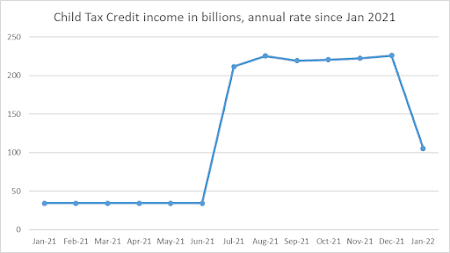 In addition, the Child Tax Credit payments of 2021 will likely reduce the amount of tax refunds that many parents will get in the coming months, because they got those refunds up front every month instead of getting it in one lump sum the next Spring after they file. There may be no net change in money that individuals get, but that's not much solace to people that are counting on a certain level of income being sent to them. It's been an interesting policy experiment, and perhaps getting those Child Tax Credit funds up front is a more efficient way to contiunue consumer spending and help families pay their bills. And we've also seen other types of COVID-era stimulus fade out in recent months, as the economy has recovered and stimulus checks and other payments have gone away. Fortunately, wages and salaries and business incomes have picked up the difference, and are now well above their pre-COVID levels. 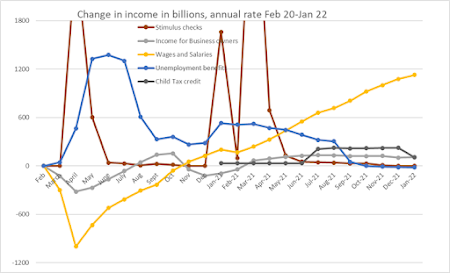 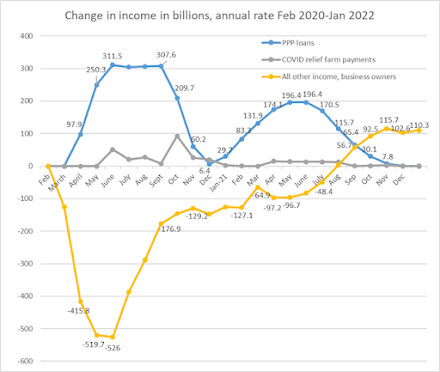 But the changes in where people are spending their money is continuing, and as Omicron broke out in January, we saw consumer spending shift again back into goods over services, with spending in the food services/accomodations sector dipping back below the pre-COVID peak. 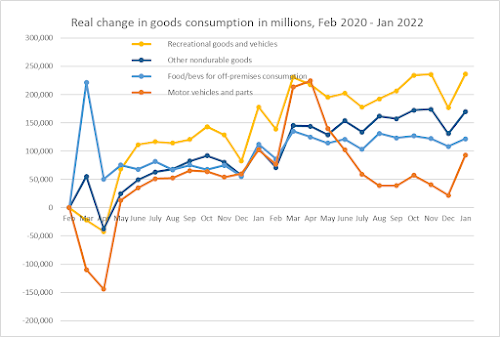 Some of this may be a seasonal adjustment thing, which deflates December spending totals and inflates January spending totals and exaggerates what may be negligible changes in the post-COVID World. And with Omicron fading, perhaps this bounces back in February and March. But it also shows that another outbreak or other economic disruption can cause real changes in the economy that would likely result in distress for a large swath of Americans. Perhaps we need to return to sending Child Tax Credit checks and other support directly to people, instead of forcing people to wait for tax season or fill out onerous forms. If I were President Biden, I would direct the US Treasury to resume the payments based on the current Child Tax Credit amount (would be $183/month per child 16 and under), and then adjust it later based on whatever the final legislation might be. In addition, the upcoming Federal budget negotiations may be a good time to re-subsidize restaurants and other industries that still have yet to recover from the pandemic. Because the recent income and spending data shows that while the overall economy was stil humming along as 2022 began, to pull away all support for families and the travel and food services sector could be a recipe for the Biden Boom of 2021 to hit a wall in 2022. So let's not do that, even if it raises prices by a couple more % than we are otherwise used to.
Posted by Jake formerly of the LP at 1:04:00 PM