After the 0.1% Miller Park/AmFam Field tax was finally retired in early 2020, you kind of knew it was a matter of time before the Brewers might be hinting at a need for more public help. AND NOW IT BEGINS, with Tom Daykin of the Milwaukee Journal-Sentinel giving a good, in-depth rundown earlier this week. While the Southeast Wisconsin Baseball Park District has enough funding to pay for upgraded seats, better elevators/escalators and ongoing fixes to AmFam Field’s roof over the next 3 years, there’s more that is going to be needed after that, and the District claims it won't have enough funding to pay for those future needs.

Rick Schlesinger, Brewers president of business operations, told the board at its Jan. 31 meeting of his concerns of a possible funding shortfall if estimated long-term improvement costs exceed the stadium district's $87 million reserve fund. A shortfall would create a problem for the district. Its lease to the Brewers, which runs through at least 2030 and could be extended by the club to 2040, requires the agency to pay for improvements — including those needed to keep American Family Field up to the evolving standards of other Major League Baseball stadiums. 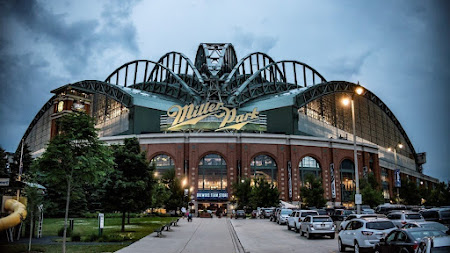 No matter what you call it, more might be coming. Daykin also noted that the Stadium District pays for almost all of those upgrades, and according to the way the agreement is set up, the ballpark has to fixed up to a high level.

"[I]mprovements must be made in a manner consistent with MLB stadiums which "can reasonably be said to fall within the 'top' twenty-five percent (25%) of all such facilities, when such facilities are ranked or rated according to the quality with which they are repaired and improved," according to the lease. Call it the "keeping up with the Joneses" clause. The district in the 2005-'06 off-season added a ribbon scoreboard and an out-of-town scoreboard at the cost of $3.1 million. Those boards were updated in the 2019-'20 off-season — costing $2.1 million, according to the district. Also, LED stadium lights were installed in the 2020-'21 off-season for $2 million. That was another improvement triggered by the "keeping up with the Joneses" clause.

The district (and not the Brewers) are the ones paying for most of those upgrades, and now that the Miller Park sales tax is gone, a lot of their funding doesn't exist. So is it time for the team to step up and pay more of their share? In the 2020s, the Crew has sure been doing a lot better than in 2001, when the ballpark opened. 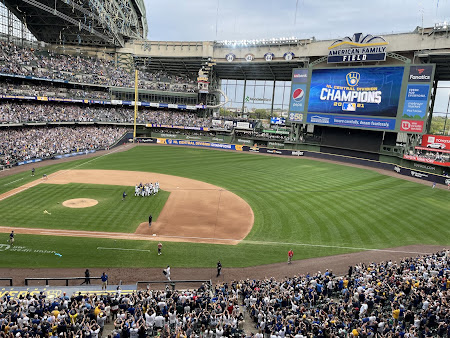 . It's worth noting that last year, Forbes estimated the value of the Brewers' franchise at $1.22 billion, nearly $1 billion more than the $223 million that Mark Attanasio's group bought it for in 2005. And concessions certainly aren't at 2005 prices ($10.50 for a can of Spotted Cow??), neither are ticket prices nor parking, nor TV/radio revenues. All of that money goes into the Brewers' pockets, and the team only is slated to contribute $1.5 million to the Stadium District in 2022, while the District pays out for many of the improvements. In addition, Bruce Murphy at Urban Milwaukee has mentioned several times that as part of their lease agreement, the Brewers don't pay property taxes for the hundreds of billions of dollars of land and ballpark that they get to use (this article is an especially good breakdown). And beyond payments to Milwaukee Police to have their cops help out Brewers' employees for gameday security and traffic control, I'm not sure what else the team pays to the City that they play in. Speaking of Bruce Murphy, he responded to Daykin's story in Urban Milwaukee yesterday. Murphy questions why there would be any kind of urgency for the team and/or Stadium District to need more money for investment into the ballpark.

Meanwhile the Brewers were still sitting on a huge pile of money from the taxpayers, because that $605 million in [Miller Park] sales taxes included a buildup of enough reserve funds to continue subsidizing the stadium until 2040, as Urban Milwaukee reported, far beyond the 30-year period repeatedly noted in a 1999 report by the nonpartisan Legislative Audit Bureau. The reserve funds included $42 million to help pay for the stadium’s annual maintenance costs and $52 million for any expenses that may arise for capital costs. Press reports indicate that $94 million fund is now down to $87 million. Tyler Barnes, the team’s senior vice president of communications and affiliate operations, said that since the stadium opened in 2001, the Brewers have paid $20.9 million in rent to the district, $112.7 million in capital improvements at the ballpark and $95 million in maintenance and cleaning. Which confirms that most of the costs have been borne by the taxpayers. Though it might help to have an independent analysis of this by the [Legislative] [A]udit [B]ureau.

Barnes’ comment of “the Brewers have paid ____ in rent and capital improvements” is especially unimpressive when you realize he’s referring to the total cost over 21 years. $1 mil a year in rent and under $6 mil in capital improvements is a whole lot less than fair market value for both rent and capital/upkeep costs on an annual basis, while the Brewers keep the overwhelming amount of revenues that come from using the land and the ballpark. Not that I'm in favor of any subsidy given how things lay out right now, but if they want to do it, then maybe it should be a way to allow Milwaukee to get some long-deserved fiscal help. For example, why not have a 1% tax that is levied on all revenues generated from events at AmFam Field? This could then be split in some way (call it 50-50?) between the team (who uses the money for capital needs) and the City (who provides services that benefit both the Brewers and their fans). In all seriousness, how can it be justified for the state and county get a cut of the Brewers' revenue (via sales tax), but the City basically gets no boost in tax revenue outside of the contract with Milwaukee Poloice and possibly a few more room taxes from tourists. Aside from a sales tax, another option could be to follow the example of the Bucks arena, which has a $2 ticket tax, of which $1.50 goes to downtown Milwaukee's Wisconsin Center District for future development. Also, what happens if the City and the State tells the Brewers to pound sand and pay for their own upgrades if/when the Stadium District runs out of money? I suppose the team could go as far as claiming that the terms of their lease is being broken in not allowing the ballpark to be "kept up with the Joneses", and could use that as an excuse to try to leave town in 10 years or so. But do we really see that happening? That type of brinksmanship is well down the road. But watch out for the talk to begin about how to "keep the Brewers competitive" by finding some kind of new subsidy or some other kind of assistance to keep the Crew from having to pay more into the ballpark that they and so many Brewer fans benefit from. You know it's coming.
Posted by Jake formerly of the LP at 7:16:00 PM