WisGOPs fail miserably in trying to "solve" the non-problem of Wisconsinites staying on unemployment.

With the state’s unemployment rate at a record low and wages going up in order to fill positions, Wisconsin Republicans reacted to this situation by…. trying to punish the few people left on unemployment?

Republicans argued AB 938 would work to improve what they called mismanagement of unemployment benefits. Rep. Warren Petryk, R-Town of Washington, said the bill would increase the ability of DWD to audit unemployment claims to levels seen before Gov. Tony Evers took office. “This bill will help a legislator get to the bottom of the scope of how much exactly unemployment fraud has occurred under this governor’s watch and what he did or what he did not do to address this important issue,” he said…. The Assembly voted 58-34 along party lines to approve AB 935, which would reinstate time limits and implement work requirements for the FoodShare program. Under the bill, DHS would be required to enforce and implement the program’s employment and training program requirement and drug screening, testing and treatment requirements.

In addition to the general cruelty and the fact that WisGOP is giving state government ZERO dollars to take these extra steps against alleged fraud, the Wisconsin Budget Project says that these bills would reverse the progress that has been made in helping low-income families survive in recent years.

A number of Republican legislators are trying to hurriedly pass a package of bills that would weaken the sources of public assistance that have been so critical over the past two years in reducing the pandemic’s harm to workers, families and the economy.https://t.co/FyHZjoohDp

The Budget Project also says that these bills wouldn’t solve the alleged problem of Wisconsinites not wanting to take jobs, because it doesn’t deal with the real barriers that exist.

It’s very difficult to believe that these proposals constitute a good faith effort to address the worker shortage because the authors of these bills have shown little interest in policy measures that would significantly boost the number of workers. If they truly want to accomplish that goal, they should listen to workers and potential workers about the barriers to work, and they should develop a nonpartisan agenda. Based on conversations with nonprofits that work with Wisconsinites who are facing barriers to health and economic security, here is our list of recommendations for how Wisconsin can expand the workforce in ways that will help workers, their families, and the state’s economy:

Because a sharp drop in child care slots has forced many parents to drop out of the workforce, policymakers need to increase access to child care by substantially boosting funding for the child care subsidy program and creating more flexibility in the program, so it serves parents with erratic work schedules. Make adults without dependent children eligible for the state Earned Income Tax Credit (EITC), so low-wage jobs aren’t a poverty trap. Research shows that these credits do a great job of promoting work, but among the 30 states that have EITCs, only Wisconsin excludes workers who aren’t custodial parents. Stop suspending driver’s licenses for low-income people who are unable to pay fines, if those fines are unrelated to driving. Increase the minimum wage, which has been frozen at $7.25 per hour since 2009. Provide paid sick leave and family leave. This would not only help families, but would also benefit our economy by increasing worker retention and creating a more stable workforce.

Rep. Katrina Shelton, D-Green Bay, said in a media briefing the bills “highlight a doubling down on an extreme right-wing commitment to a legislative agenda that is anti-worker, anti-Wisconsin and anti-family. “They do nothing to promote rejoining the workforce and they literally rip the rug out from underneath those who are trying to make ends meet while they look for work,” Shelton said.

But that’s the whole point of these GOP "anti-welfare" bills, isn’t it? They are intended to make Wisconsinites as desperate as possible, and keep them from being able to turn down crappy jobs with crappy pay. Workers are not desperate today, as Madison writer Tom Saler pointed out in a recent Journal-Sentinel article that discussed the country’s inflation situation.

Surely, pandemic-related concerns are playing a role in the so-called Great Resignation, in which 4.3 million workers quite their jobs in December alone, leaving the labor market 2.4 million workers smaller than in February 2020. A red-hot economy in which jobs appeared abundant contributed as well, as did money saved from two massive government stimulus programs. But the pandemic also gave Americans a rare chance to step away, to slow down, to reimagine working lives to include meaning, recognition and astonishment. Or, especially among those approaching retirement, to imagine lives without work at all. And when a shrinking workforce meets an overheating economy, wage inflation inevitably shows up in consumer prices.

The Great Resignation was reiterated again in this week’s state-level JOLTS report, which showed Wisconsinites continuing to quit work at high levels at the end of 2021, while layoffs continue to be almost nonexistent. 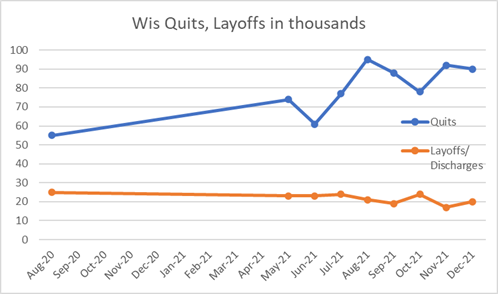 So good luck to WisGOP if they want to sell a strategy of “lazy, unemployed Wisconsinites need to be shoved back into work” in the post-pandemic era. A lot of people have seen what happens when they are given choices and supports and power over their wages, and they’re not going to accept being forced back into a spot where they are begging employers for a few crumbs in order to survive.
Posted by Jake formerly of the LP at 7:51:00 PM