Multi-decade lows in unemployment claims leading to a loss of January jobs? Doesn't add up

With tomorrow's jobs report looming and some on Wall Street expecting the first loss of jobs in the last 12 months, I think we need to take a look at what jobless claims have been doing. And if they're any indication, I think the numbers will be just fine. Take a look at this note in the jobless claims report from today. 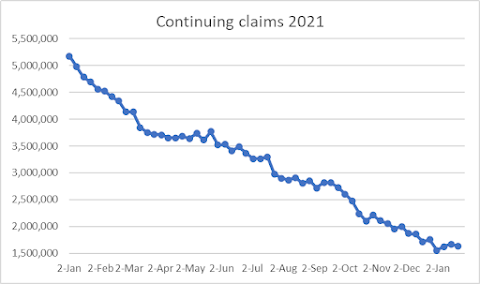 So how are we losing jobs when we have the lowest number of people filing unemployment claims in 48 1/2 years? Did hiring completely slam shut last month? I'm doubtful. Also remember that there are usually 3 million fewer people working in January than December because of seasonality, and that the jobs report takes that into account when figuring out how many jobs were "gained" or "lost" for the month. Even the ADP report of 301,000 jobs lost for January needs to be taken with a serious grain of salt. That's because ADP said there was a huge gain of jobs in December that didn't bear out in the "regular" monthly jobs report from the Bureau of Labor Statistics. Change in jobs, ADP Report
December 2021 +776,000
January 2022 -301,000
TOTAL +475,000 The ADP and BLS jobs report generally converge to similar totals over time. So if you take December's "disappointing" BLS report of 199,000 jobs, that would mean a gain of 276,000 jobs in January to equal the 2-month total in the ADP report. I'm just throwing a dart here, but the numbers we've seen wouldn't indicate that tomorrow's big jobs report won't be the brutal number that some are expecting. But it also was surveyed at the height of omicron infections 3 weeks ago, so who really knows what this number will mean as a future or even current indicator.
Posted by Jake formerly of the LP at 8:31:00 PM