Rolling Stone tells the nation about Wisconsin's Big Lie, and the danger for America

Hey, I hear Wisconsin is being given a huge spread in Rolling Stone! What’s it about?

A @RollingStone investigation shows Trump, his lawyers, right-wing religious groups, and John Eastman fueling the campaign to decertify the 2020 election & rewrite the rules for ‘22.

Awww, crap. I don’t need to be reminded about how freaky things are here, and how important these November’s elections are in these parts. Especially as WisGOPs hold a public hearing today on a number of proposed changes to elections (which fortunately will be vetoed by Governor Evers). But Kroll has written an excellent, in-depth article that brings the national spotlight back onto the nefarious plans that are afoot by WisGOPs, and how we got to this messed-up spot in our history.

For the first 150 years or so of its existence, Wisconsin earned a reputation as a laboratory of sorts, a testing ground for policies cooked up by liberals and conservatives. Think unemployment insurance and Social Security, school choice and voter-ID laws. Love them, hate them: Thank (or blame) Wisconsin. Deep political divides have always cleaved the state’s politics — this was, after all, the home of progressive icon Fighting Bob La Follette and notorious red-baiter Joe McCarthy, the land of Republican hero Tommy Thompson and LGBTQ pioneer Tammy Baldwin. And for the past two decades, Wisconsinites have grown used to statewide elections decided by razor-thin margins and a perennial battleground-state status. But if not for Florida’s hanging chads in 2000, the entire world might have converged on Wisconsin instead, where Al Gore won by 5,700 votes. Through it all, Wisconsinites saw themselves as a model for clean, open government, a kinder counterpoint to the brutal machine politics of Richard Daley’s Chicago, 90 miles to the south. For the past decade, however, Wisconsin politics have polarized in much the same way the nation has. Scott Walker’s gubernatorial election in 2010 and his subsequent “divide-and-conquer” assault on labor unions, a surgical gerrymander that has locked in GOP majorities with no end in sight, Wisconsin Republicans, including former Speaker Paul Ryan and former White House Chief of Staff Reince Priebus, steering the party through the Trump presidency — all of it has cemented Wisconsin’s place as a bastion for the Republican Party. If you want to understand where the GOP might be headed, watch Wisconsin.

Tell me about it, dude. We have been the testing ground of pretty much everything bad about politics since 2010, from disgusting levels of dark money and growing inequality, to relentless attempts to slant the playing field for the GOP through “divide and conquer” measures that try to trick everyday people into voting Republican out of resentment/fear of “others” over any legitimate policy reason. But the “divide and conquer” strategy included building a Bubble of BS through Hate Radio 1130/1310 and social media/Internet GOPperganda. And now that Bubble has turned WisGOPs into conspiracy-addled fools that refuse to deal with the reality that more Wisconsin voters chose Joe Biden over Donald Trump in November 2020. Much of the Rolling Stone article centers on State Rep. Tim Ramthum (R-Kewaskum), who has tried to decertify Wisconsin’s 2020 electoral votes (something he or no one else can do legally), claiming some kind of fraud happened in the presidential election. Rolling Stone author Kroll met with Ramthun last month, and the Washington County Rep gave his sources and “proof” of sketchiness.

Ramthun came late to the cause. He traces his journey toward the truth to a March 10, 2021, hearing of the state Assembly’s campaigns and elections committee. He listened as the witnesses, all of them selected by the Republicans who ran the committee, made accusations of illegality and fraud about the way the city of Green Bay ran its 2020 election. His mind reeled as a lawyer named Erick Kaardal, who had previously represented Kanye West’s campaign in the state, told the committee that “a private corporation” funded by Facebook chief executive Mark Zuckerberg had funneled millions of dollars into the state’s five biggest cities, which Kaardal referred to as the “Wisconsin Five.” The money had acted as bribes to those cities to get out the vote for Joe Biden, and no one had noticed it at the time. A few months later, Ramthun attended a gathering in Sioux City, Iowa, of all the major election-fraud activists, hosted by MyPillow’s Mike Lindell, and returned full of conviction that his state needed to do more to ensure integrity in the 2020 election.

Of course, Ramthun doesn’t mention that Zuckerberg’s organization gave grants to 214 communities all around Wisconsin, with the counties that had the most communities getting grants being pro-Trump Marathon and Marinette Counties. The bigger cities got more money BECAUSE THERE ARE MORE PEOPLE IN THOSE CITIES with nowhere near the same number of people per voting place as you have in the sticks. Also not mentioned by Ramthun is that the biggest increase in turnout during the 2020 election generally came from rural Trump-voting counties, despite their stagnant populations and higher COVID rates in November 2020. This translated into wider margins for Trump in most of those places vs 2016 (represented in red here). 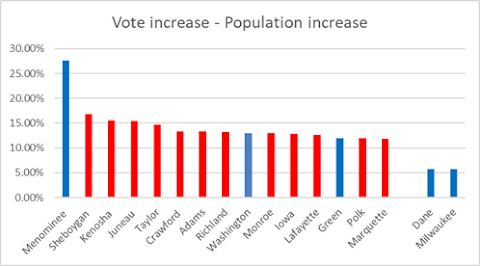 But in Ramthun world, the votes from (Dem-supporting) cities (with more People of Color) are somehow…different. It's also worth noting that Erick Kardaal, the lawyer who inspired Ramthun to "search for the truth", was referred for sanctions by a federal judge for his Big Lies, and is employed by the “non-profit” fundies at the Thomas More Society. That same Thomas More Society is currently having some of its “workers” share office space in Brookfield with fellow Big Liar Michael Gableman, and both Gableman and the Thomas More folks are collecting nice paychecks at Wisconsin taxpayer expense as they continue their interminable “work” for the same Assembly Elections Committee that Ramthun got his initial “proof” from. The Human Centipede of WisGOP BS continues with the Chair of that Assembly Elections Committee, who also is interviewed in the Rolling Stone article.

Wisconsin Republicans say they’ve heard from voters who are disgusted by the 2020 election, and plan to hold Democrats accountable. “There will be retribution down the road,” state Rep. [Janel] Brandtjen tells me in her office. There’s an icy certainty in the way she says this, and her use of the word “retribution” catches me off guard. What does she mean by that, I ask. Brandtjen stares straight at me. “There’ll be retribution for people because they don’t think there’s fair elections.” She goes on, “You see what happens to countries when they don’t think they have fair elections. Look at Venezuela. It falters the republic.”

Who is “they”, Janel? Dumb trailer trash who buy into the Big Lies that Faux News, AM Radio and your fellow GOPpergandists throw out? Or are you talking about yourself, a mediocre marketing rep from Menomonee Falls that’s drunk on power in a gerrymandered Legislature? PS- Nice “Venezuela” reference, Janel. Good to know you buy into one of the absolute stupidest conspiracy theories out there. (Hugo Chavez is long dead, Jan). The only fun part here is that Robbin' Vos thought he could use the Big Lie to stir up MAGAt rubes in the 2022 elections, but now it has gotten out of control and his own party members have turned on the Speaker.

The Wood County GOP is publicly slamming Assembly Speaker Robin Vos and demanding his “constituents begin the process of removing him from office" because, the party claims, he has not supported conspiracy theories enough.https://t.co/ScwXB4tIel

For those of us outside of Bubble World, the end of Kroll’s piece spells out the stakes. I think most of us in Wisconsin are sick of being reminded of this, but it is something worthy of the national attention he is giving it. Because like so many other things in the last 12 years, we are the test run for nationwide GOP evil.

The threat to democracy in Wisconsin isn’t coming from a lawless election commission, hacked voting machines, or illegal ballots coming out of nursing homes. It comes from a political party that united around suspicions and lies, and sought to bend reality to its will. Wisconsin is more than a laboratory for new policies and bold ideas; it’s a trial for whether democracy can survive at all.

Again, here’s the link. Read the whole thing, if you can stomach it.
Posted by Jake formerly of the LP at 4:30:00 PM