A horrendous May Wisconsin jobs report

In between the awful events in Charleston and with the budget meltdowns going on at the Wisconsin Capitol, you may not have noticed that we had a state jobs report go public in Wisconsin this afternoon. And there's a reason the Walker Administration was remarkably silent about what was in, because May's stats were horrible.

As a result, the Walker jobs gap has exploded well past 90,000 for private jobs and jobs overal, because the nation regained its economic footing in May, and added 280,000 jobs while our state was getting clobbered. 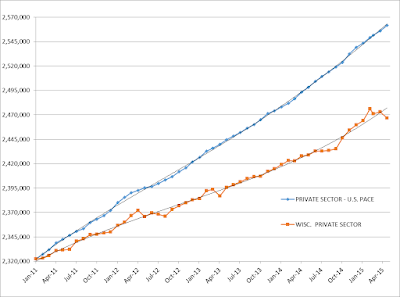 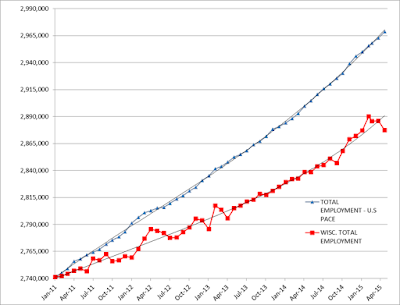 The unemployment rate in Wisconsin also spiked up from 4.4% to 4.6%, but not for the reasons I thought they might. The Wisconsin labor force fell AGAIN in May by 4,900 people, but because that survey also reported a loss of 8,800 jobs, unemployment still went up. The lower labor force repeats a trend we’ve seen in the household survey for the last four months, and making the state's unemployment rate artificially low.

So it’s only because of a huge drop in the state’s labor force (because a lot of people are leaving?) that we have that “lower unemployment” Scott Walker likes to brag about when he talks to the GOP rubes in other states. Funny, I seem to recall a lot of GOPs whining about lower participation rates to knock down the Obama recovery, conveniently not mentioning that the percentage of people employed is still the highest in 6 years. But I guess they want folks to look the other way when it happens to one of their guys.

A look further inside the May Wisconsin jobs report in Wisconsin makes things seem even worse, if that’s possible. When you add in April’s downward revisions, take a look where the job losses were.

The Construction numbers are very distressing, as it shows lower-than-normal hiring for Summer road and building work. The only place where there was sizable hiring in May was in the "Leisure and Hospitality" sector (+3,700 in May), which is bars, hotels, and similar low-paying and/or tourist-related jobs. And if the people with jobs in those other sectors don’t have money to spend in the Leisure and Hospitality sector, you can bet those jobs will dry up more than normal after this Summer.

The scarier stat is that the May jobs survey happened in the middle of the month, before students got out of college and a decent amount entered the ranks of the unemployed, before K-12 teachers and university personnel get laid off around the state with the end of the school year, and before the 700+ layoffs at Gemini Cares, or the 140 call center workers for Frontier Air Lines lost their jobs. Both of those mass layoffs were scheduled for May 31, and indeed, we’ve seen an increase in unemployment claims over the last 2-3 weeks in the state, including an increase of more than 700 last week while the country had an unadjusted drop in initial claims of 17,500.

Is it possible that this jobs report is so bad that it’ll cause a revenue shortfall when the fiscal year ends in less than 2 weeks? I’m starting to think it is, because we had no wiggle room to begin with, and the Republicans in the State Legislature have acted very uncomfortable with the state budget in recent weeks, exploding into dysfunction and accusations that major members of their own party are lying about the budget over the past week.

Given that this is likely the last jobs report that will come out before Gov Walker officially announces his run for the presidency, you have to think these brutal jobs and budget numbers will demand a lot of questions from the national media. Kind of hard to say you've done a great job and deserve a promotion when your state was last in the Midwest for job growth during your first term, and it's lost more than 12,000 jobs in the 3 months before you announce your candidacy. Those questions will demand answers well beyond the Palin-esque word salad and lame excuses that our paid-off media has allowed Scotty to throw out during his Reign of Error here in Wisconsin.
Posted by Jake formerly of the LP at 5:43:00 PM