It's been nearly 2 weeks since the Joint Finance Committee has met to confirm or adjust items in the Wisconsin state budget, and the holdup is largely due to a massive difference of opinion regarding the state's transportation budget. Gov Walker did his typical "throw a bunch of crap together and let the State Legislature hash it out" move, by including all of the highway rehab and expressway projects, but not adding any of the $751 million in taxes and fees that were part of the Wisconsin DOT's budget request. As a result, there is $1.3 billion in borrowing for this budget (ho says Scott Walker doesn't believe in deficit spending?), which will explode the Transportation Fund's debt service costs from their already-high level of $331.6 million this fiscal year to $408.3 million in 2 years.

The Legislative GOP has balked at all of the borrowing, and as a result, the budget deliberations have ground to a halt with the end of the fiscal year less than 3 weeks away. The Journal-Sentinel's Jason Stein indicated on Tuesday that GOP legislators were trying to work out a compromise that would cut around $500 million of that $1.3 billion of Walker borrowing, but that there was a wide range of cuts desired by the GOP caucus.

Republicans in the Legislature are talking of cutting road projects by as much as $1.3 billion over the next two years to lower the transportation borrowing sought by Gov. Scott Walker, with most GOP senators seeking between $350 million and $800 million in cuts to the governor's budget.

A $500 million cut wouldn't hit the state as hard as the larger ones. In particular it would shield the Milwaukee area by allowing the massive Zoo Interchange reconstruction to continue on schedule, according to an analysis by the Walker administration.

The miles of state roads rated "poor and below" would more than double over the next 10 years. Two major projects around Milwaukee would be delayed, with completion of the north-south leg of Interstate-94 from the city to the state line being pushed back by one year to 2022 and final touches on the I-94 east-west stretch being moved back by three years to 2025.

That LFB paper went into further detail, explaining that regular highway maintenance would be cut by $200 million vs the Governor's budget, and major highway projects by $300 million. Among the delays on major projects in the rest of the state are projects that have annoyed drivers for the past few years, including:

Gee, and won't that be swell to have an even longer time frame of orange barrels along these busy roads....

Of course, we could fix the roads and lower the amount of borrowing if we merely raised the gas tax or hiked fees for vehicle registration. The Legislative Fiscal Bureau has a list of these potential revenue options for the DOT, and here's a short rundown of what these options could raise.

Any of these options could be used to reduce borrowing and reduce the ongoing deficits in the Transportation Fund, but because Walker is more concerned with sucking up to no-tax bubble-worlders like Grover Norquist than passing responsible policy, Scotty's insisted that he will not raise the gas tax or vehicle registration fees to pay for the roads.

One other item to keep in mind is that the Transportation budget does not have to be passed at the same time as the General Fund budget, and could wait until later if an agreement hasn't been reached in the next week or so. We'd merely continue at the same levels of taxing and spending that we are currently in, but there would likely be a need to quickly reduce projects and possibly delay payments to local governments as the money would likely run out fast. This is due to the already-ingrained higher levels of spending vs revenues, with lower amounts of time to adjust spending habits if they have to be changed after the new budget is signed.

So while the solutions to solving the Transportation Fund inequities are relatively easy to figure, the politics of a tax increase (in GOP bubble-world) or deteriorating roads (in the real world) isn't. And while it may not do too much to the General Fund's problems, the Transportation Fund's issues are every bit as deep and difficult, and a failure to deal with the issues in this budget will result in a major debt and funding crisis in the coming years.


EDIT- Also read the Wisconsin Budget Project's analysis of the Transportation Fund's situation, including their point that raising the gas tax by a nickel would still leave it below the inflation-adjusted level that it was a decade ago. The next year, indexing that tax for inflation ended in Wisconsin, and many of these funding problems started to creep in. 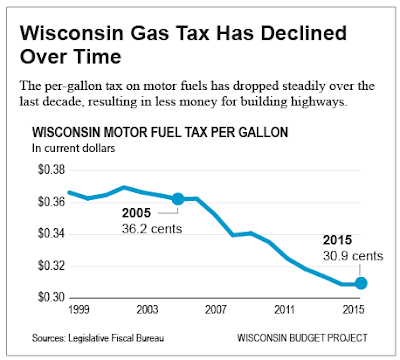