They just can’t help themselves. Even in a time when public education from Kindergarten to Graduate School is being demolished, Wisconsin Republicans still want to cut taxes for those who are already doing quite well. This time they want to get rid of the state’s alternative minimum tax.

Republican Rep. Dale Kooyenga said Thursday he plans to propose doing away with the tax that brought in just over $26 million in the 2013 tax year. He said that cut will be made up with raising taxes elsewhere, so there is no net reduction in tax collections.

Kooyenga said his proposal will be brought up for a vote before the Joint Finance Committee, perhaps as soon as Wednesday. 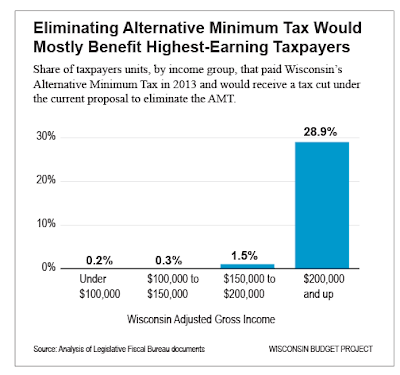 And there are very few Wisconsinites who make that much, as the Legislative Fiscal Bureau’s paper on Wisconsin’s individual income tax says that 2.38% of 2013 tax filers in Wisconsin made over $200,000 in income, or less than 1 out of every 42 who file.

In addition, these are the people that had their tax rates cut the most from the previous rounds of tax cuts, which Koo-Koo Kooyenga also championed. As an example, here is a look at the drop in Wisconsin’s marginal tax rate for a married couple making $250,000 in income, and a single person making $175,000 in Wisconsin.

While 0.48% might not seem like much at first glance, that’s still more than a 7% cut in taxes for every dollar in income made in that tax bracket. In addition, the marginal rates below those levels dropped as well, which means there’s been an even bigger tax cut for those high-income earners (the cuts don’t have to wait until you reach a certain level of income).

So here’s where the state’s Alternative Minimum Tax kicks in. The federal government has raised some of the thresholds for kicking out amounts that are counted toward the AMT, and Wisconsin hasn’t done the same, as the LFB income tax paper explains.

For federal tax purposes, a two-tiered minimum tax is calculated. A minimum tax rate of 28% is imposed on AMTI that exceeds the ex-emption amount by more than $182,500 ($91,250 for married taxpayers filing separate returns), and, a rate of 26% applies to any AMTI below that threshold. After applying the exemptions, Wisconsin taxes state AMTI at a flat rate of 6.5%. If the resulting tax exceeds the amount of regular tax, the difference is added to the regular tax liability. Regular tax is calculated by applying the rate and bracket structure against taxable in-come and subtracting certain tax credits. Except for the married couple credit and the two historic credits, taxpayers claim the non-business tax credits that are not refundable before the calculation of the minimum tax. Most business credits, as well as all of the refundable credits, are claimed after the calculation of the AMT.

The two sentences I bolded in the last paragraph are key, because you’ll notice that the two rounds of Koo-Koo tax cuts dropped the “rich but not obscenely rich” tax bracket from 6.75% to 6.27%. So now, Koo-Koo and company are concerned that their lower income tax rates make these individuals susceptible to the floor of the 6.5% Alternative Minimum Tax, and to solve this "problem", they’re simply going to cut the AMT and give these rich folks another tax break.

The estimated $26 million price tag is merely what it was in 2013, so multiply that by 2 years, and that’s $52 million for a budget cycle. With the U.S. economy and stock market improving in the 18 months since, it’s likely that cost could climb higher than that. What kind of hole gets blown in the future budgets that has to be patched, and what further cuts or tax increases will have to come as a result of this?

You’re seeing the typical cycle of GOP fiscal policy play out in this instance, and these steps are true for either the revenue or expense side.

I’m not even getting into my concerns over which taxes or fees might have to go up in order to make this Koo-Koo proposal "revenue neutral," but you can bet it’ll be something that people that make a lot less than $200,000 a year are going to pay the brunt of. Which gives away the real goal of this “reform” of the Alternative Minimum Tax in Wisconsin- to funnel even more money away from everyday Wisconsinites, and into the pockets of the rich and connected. And if it’s really done right, that extra money will then trickle down….in the form of campaign contributions to the GOP politicians that vote for this giveaway.

We’ve seen this routine repeat consistently for the last 4 years, and it’s failed to add jobs or tax revenues in Wisconsin. It’s well past time we stop this ALEC-based tax-cutting madness.
Posted by Jake formerly of the LP at 5:27:00 PM