As the Republicans in the Wisconsin Legislature fumble around on the state budget with less than 2 weeks to go in the state's fiscal year, there are a couple of big Wisconsin jobs reports that will hit in the next 2 days that might well add to the heat that the GOP is clearly feeling.

Both reports come out on Thursday, and one is the regular monthly jobs report for May. What's interesting about this one is that it comes after the U.S. had a surprisingly strong report for last month, with 280,000 new jobs in May, and the previous months revised up by a total of 32,000 jobs. This was a welcome pickup after a slight slowing of job growth at the start of the year, but it also means that Wisconsin will need to add nearly 6,000 jobs in this month just to keep pace with the rest of the country. Otherwise, the Walker jobs gap will get even larger than the 79,000 private sector jobs that it stood at in April. 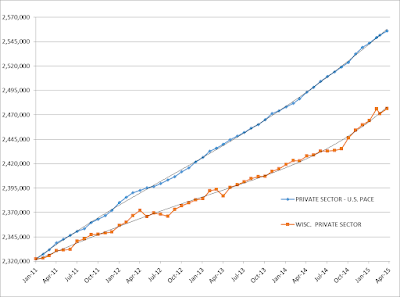 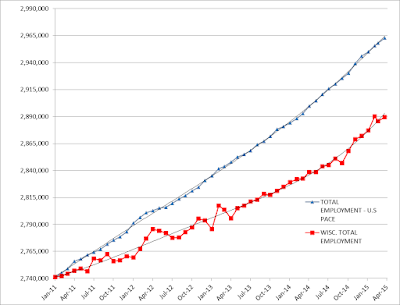 Also worth looking at in the Wisconsin jobs report is the labor force and unemployment rate. Gov Walker has been bragging to the out-of-state GOP rubes about the state's reported unemployment rate of 4.4%, but a closer look shows that this number has little to do with robust job growth, and a whole lot more to do with a shrinking labor force. Both the U.S. and Wisconsin had lower amounts of people in the labor force for the previous three months measured, but Wisconsin's drop is especially severe.

The U.S. had a major bounce back in work force numbers for May, with 397,000 more people coming back into the work force. This explains how the unemployment rate could rise from 5.4% to 5.5%, despite good jobs numbers nationwide and the employment-population ratio being at its highest point in nearly 6 years. Let's see if Wisconsin's labor force has a similar seasonally-adjusted increase (which would be something like 7,500 people), and if so, that makes it very likely Wisconsin's unemployment rate will also rise. Math indicates that if the state's labor force had merely stayed level between January and April that we would have had an unemployment rate that rose from 5.0% to 5.2%, instead of dropping to 4.4%. That reality's not something that Scott Walker's telling the folks in Iowa and New Hampshire and wherever else he thinks GOP donors will give him a buck, but it definitely could hold back the state's projected revenue growth, and make this "crap" budget even worse that it already is.

Thursday also gives the release of the "gold standard" Quarterly Census on Wages and Employment. This features the figures for calendar year 2014, and the Wisconsin DWD already released their preliminary numbers with May's report, which indicated that there were 35,736 private sector jobs added for 2014, and 36,191 overall. This sounds good on the surface, but it's only a 1.51% increase in private sector jobs while the U.S. had an increase of 2.63%. Thursday's QCEW report also gives us an idea how Wisconsin shakes out vs. the rest of the Midwest and all other states in the jobs and wages metrics, and we'll see if Wisconsin can move up from its dreadful performance from the 12 months ending Sept. 2014, where we ended up 40th in private sector job growth and 42nd in wage growth.

Given that this is likely the last jobs report to come out before Gov Walker officially announces for the presidency, there is quite a bit that will be used (and likely abused) from these figures, and we need to have the numbers at the ready to call "BULSHIT" on what are sure to be many cherry-picked claims by Gov Dropout. Especially given that the QCEW will now include all 4 years of Gov Walker's first term in office, we will see just how much we will be behind most of our neighbors (and we will), and we better be prepared to say it loud and clear to make sure the national media isn't tricked by this guy when he tries to run on his record of "success."
Posted by Jake formerly of the LP at 7:58:00 PM