In the middle of a strong piece on Blogging Blue that categorizes the many economic failures under Gov Scott Walker that have been in the news, I found a reference to the LFB budget paper that goes over the Alternative Minimum Tax (AMT). This has an updated price tag on Dale (Koo-Koo) Kooyenga's plan to abolish the AMT, and also gives more information on just how slanted toward the rich that this plan is.

First of all, the paper makes it clear that the first round of Koo-Koo tax cuts in 2013 are the major reason that there was a huge jump in richer Wisconsinites paying the AMT, which leads to Koo-Koo's desire to "reform" it in 2015.

4. The largest increases, both in the count of taxpayers subject to the minimum tax and in AMT liability, occurred for taxpayers with AGI of $200,000 to $500,000. In this income group, the count increased from 2,552 to 20,081, and the total AMT liability increased from $2.2 million to $14.3 million. By combining the third and fourth tax brackets, Act 20 created a bracket which is quite wide, compared to the two lower tax brackets. In tax year 2013, the third tax bracket reached from $21,490 to $236,599 for single filers and from $28,650 to $315,459 for married-joint filers. Prior to the Act, the marginal tax rates for the two tax brackets were 6.5% and 6.75%, but the marginal rate for the combined brackets is now 6.27%. Previously, the marginal rates were at or above the AMT rate, but now the rate for the combined brackets is below the AMT rate.

5. The juxtaposition of the marginal tax rates and the AMT rate results in taxpayers in the third tax bracket (6.27%) more likely to be subject to the AMT than persons in the top tax bracket (7.65%). Under the new tax structure, taxpayers in the 6.27% bracket can incur an AMT liability while claiming few or no tax preference items in calculating their regular tax. Higher income taxpayers are more likely to have enough of their income taxed at the 7.65% rate under the regular tax so that they do not have an AMT liability unless they also claim tax preference items. It can be argued that this treatment between the two taxpayer groups is contrary to the purpose of the AMT, which is to ensure that taxpayers are not able to eliminate their regular tax liability through tax preference deductions.

It's a classic example of WisGOPs reacting to the consequences of their first idiotic tax cut by doubling down and doing a second one to "fix the problem they caused. And naturally, the overwhelming number of people who would benefit are people who make well above Wisconsin's median household income of $51,467. In 2013, here's a simple breakdown of the income tax levels of Wisconsinites that paid the alternative income tax.

So this "reform" helps the richest Wisconsinites by nearly 3-to-1, and the Wisconsin Budget Project shows that they would also be the people getting a major payoff. 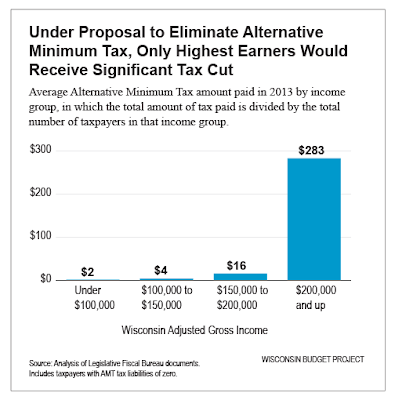 Getting rid of the AMT is not a small tax cut. As the LFB points out, it'd create a sizable hole in an already deficit-ridden budget.

Repealing the Wisconsin alternative minimum tax, effective in tax year 2015, would decrease individual income tax collections by an estimated $33.1 million in 2015-16 and $29.8 million in 2016-17. In tax year (2015 ??), an estimated 31,000 taxpayers are estimated to have an AMT liability under current law provisions.

That adds up to a $62.9 million budget hole! And you can bet that hole gets larger in later years due to inflation, and the lower base of tax revenues that the state would have to start from. And if you take Koo-Koo Kooyenga at his word that he would work out deal where getting rid of the AMT would be "revenue-neutral", then there are nearly $63 million in tax increases to be sprung on people somewhere else in the budget. You can bet those tax hikes are not going to be put back on the same rich folks getting the break from removing the AMT, but instead will be paid by everyday working Wisconsinites.

This AMT move is plain old THEFT, and further hamstrings a budget that already will dish out major economic damage to the state of Wisconsin. This move needs to be forcefully pushed back against, as proof of who Koo-Koo Kooyenga, Scott Walker, and the rest of the Wisconsin GOP are truly working for- and it ain't you and me.
Posted by Jake formerly of the LP at 9:49:00 AM