Wisconsin economy back to the end of the line

I wanted to revisit the awful jobs numbers that came out for Wisconsin in May (8,600 jobs lost, 6,100 in the private sector, and April revised down by more than 3,000) now that the Bureau of Labor Statistics has also released the state-by-state jobs report for May. This will show that Wisconsin is largely isolated in its awful performance in jobs for 2015, and the gap between us and the rest of the Midwest has grown even more in recent months.

It's bad enough that there's this passage in the state-by-state report .

But job losses in March, flatlining in April and additional losses in May mean that Wisconsin has barely added anything during 2015, while our Midwestern neighbors have still been seeing benefits of the Obama Recovery.

If you put together those figures with the recently-released "gold standard" QCEW jobs report, Wisconsin doesn't just stay in last place for private sector job growth, but we fall further behind everyone else. 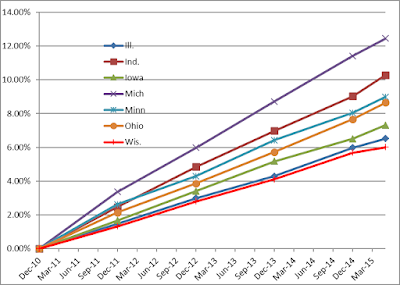 These recent job declines also have driven down Wisconsin standing in today's release of the Philadelphia Federal Reserve's Coincident Index of all 50 states. This index looks at numerous economic statistics to evaluate the strength of the economies in all 50 states, and you'll see that while Wisconsin has not had its economy contract in the last 3 months, like the (GOP-voting) states in red, we're not too far above 0 either. 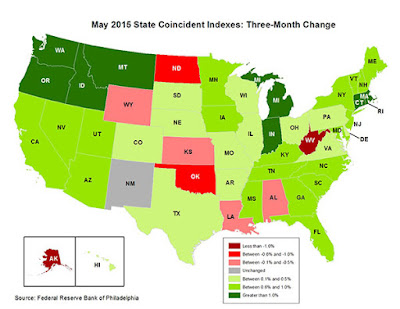 In fact, Wisconsin's economy is clearly the worst in the Midwest in the three months since Scott Walker introduced his budget earlier this year.

So we've got the worst job growth in the Midwest over the 4 1/2 years of the Age of Fitzwalkerstan, the worst economy in the Midwest in the last 3 months, and a state budget that's so screwed up that Scott Walker's own party cannot get a budget done on time, and may not have one for quite a while. Go ahead Scott Walker, you run for president on your record of "turning the state around." Because you sure have, but not in a way you want people to think.
Posted by Jake formerly of the LP at 8:13:00 PM