Another day offers another proposal for the Mlwaukee Bucks arena and related projects in downtown Milwaukee. Today, it involves a plan backed by Milwaukee County Executive Chris Abele that would sell plots of land north and west of the Bradley Center to developers, with the idea that they would build up the currently-vacated area. Sean Ryan of the Milwaukee Business Journal has a good rundown on what is in this proposed development.

The Milwaukee Bucks owners would buy almost 10 acres of public land in the Park East for $1 for an envisioned $400 million in development surrounding a new arena over more than 10 years.

The owners envision 1.5 million square feet of residential, office, parking, retail and other new development on four city blocks. It includes redeveloping the site occupied by the BMO Harris Bradley Center with a 300-room hotel and housing.

Overall, the project will cover 24 acres of downtown, including the Park East land between West Juneau and West McKinley avenues, a site to the south where the arena would be built, and property where the BMO Harris Bradley Center currently stands….

The majority owners of the Bucks formed a group called Head of the Herd LLC to buy the Park East land for development surrounding the arena. Head of the Herd would join with local developers in joint ventures for different segments of the project, according to the June 1 report to the Milwaukee County Board. 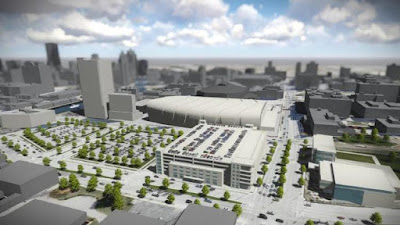 This sounds very different than the "large outdoor bar/plaza" item that was in the original plans a few months back (unless that’s a separate thing), and at first glance, it sounds pretty sweet, right down to the “Head of the Herd” name for the developers. Basically this would fix up the area from the Bradley Center north, with a Bucks practice facility being opened and built around that vacant area at 6th and McKinley (at the bottom of the hill once you get off of I-43 at Highway 145), and a bunch of parking, along with a few buildings that combine mixed-use retail, apartments, and offices.

While I like the idea of using that vacant eyesore of land along the Park East, giving it away for $1 sounds like a total scam. In Ryan’s article, the claim by the Head of the Herd folks is that they should be given such a cheap price "because of the high cost of preparing the land for development, which includes dealing with underground sewers and piers from the now-demolished Park East Freeway spur." But Tom Daykin of the Journal-Sentinel mentions that the County sold two Park East lots in recent years for $2.7 million each, and that current appraisals indicate Milwaukee County could get a lot more than $1 from another developer with plans.

The $8.8 million market value of the Park East lots that would be given to the Bucks group is based on an appraisal completed for Milwaukee County in February 2014 by The Nicholson Group LLC. Those appraisals can be found at the website used to market the parcels, parkeastmke.com.

Those values are based on scenarios where the entire blocks are sold and not divided into smaller parcels.

The estimated values also take into account the costs of environmental cleanup on the parcels. However, the appraised values don't account for the cost of removing former freeway piers buried underground.

It sure seems like County Executive Chris Abele is giving the Head of the Herd folks one hell of a deal, even if the developers have to remove the freeway piers. And since the developers have to do all that work before they start putting up the buildings, I have a hard time believing the first phase will be up and running in 2 years, which is what Head of the Herd claims will happen.

And it’s not like there’s a guarantee that the business and jobs will materialize with such a thing. The excellent Field of Schemes website directed me to this article on what’s NOT happened around Detroit’s new hockey arena.

Nearly a year after Olympia Development announced that a big chunk of $200 million in retail, offices and apartments could be open when the Red Wings' hockey arena debuts in summer 2017, plans, details and timelines of many of those components remain unknown.

"I don't even see the majority of that 45-block overhaul starting before the arena is open," said John Mogk, a Wayne State University law professor who closely follows Detroit development.

"You need to prove a strong market for new residential and commercial, and what is in that area now doesn't make much of a case," Mogk said.

That 45-block area, much of which is blighted or empty, stretches roughly from the northern edge of downtown near Grand Circus Park to the Cass Corridor.

Sure, it's Detroit and not downtown Milwaukee, so the prospects for things happening near the Bucks are likely higher, but it certainly is no guarantee that people will want to jump in, especially before the arena would open in late 2017.

Another interesting point on the development side of this project is that Sean Ryan’s article in the Business Journal quotes the developers as saying there will be millions in property tax revenue added to the tax rolls once everything is built and open for business. This would obviously mean that the nearby properties are not tax exempt, at least not permanently, which is a major difference from the write-offs that were part of the “Sports and Entertainment District” package in Governor Walker’s budget. If I was a County supervisor or City Council member in Milwaukee, I’d sure want to see that put in writing and passed into law by the State Legislature before I handed over that land for any development.

There is obviously much left to figure out with this arena project and the land around it, and trying to blast this into a budget that is supposed to be completed in the next 2-3 weeks seems raises major red flags. It seems time to follow the desires of multiple GOP State Senators, take the Bucks arena out of the state budget, and debate the numerous issues involving the project on its own merits. This will allow us a clearer picture of what all sides will have to give and get with this development, especially from the City and County of Milwaukee, as those communities have the most at risk from what could end up being a very bad deal. 
Posted by Jake formerly of the LP at 9:10:00 PM