In part 1 of this post, I deconstructed the dishonesty behind Scott Walker and the Wisconsin GOP regarding 2011's state fiscal "crisis" that really wasn't a crisis, and how to disprove their zombie lies. Now flash ahead to how we got into the budget mess today, which was set up by bad decisions of Walker and WisGOP, and how we are likely in a worse spot today than we were 4 years ago.

The state and country benefitted from higher tax revenues as a result of the Obama Recovery in 2012 and 2013, but instead of banking most of those extra funds or restoring more of the 2011-13 cuts to the UW System and K-12 education (cuts that were allegedly to be offset by Act 10's decrease in benefit costs, but in most cases did not), Walker and WisGOP gave that away with Koo-Koo tax cuts that mostly benefitted the rich and corporate. The result? When baseline growth in taxes reverted back towards the historical norm in 2014, the tax cuts led to a revenue shortfall.

Combine that with a 38th-in-the-nation standing for job growth in 2014, and the Legislative Fiscal Bureau estimated in January that the state had a $283 million deficit for the fiscal year that ends on June 30. So did the Walker Administration and WisGOP call for another budget repair bill, since there was a larger hole than there was 4 years ago? OF COURSE NOT. This time they claimed that things would work themselves out, and waited for better revenues while making moves behind the scenes such as skipping a $108 million debt payment in May, and covering Medicaid deficits with one-time gimmicks like using $47 million in money from settlements with drug manufacturers, which means those settlement funds aren't available in future years.

However, there wasn't a May upside revenue surprise like we saw in 2011, as the Fiscal Bureau said revenues would stay at the same projections that we saw in April. Interestingly, the Wisconsin Department of Revenue has delayed releasing the May revenue figures, which was a month in which Wisconsin lost more jobs than any other state in the U.S. Given that a bad May would likely result in a year-end deficit, and drive down base revenues for the upcoming 2015-17 budget, you can see where the current and future budgets could be endangered.

And the Federal Reserve of Philadelphia said late last week that things aren't expected to get better in Wisconsin over the next few months. 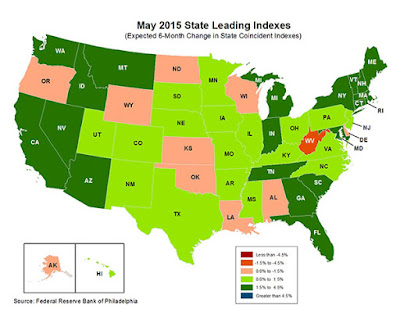 That pink is not a good thing for Wisconsinites, and the negative economic outlook can't help for either the 2013-15 budget or the next one.

The 2015-17 budget was already its own disaster, with large cuts to education, state parks and the science areas of the Department of Natural Resources, just to make the numbers add up. This would likely cause increases in unemployment and drops in economic activity due to the lack of investment. In addition, there are also $700 million in undesignated lapses in the second year of the budget, which means there are other areas that will likely be looking at cuts in the near future, but the GOP doesn't want to tell people where that will be at this moment.

In addition, state employees are also set to take another cut in take-home pay. These are the same employees who already had money taken out of their pockets to pay a higher share of health care and pension costs in Act 10, but Walker and WisGOP backers indicated this was a one-time deal, and that state workers would benefit from a more stable budget in future years. THAT AIN'T HAPPENING. State employees are not slated to get increases in pay for the next two years, and they also will lose additional take-home pay through higher out-of-pocket expenses for health care and related "savings" to make Walker's budget balance. Needless to say, these public employees will likely not be able to spend as much at local businesses, which continues the downward spiral of austerity that has hampered the Wisconsin economy for the last four years.

An additional problem in 2015 that didn't exist in 2011 is that unlike what we had 4 years ago the state's Transportation Fund also has fiscal problems in 2015. Gov Walker's refusal to raise taxes or stop spending on expressway projects means that there is $1.3 billion in borrowing in this budget and an exploding of debt service costs that will have to be paid in future years if those plans stand. But this is unacceptable to many in the Legislature, including Gov Walker's own Republican Party, and it's why we stand 2 days away from the end of the fiscal year with no budget agreement close to being in place. The catch is that Walker insists he will not raise taxes or registration fees (in a shameless pander to GOP bubble-world for the 2016 presidential race), which means there would be projects delayed and a need for added expenses in future years to take care of the backlog.

Scotty's not planning to be around for the economic mess and fiscal disaster that will continue with this budget, and will likely go off in another year, but you can tell that the GOPs in the Legislature are feeling the heat. However, they are trapped by their dogmatic insistence on not raising taxes in most areas, so we will see the end of fiscal year 2015 pass without a budget, even with the GOP in charge of all branches of state government. And with the one-time gimmicks on spending like Act 10, and the revenue-hampering tax cuts staying in place, this means Wisconsin will be facing fiscal and economic deficits for several years, and it can only start to be fixed by throwing this crew out of power.
Posted by Jake formerly of the LP at 9:01:00 PM