Turns out I was wrong, the "gold standard" Quarterly Census on Wages and Employment came out today. And it revealed a number of shortcomings for Wisconsin's economic performance for both 2014, and the entire Age of Fitzwalkerstan. Here is a short list of the levels of fail.

38th in the nation in both overall and private sector job growth, next to last in the Midwest (only Iowa was worse). While the 1.51% private sector job growth is the best of Walker’s 4 years in Wisconsin, it’s still barely above the 1.50% that the state achieved in Jim Doyle’s last year in office in 2010. And the U.S. economy in 2014, which saw the best job growth in the 21st Century, was a whole lot better than what the post-recession nation was dealing with four years prior, as U.S. unemployment stayed above 9.0% for all of 2010.

And as you'll see here, that 1.51% is still lower than the rate of job growth we were seeing in early 2011- before Act 10 and Walker's first budget took effect. 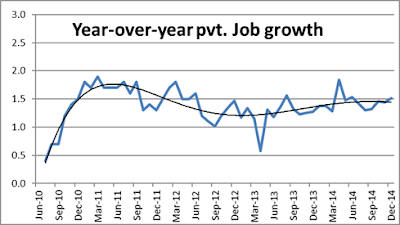 32nd in average weekly wage growth for a private sector job, 5th out of 7 Midwestern states. I suppose that’s better than the 42nd place standing we had at the end of the 3rd Quarter, but it’s still nowhere near good enough, and only Iowa and Indiana had lower average weekly wages than Wisconsin.

44th in manufacturing wage growth (also 5th in the Midwest). These average wages only grew by 2.4% in Wisconsin for 2014, and this was before (right-to) work-for-less legislation was passed. And it’s not like workers in manufacturing were pulling down big money to begin with.

Again, this is before work-for-less was passed. These numbers show that Wisconsin Manufacturers and Commerce were lying when they claimed that Wisconsin had high labor costs that were preventing growth, because Wisconsin workers were already being paid less than their neighbors. Then the corporate dingbats at WMC turn around and whine that they can’t find qualified workers to hire. Maybe you could try PAYING THEM A COMPETITVE WAGE, you dumb fucks!

With the WMC mentality running through the state’s economic policies the last 4 years, is it any surprise that the overall record sucks? This QCEW report allows for a great comparison of the first terms of Scott Walker and several other Midwestern governors that were elected in 2010. As you’ll see, Scotty, and the WMC/ALEC lackeys in the WisGOP legislature are standouts when it comes to job growth…in a very bad way.

DEAD FUCKING LAST. Not like we didn’t know this already, but this a new piece of evidence proving these regressive policies in Fitzwalkerstan have not worked and will not work. And it’s up to us to let the rest of the nation know the same thing as Scott Walker goes around the country trying to claim he’s “turned Wisconsin around.” Oh he turned it around alright…from a state with a decent economy and high quality of life, to one that is the worst in the Midwest, with a declining standard of living.

Go ahead Scotty and WisGOP, run on your record in 2016. Especially since we know the stats will likely look even worse after this absurdity of a deficit-ridden austerity budget takes effect (assuming it one day will be passed by the scared and clueless crew occupying our Capitol).
Posted by Jake formerly of the LP at 5:42:00 PM