Know how I said I'm not worried till consumer spending slows? Uh oh....

I’ve been saying that I wanted to see actual cutbacks in consumer spending before I started taking any talk of “recession” seriously. Well, after a subpar retail sales report for May, we got the full spending and income picture for that month yesterday. And it’s not good.

Real consumption’s decline of 0.4% is bad enough, but this report also included downward revisions of March and April that totaled $104.4 billion (annual rate), so our previously-strong spending levels don’t seem so strong any more. Some economic journalists have noted that price growth seemed to be cooling some (only 0.3% core for May, and 4.8% core over the last 12 months), but even that comes with a caveat, because food prices were up 1.2% for May and energy goods and services were up 4.0% for the month, and overall 12-month PCE price growth went up to 6.7% from 6.5%. So still high, and it translates into real disposable incomes being down 3.3% over that year-long period. The only other positive in this report is that despite the lame overall consumption numbers, spending in services continues to come back. In fact, the last 4 months have seen a clear movement of spending habits into services and out of goods – which seems to indicate a reversion back toward pre-COVID World patterns. 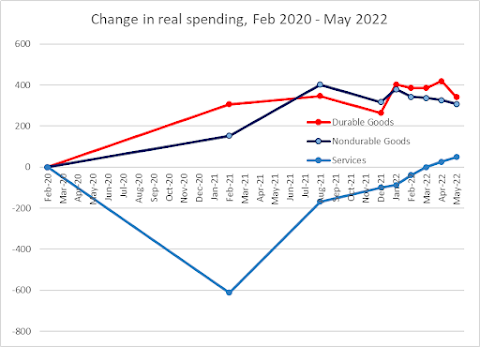 On the income side, $113.4 billion is a solid increase, but growth in wages and salaries was barely half of that gain, and only a strong bump for business owners and and investment income allowed for the overall number to look good. 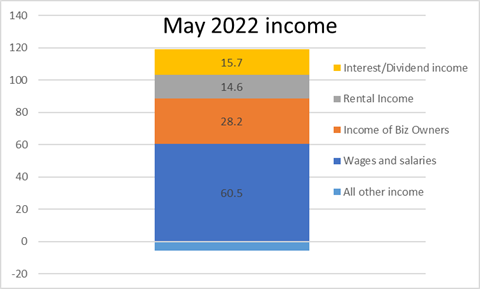 This makes me wonder about what the average hourly wage information might look like in the upcoming US jobs report for June. So far, wage (and job) growth has stayed strong, but could the need for hiring labor be calming down? And with it, the need to keep raising wages to find workers? By the way, that might not be necessarily a bad thing, as a slight decline in demand can be a way to lessen the labor shortages that we’ve been seeing in many areas of the economy. Although the quick shift back into services is likely catching many bars and restaurants short. I also wonder how much of the decline in spending on goods is related to supply shortages that were hitting hard in the first few months of this year. After all, it’s hard to spend money on things if they’re not there. We know that the value of new orders and shipments for US manufacturers continues to grow (0.7% for new orders and 1.3% for shipments in May), so the slowdown in consumer spending isn’t stopping the need for new products on the business side yet. Still, a bad report like this combined with information that inventories may be shrinking more than expected led the Atlanta Fed to now project negative growth for Q2 to follow Q1’s -1.6% real GDP figure. But jobless claims have remained very low, and it sure doesn’t look like a recessionary economy when you go out into the world. There’s a good reason for this, because as this Polish economist points out, the amount of consumer-level and internal business activity is still growing, it’s just that a lot of those products came from overseas in Q1, and might be heading off the shelf in Q2.

The recent GDPNow forecast implies 1.07 pp contribution of final sales to domestic purchasers. It was 2.01 pp in Q1. The economy is slowing. But even with 2 negative quarters of real GDP growth in a row it doesn’t mean it is in a recession. The recession isn’t inevitable. pic.twitter.com/2sFUz4gEgI

It does seem that June has been a time of adjustment, not just in expectations from a jittery Wall Street, but also in an oil market that saw futures drop by $15/barrell over the past 3 weeks. We’ll find out next week if the adjustment includes a lesser-than-normal amount of Summer hiring, and if wages offered are also one of those adjustments. What’s clear is that we’re in a type of higher-inflation, near-capacity economy that I certainly haven’t dealt with in my adult life, and my fear is still that the Federal Reserve will care too much about the inflation side of the economy and overshoot. Which could well lead to serious damage in a “jobs-and-spending” side of the economy that may already be moderating on its own.
Posted by Jake formerly of the LP at 7:29:00 AM