You may have heard that there was a bright red flashing inflation alert this week! Let's start with the Consumer Price Index, and not surprisingly, energy was a big driver behind the increase.

But much of the energy increases are lagging information, as anyone who has been driving anywhere in the last couple of weeks can tell you that gas prices are falling. That's what I paid last Saturday, and the same stations are $4.09 or even lower today. However, the reality of smaller increases won't do much to slow down the “9% inflation” talking point, because July, August and September 2021 had a slowdown in CPI growth compared to other months, so the year-over-year figure won’t decline much at all.

In another key sector the continued jump in food prices made a strong contribution to the increase in CPI for June.

The second shot of inflation news happened this morning, and it caused stock markets to tank at the open of trading (it later recovered most of those losses and thwe NASDAQ even eked out a tiny gain). The Producer Price Index also showed a sizable topline increase for June, but I took a look at the details of the report, and noticed that last month’s increase mostly came from one side of the economy.

That’s an interesting divide there between goods and services. And almost all of that increase in PPI for goods in June came from one area.

The 0.1% increase in foods is a very good sign that the large consumer inflation in that area may be subsiding in the future, although it comes on the heels of big increases between 2.1% and 3.1% in every month between January and April, so it may still take a bit to work through, as stores and producers will still try to make up for lost margins at the start of the year. However, a look at futures prices for several types of food products indicates that not only will prices stop skyrocketing, but they may well drop. Let’s start with milk prices, which have had a sizable runup in the first half of 2022, but the futures markets are indicating that this rise will tumble back down in the coming months and then some. 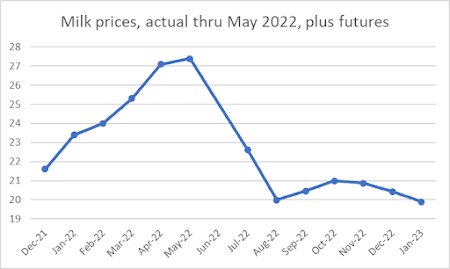 Among other food futures, corn was down by more 6% on Thursday\, should fall by quite a bit more in the next 2 months, and stay at that lower level through the rest of the year. And wheat prices should stabilize, even with the uncertainties over what (if anything) might be available from Ukraine. 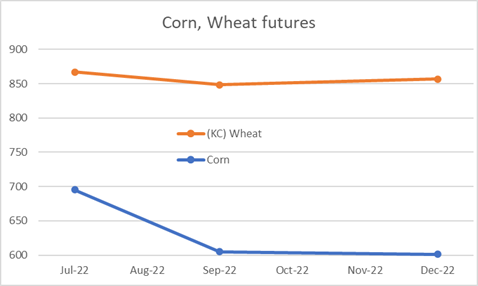 A positive side of the CPI report were declines in both beef (-2.3%) and pork (-1.6%) prices after both products had big increases beforehand. And pork futures are indicating that prices will fall even further for the rest of 2022. 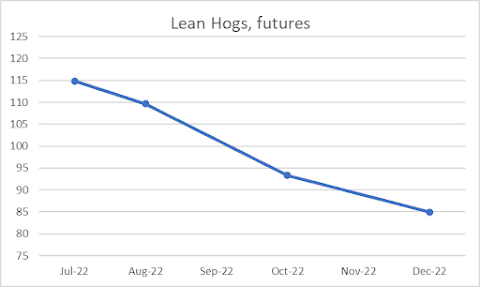 So while the inflation reports showed that prices kept going higher in June, we’ve also seen indications that a reversal of that is happening in July. And there seems to be a good possibility that the price hikes from earlier this year will also be reversed in some key sectors. If that’s the case, and if consumers are already adjusting to higher prices by substituting products or simply consuming less of them, then there is danger of moves being made to react to numbers that may not reflect reality anymore. That’s why I hope the Federal Reserve doesn’t raise interest rates by a full point next week, which is something an increasing number of Wall Streeters are discussing. That would be a significant shock to home markets and people who borrowed with flexible interest rates, and would be piling onto a situation where consumers and markets already seem to be adjusting, and levelling out inflation. A 100-point Fed increase would also sends a message that the economy is unstable, when I don’t think that’s true. Jobs continue to be added at a brisk pace, and wage growth is continuing at a decent nominal number (albeit not enough to catch up to inflation…for now). I also expect to see decent levels of consumer spending continue, especially in service-related industries that haven’t been seeing the price hikes that goods have in recent months. I don’t want to see the Federal Reserve force a harmful recession when one might not be required to get inflation back to a level that doesn’t put strain on everyday Americans’ pocketbooks or businesses’ spending decisions. As I’ve said before, 4% unemployment and 5% inflation is a whole lot better than 6% unemployment and 2% inflation, and I would hope you would agree with that.

Something missing re: inflation vs. unemployment tradeoff debate is who bears the brunt of contractionary policy.

There are those who will never feel the effects of a recession and that clouds their analysis. pic.twitter.com/QUtPML8Tmi