Sorry GOPs, but shrinking deficit, stronger dollar under Biden is LIMITING inflation. Not causing it.

Tomorrow, we will see June's inflation report, and it is expected to have another sizable increase (remember what gas and other prices looked like a month ago?). And when it hits, you can bet Republicans in Congress are poised to say stuff like this.

But those same Republicans were given a report by the Congressional Budget Office today that showed the US budget deficit is at its lowest level in at least 4 years, and is down more than 75% compared to last year. 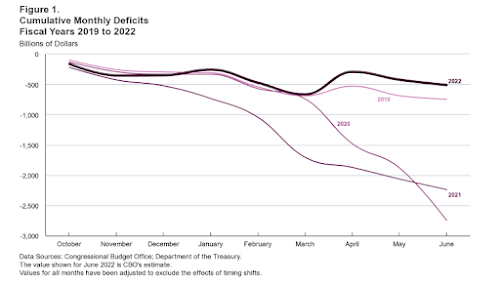 And total outlay spending is down nearly 18% this year, causing a majority of the decline in the deficit (although the strong tax revenues from a booming jobs market helps as well).

And you know what other headline from today shows that our inflation has nothing to do with our (shrinking) budget deficit? This one.

Euro touches parity with the dollar for the first time since 2002 https://t.co/PgnAwNZ7Vs

That's certainly not what you'd be seeing if other countries were thinking the US's currency was worthless because so much of it was flowing around. It's the exact opposite - they WANT dollars, and it makes imports cheaper. That reality doesn't cause inflation, it limits it. I'm not saying we still shouldn't care about inflation (although I do think that June's report is already outdated, given the drop in gas prices since then). But I am saying that if you hear any Republican say it's due to "Democrat spending", know that THEY ARE LYING.
Posted by Jake formerly of the LP at 7:32:00 PM