US jobs market keeps rolling. Hope the Fed doesn't screw it up

While some bits of economic data indicate a possibility of softer consumer [real] spending as prices went up in the first half of 2022, I don't buy that we are in any kind of recession. And here's the main reason why.

BREAKING: The US added back 372,000 jobs in June –beating expectations. The job market remains strong and shows few signs of slowing yet (May was 384,000).

The US unemployment rate remained at 3.6%

**Overall, 98% of jobs lost during the pandemic are now back**#jobs

And to take it one step further, we are at a new all-time high for private sector jobs in America, passing the pre-COVID peak that was set in February 2020. 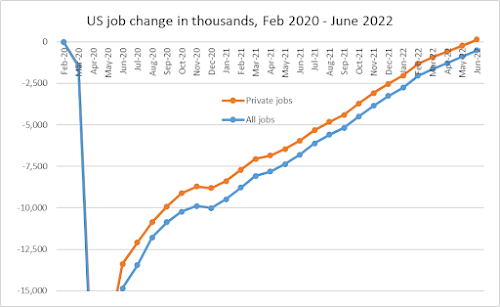 In addition, take a look at this note from the full jobs report.

Employment in manufacturing increased by 29,000 in June and has returned to its February 2020 level.

Which means that employment in both manufacturing and construction is now past the pre-COVID peaks, and that hiring continues above the already-high level that is expected for Summer in these fields. 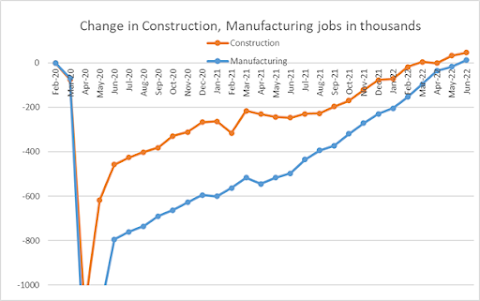 And this is perhaps the most heartening statistic from Friday's jobs report.

Incredible news from the June jobs report: "The number of persons employed part time for economic reasons declined by 707,000 to 3.6 million in June and is below its February 2020 level of 4.4 million."

Translation: People who want full-time jobs can get them.

That means the U-6 unemployment rate (which includes this type of under-employment) dropped from 7.1% to 6.7%, an all-time record for the 28 years that the statistic has been tracked. That's a booming, full-employment economy, Not one in recession. As a result, (nominal) wage growth is continuing, particularly among the lower-ends of the wage spectrum.

The non-supervisory workers have seen an average hourly wage gain of 6.5% in the last 12 months, and while that's not quite the rate of 8%+ inflation, it's still not bad. Add in the still-large amount of job openings reported for May along with the good jobs report for June, it indicates workers have an upper hand and can press an advantage, if they want to. But is wage growth strong enough to push a wage-price spiral? Doubtful. And especially in the areas that might have been dealing with such a spiral beforehand.

Check out leisure and hospitality.
Hourly workers were getting 15%+ (annual) pay increases this winter. Now it's 10.2%

This is frustrating for workers dealing w/inflation.
But it's showing some of the cooling the Federal Reserve wants pic.twitter.com/hqu5f9s1vC

Combine this with gasoline prices finally starting to fall back to reality, and food prices moderating while food futures tank, why are some officials at the Federal Reserve talking about hiking interest rates as high as 100 basis points later this month to shut down inflation? A lot of the price increases that we saw earlier in 2022 seems to be sorting themselves out in Summer through demand that is moderating and a closer eye on profiteering keeping companies in line. I suppose the Fed could say they need the jobs market to cool off even more, since there are still clearly labor shortages in many sectors. That would give time for these businesses to "catch up" to the demand and create a more balanced situation. But I also think American consumers are figuring it out themselves, and the danger is more than the Fed overdoes and forces a recession when a mere slowdown of a strong jobs and spending situation is all we need....and likely will get without the Fed's "assistance".
Posted by Jake formerly of the LP at 2:09:00 PM