After Trump, we cannot "return to normal". MLK knew it, and DC Dems better know it

On this Martin Luther King Day, one statement keeps coming back to me as we have watched the horrors of the last 12 months. 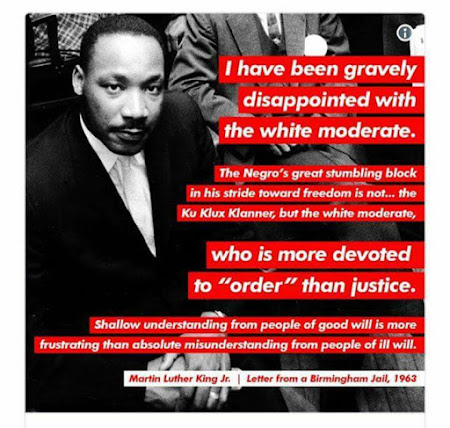 This desire for "order" kept far too many people from taking the steps needed to deal with the real crises that are ravaging the country. This is particularly when it comes to the evils, abuses and violence of Trumpism, which has put our country in previously unimaginable circumstances. And the inability of our leaders to admit that evildoers have exploited flaws in our political and law enforcement systems could lead to serious catastrophe this week if we don't honestly deal with the wreck that we have become. As of now, President Biden is planning on having an Inaugural ceremony that is little different than others, outside of the heavy military presence around the Capitol. This is despite the fact that there is still an ongoing investigation into who caused the deadly riot in DC less than 2 weeks ago, with major questions as to how much of an inside job it was.

Here's Facebook video of Rep. Mikie Sherrill (D-NJ), a Navy vet, Annapolis grad and member of the Armed Services Committee, saying she witnessed a reconnaissance mission by "fellow members of Congress who had groups coming through the Capitol...on Jan. 5."pic.twitter.com/0J2kptBHn4

Yet Biden seems determined to cling to an swearing-in ceremony that will have former presidents, VP Kamala Harris, House Speaker Nancy Pelosi and other political dignitaries in the same place outside. You know who won't be there? Any member of the Trump family. It sounds like the setup for some kind of political thriller movie where a terror attack happens from supporters/allies of the President that was voted out, either in a last-ditch attempt to retain power, or to leave the country in a smoldering ruin that can't recover. And it's predictable as hell, to the point that you want to yell "Can't you see where this is going?" to the screen. I am far from the only one with this fear. Elie Mystal of The Nation is spot-on with how the concerns of political upheaval and racists in law enforcement/White House security are a scary nexus for this Inauguration ceremony.

Everything I read is telling me I undersold this point when I made it last week.
Law enforcement cannot be trusted, we should separate our leaders to reserve the line of succession.https://t.co/Qw3ldRaQ6l

...No matter how many threats Biden receives from Trump supporters and their enablers in Congress and the current administration, he will be inaugurated on that platform for everybody to see. It’s a statement, not just to white seditionists like Ted Cruz and Josh Hawley but also to governments around the world that the United States is “strong” and cannot be intimidated by violence. As far as Biden is concerned, he has to be inaugurated on that stage—the same stage Trump supporters clambered over on their way to assault the Capitol—no matter how manifestly unsafe the conditions of his inauguration may be. Biden has to be there, but Kamala Harris does not. Nor does Nancy Pelosi. The principle of protecting the continuity of the government suggests that Harris and Pelosi, who are respectively the first and second in line to assume the presidency should something happen to Biden, must be shielded at all costs during Biden’s big day. The problem is, even more than a celebration, we deserve Harris alive. And we deserve a government that can continue to function in the face of a white-supremacist attack. We don’t let the president and the vice president fly on the same plane lest bad weather decapitate our government. So why would we risk having both of them in the same place, at the same time, when the forces of white supremacy have promised to return to the Capitol they just tried to sack, in more numbers and with more guns, to finish the job? I don’t think the MAGA crowd can overcome the United States paramilitary apparatus that is set to be deployed to defend our government. I don’t think law enforcement can be overpowered in a repeat of its January 6 failures—unless, that is, its members want to be overpowered. We still haven’t wrestled with the fact that the people who stormed the Capitol clearly benefited from inside help—or at least from permissiveness from members of the Capitol Police. Ayanna Pressley reports that the panic buttons had been ripped out of her office. Women of color like Alexandria Ocasio-Cortez and Cori Bush all recount harrowing experiences. Jim Clyburn says the mob found his private, unmarked office—not the one with his name on the door. Nobody knows if people of color in Congress are safe from their own law enforcement. Two officers have already been suspended for appearing to aid the insurrectionists on the day of the riots. More suspensions could be coming. But whether the department suspends two or 200 more officers, there is zero chance we will have rooted out all the Trump sympathizers within the Capitol Police by the time of the inauguration.

But yet, so many DC Dems think that once we get to January 20 and Biden can get put into power, and gets his people in charge of agencies and a few executive orders are signed, that things will return to "normal." That somehow the evil of Trumpism and misinformation media will melt away. This mentality is why no impeachments and few hearings were held in the 2 months after the election to look into why the Trump Administration was preventing the Biden Transition Team from getting national security information. Or why the Defense Secretary and several other top Pentagon officials were removed by Trump right after the election, and replaced by Trumpist hacks. Or why Bill Barr resigned as Attorney General 4 weeks before Biden was going to take office. And there were plenty more signs that bad things were afoot. But instead, Congress decided that keeping government functioning as-is was more important than seeing the steps toward treason that were occurring right before our eyes. Instead of challenging the OLC memo from 47 years ago that claimed a sitting president can't be indicted, so many Dems in DC and other places decided they would wait it out until Jan. 20, without realizing that another antiquated DC ceremony on January 6 came first. It's still happening today. Even after the riot of 1/6, Senate Dems reverted to "typical procedure" and allowed a measure that prevented any discussion of removing Trump for nearly two weeks. Here's the description from the chief of staff to the previous Dem Senate Leader, Harry Reid.

It was agreed to late last night/early this morning. Technically, any senator can block a new UC from being entered. Realistically, that would be a heavy lift if the House impeaches. And there is the backstop that current UC expires 1/19 at which point the Senate can convene. https://t.co/ibZLJvarY7

Why was this agreed to? Chuck Schumer and DC Dems should have been demanding hearings about what happened at the Capitol, and holding immediate public testimony and evidence-gathering at the Capitol. Sure, Moscow Mitch McConnell might have blocked it, but it would have kept the issue in Americans' cosciousness, and maybe Moscow Mitch and enough Republcians would have decided to get Trump out of there to avoid being lumped in with the traitors. Of course, part of the problem is that Republicans are still in charge at the Senate as of now, even though Georgia voters chose 2 Dems to put Dems in power 2 weeks ago. Georgia officials could allow Jon Ossof and Raphael Warnock to take office and force a 50-50 tie in the Senate, as all counties certified their results by Saturday. And why aren't Dems publicly demanding the state act to draw attention to this delay? On a related subject, why do we allow a crook from Kentucky to decide the agenda and proceedings for the entire a 100-person Senate, other than "it's always been done this way"? This is the type of "default to tradition" that Trump?GOP showed to be only as worthwhile as the people who decide to keep it, or destroy it. And perhaps some traditions don't need to continue after we've seen how they can be abused in this horrible time. You can bet GOPs will try to memory-hole all of the abuses and Trump-encouraged violence that has occured in this awful era, just like how so many House GOPs claimed it would be "divisive" to actually do something about the attempted insurrection on 1/6 (and what a bunch of disingenous crap that was, as if unity can't be acheived by saying "INSURRECTION AND OVERTURNING ELECTIONS IS WRONG.") These slugs will try to do the same stuff they did the last time a Dem took over from a horrible GOP president.

This is exactly what happened after Bush, before Trump the worst president since Nixon and one of the least popular by the end. He helped them out by disappearing to Highland Park to paint and never going into the news, but it's the same playbook.

And we can never forget or forigve all of the Republicans and others in DC that knew better, and refused to step up and tell the truth. Because they cared more about their careers than their country.

They knew. And they said nothing.

So many are still trying to hang on through Wednesday, and trusting that the Biden Inaugural will work out like all others have. But that ignores the many warning lights that are flashing about, and Dr. King's warning about the white (or Dem) moderate that claims it's not worth the battle to eradicate this disease of Trumpism that has infected so many parts of our country seems especially prescient today. These are not normal times, we should not pretend that they are. With that in mind, Biden should hold the Inaugural at a private, undisclosed location in DC, or at his front porch in Wilmington. This is not a time for ceremony and other DC BS - believing in that, and the "institutions of government" gave openings for Trumpism to ooze its way in. It is a time to GET TO WORK, and you can't get to work if you aren't around to be the president, or if there isn't anything to preside over. That's a sad way to approach things. But it's also the right way to approach things in January 2021. To fix the mess, you don't ignore how it was messed up. You have to identify what caused it, how it has to be cleaned up, and remove who is trying to keep you from making it better.
Posted by Jake formerly of the LP at 10:13:00 AM