US loses jobs in December, leaving a hole of nearly 10 million as 2020 ends

The COVID Winter hit the US jobs market in December, ending a 7-month streak of job growth.

U.S. employers shed jobs last month for the first time since April, cutting 140,000 positions, clear evidence that the economy is faltering as the viral pandemic tightens its grip on consumers and businesses. At the same time, the unemployment rate stayed at 6.7%, the first time it hasn’t fallen since April. Friday’s figures from the Labor Department depict a sharply uneven job market, with losses concentrated among restaurants, bars, hotels and entertainment venues, many of them affecting low-income employees, while most other sectors are still adding workers. Still, the nation has nearly 10 million fewer jobs than it did before the pandemic sent it into a deep recession nearly a year ago, having recovered just 56% of the jobs lost in the spring.

Very bad , bunumbers overall, but note the "unevenness", which is even more apparent as you dig into the full jobs report. On the good side, the loss of jobs in December was almost entirely offset by upward revisions in previous months.

So while job growth was slowing in recent months, it was better than we thought, which is a good thing. However, we are still far below the amount of jobs that we had before the COVID World set in, at 9.8 million below February's job peak, and 8.5 million lost in the private sector. 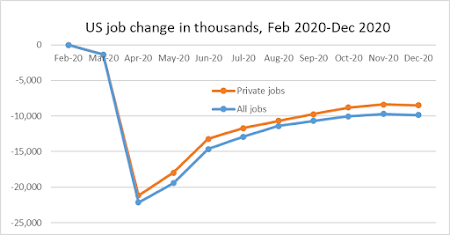 Definitely a leveling off, and worth keeping an eye on for 2021. However, not all sectors leveled off in the last month of 2020. The goods side of the jobs market continued to climb back, with construction adding another 51,000 (seasonally-adjusted) jobs in December, and manufacturing adding 38,000. 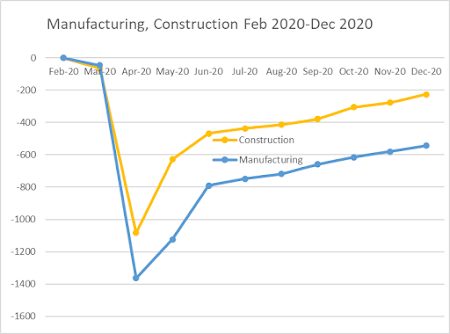 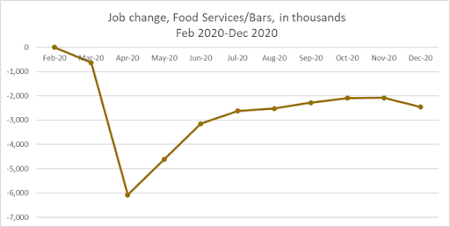 This sure tells me that one priority of the new Dem Congress and Biden Administration is to go beyond the limits of PPP 2.0, and pass the $120 billion RESTAURANTS Act, which targets aid specifically for that service industry. Two other beaten up consumer spending areas lost jobs in December - the lodging industry, and the arts/entertainment/spectactor sports sector. This leaves both areas with 1/3 fewer jobs than they had before the COVID World came in.

The second straight month of a 6.7% unemployment rate and a third straight month of a 57.4% Employment-Population Ratio also indicates that any "recovery" from the depths of this spring had plateaued, with our economy in danger of falling back down. And with COVID infections and deaths reaching new highs in January, it doesn't seem likely that the next jobs report will be much better. Which makes it all the more important that the new Biden Administration and Dem Congress get things quickly moving on two fronts. 1. Get people vaccinated against COVID and the virus under control, so people can be confident in going out to more types of places. 2. More stimulus, both in the form of larger checks to more people, and in targeted help to boost the beaten-up service sectors that cratered in 2020. Then for the Summer, do a major infrastructure package to keep construction and manufacturing going, and to ease the pressures in a public sector that has already lost 1.34 million jobs in the last 10 months. And as an ending tag, there's this inequity in the jobs market that needs to be discussed as well.

Women. Accounted. For. All. The. Losses. https://t.co/De8jQvygyU