After much wrangling, Congress passed a second stimulus bill in late December, and after a week of delay, then-Presiden Trump signed the Consolidated Appropriations Act (CAA) into law right before New Year's. Thrown into that massive bill (which also authorized a lot of regular spending for the 2021 Fiscal Year) were some tax changes that are now rippling their way down to the state level. Some of these changes are automatically changed into state law, but some are not. Wisconsin's Legislative Fiscal Bureau went over these updated tax provisions, and says many would need formal action at the state level in order to have them match up with Feds. Most would a minimal effect on collections, but there are a few exceptions. The largest of the changes deals with what can be written off if a business owner gets a PPP loan or similar federally-funded bailouts. This current difference in state vs Federal laws were the subject of this recent news report out of Wausau.
Now, let's not get too weepy for the business owner, as the LFB explains that this Federal provision basically allows for a business to write off expenses that a PPP loan has already paid for.

The CAA provided for a second round of PPP loans to businesses having 300 or fewer employees, with certain expansions in eligibility and qualifying expenses compared to the previous round. State law previously conformed to federal law in disallowing deductions for business expenses paid with forgiven PPP loan proceeds so as to avoid providing a double tax benefit on the forgiven loan amounts. However, the CAA later provided that, for purposes of federal law, taxpayers may deduct business expenses paid using forgiven PPP loans for both the first round of PPP loans under CARES and the second round under the CAA.

This type of “double-deduction” of expenses also applies to Economic Injury Disaster Loans (EIDL), other SBA loans, and the new federal grants to bail out various entertainment venues and museums that haven’t been able to get attendees in the COVID World. If Wisconsin were to adopt the federal laws on accounting rules with PPP and other subsidies to hard-hit industries, LFB says it would result in a big tax break.

This does not appear to have been discussed by any legislative committees at this point, as it does not appear on the list of introduced bills, although other tax changes have. The second-largest item (around $30.6 million for this year) that the state could go along with would involve the Earned Income Tax Credit (EITC), which was recently changed to allow more Americans to get the credit when they file their taxes in the coming months.

The CAA modifies the federal EITC and the refundable component of the child tax credit as follows. For EITC and child tax credit claims filed for tax year 2020, the CAA allows a taxpayer to use their earned income from the prior taxable year when determining their credit amount, provided their earned income in 2020 is lower than in the preceding year.

Why would someone want to use 2019’s income totals instead of 2020? Because it’s possible they didn’t work as much in COVID-wracked 2020, and therefore don’t have enough income to get EITC, or their write-off is smaller because they paid fewer taxes in the first place. This would be a back-door way to boost the usage and payments of the EITC, which had less usage and fewer payments in the 2010s, partially due to an improving economy lessening the number of working poor, and because of a cut in the state credit that Scott Walker signed in 2011. 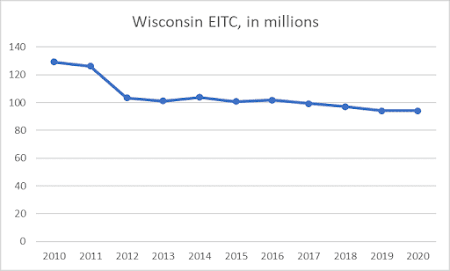 Legislative Dems are already asking for the expanded EITC to be adopted by the state. That, and another bill to allow business owners and others to write off CARES-related grants handed out by the state via the We’re All In program and similar initiatives, was released today. (However, those bills do not mention write-offs for PPP loans or similar direct Federal aid). The other significant tax changes that the state could follow the Feds in adopting would involve: 1. Allowing individuals and corporations to write off more of their charitable contributions in 2021, like they are able to do in 2020 ($3.6 million this year, $13.6 million next). 2. Letting Wisconsinites write off any medical expenses that take up more than 7.5% of income. This used to be 10% and was changed for 2020 in CARES and made permanent in CAA. Wisconsin OK’d this move for 2020, but has yet to go along with allowing the deduction to apply at the state level for 2021 and beyond. If they do, LFB says that would be an annual tax break of $5.1 million starting in the 2022 Fiscal Year (when 2021 taxes are filed). 3. Letting landlords write off depreciation of residential rental properties quicker ($6 mil this year, $4.9 mil next). As we found out yesterday, there is enough money around to pay for these tax cuts, as the state is projected to have nearly $1.8 billion to carry over into the 2021-23 budget. But with tax season already underway, state lawmakers are going to have to move fast if they want to have the Federal tax changes trickle down to the state level with as little conflict as possible for Wisconsin filers.
Posted by Jake formerly of the LP at 6:26:00 PM