After months of concern about Wisconsinites not getting unemployment benefits, the Wisconsin State Legislature was given another chance to do something about it today. That was the date Governor Tony Evers gave to start a special session of the Legislature to take up a bill that would spend $5.3 million to upgrade outdated infrastructure at the Department of Workforce Development. You can guess what "action" the Legislature took on that bill.

Republicans gavel in and then quickly adjourn special session on unemploymenthttps://t.co/qwB2VV10GX

The line from Republicans that run the gerrymandered Legislature is that Governor Evers should be acting on his own to upgrade infrastructure at DWD.

According to a Legislative Fiscal Bureau memo, the Evers administration has numerous current appropriations that could potentially be used for IT upgrades.
· Finance a system through the state master lease program (which is how IT upgrades are typically financed)
· Expedite the procurement of a new system and any contractors needed to successfully implement a new system
· Utilize past or future federal funds made available to the administration
· Existing appropriations which the governor has the authority to prioritize
· Request expenditure authority through the Joint Committee on Finance review process.

The GOPs also included a memo from the Legislative Fiscal Bureau as evidence of this claim. But naturally, they’re not giving the full story on this. First, let’s go over what the LFB says about the Master Lease Program, which is what often funds large-scale tech/equipment purchases by state government.

The master lease program is administered through DOA and is available for all state agencies, and any association, society, or other body of the state entitled to expend appropriated funds, including the Legislature and Courts. Under the master lease program, state agencies submit requests to DOA for approval. The Department's review includes a determination as to whether lease financing is the best alternative for acquiring the equipment and the state agency has the resources to make the required lease payments. An agency's master lease payments are not included in the state budget as a separate line item, but rather are included with other expenditures in one or more of an agency's existing appropriations. From July, 2014, through December, 2019, $157.9 million of master lease funding was approved by DOA, of which 90% ($142.1 million) was related to 28 information technology projects. During the same time period, state agencies made $154.4 million in master lease payments, including repayment of principal, interest, and administrative fees. As of December, 2019, $88.6 million in certificates of participation was outstanding. It should be noted that DWD assumes a UI benefit system upgrade project could cost between $48 million and $70 million. It is also thought the development of a new UI benefits system would require both a substantial period of planning prior to executing a purchase, as well as funding to complete such processes. Once a purchase agreement is in effect, it is not immediately clear how long a master lease term would last for such a purchase and what DWD's annual cost would be.

Basically, this would require DWD to go into debt in order to buy the upgraded technology, and then pay it back over the coming years. Sure, Evers could go ahead and do it, but you know WisGOP would then start bitching about the extra costs in future years. 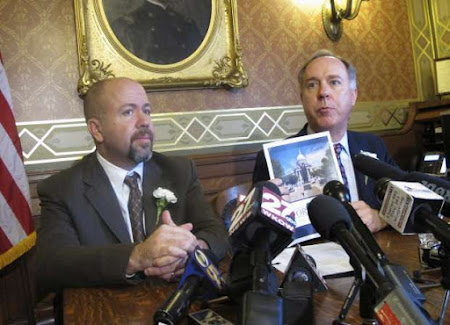 You can't expect us to actually do stuff, can you? Naturally the WisGOPs say NOTHING in their press release about being willing to set aside funds to pay those debt costs in future budgets. So what happens if the Legislature takes those costs out of the staffing costs for DWD in future years, or from other agencies? After all, these guys always say the Legislature is an equal partner in the budget. As for the current DWD fund availabilities, there is about $14.45 million in an account for “program integrity”. But that is also money that goes into researching whether applicants are committing fraud, as the LFB describes.

Currently, this fund is used for fraud investigation, worker classification enforcement and outreach, identity verification and crossmatching, and investigation and prosecution of criminal UI fraud.

Not surprisingly, as the number of unemployment applicants skyrocketed in Spring 2020, the state spent more than 7 times in the last fiscal year to verify claims than it did the year before. Program integrity fund expenditures, Wisconsin DWD
2018-19 $663,472
2019-20 $4,774,673
And the amount of money coming into the fund is likely to remain the same under current law, because the funds come from a 0.01% unemployment tax on employers, and penalties from people convicted of committing fraud. Given that we are likely to now have a full fiscal year of elevated unemployment claims, that $14.45 million in the Program Integrity account is likely to be gone quickly. That is, unless the WisGOPs want to get rid of all of the barriers and forms it put in place to cause all of this work that goes into Program Integrity, and make it easier for Wisconsinites to get their benefits. But I don’t see them putting up any bills to do that. The other money lying around DWD is $15.6 million that comes from “unemployment interest and penalty payments”. But a lot of this money is set to be sent back….and then some!

The Department has estimated an $85 million liability to this appropriation account once DWD has completed noncharging reimbursable employers, as specified under 2019 Act 185.

This is an act that the WisGOP Legislature added to the state’s CARES bill last April, as a scheme to make sure employers continued to pay lower unemployment taxes. OOPS! As for federal funds, there isn’t really much coming from the Feds outside of extra money to pay for expanded unemployment benefits. The LFB mentions $1.6 million is left over from the 2009 stimulus bill for “unemployment administration”, which I suppose could be used to pay for this. But that’s a small portion of the $48 million -$70 million that the IT upgrade would cost. The LFB adds that there could be money moved from one agency to another, but the Joint Finance Committee would have to sign off on it, and Evers would have to identify what agency gets cut to pay for DWD’s IT upgrade. JFC and the Legislature could also try to transfer funds from one agency to another, claiming a “fiscal emergency”, but they haven’t chosen to take that step. That being said, if I was Evers, I would call the bluff of the WisGOPs, and ask for the money via some kind of transfer between accounts (if there is money to be found), then also ask the Legislature to cut expenses in the Program Integrity Fund by removing the barriers that WisGOP built in order to make it such a pain to get benefits. How would WisGOP react? Likely the same way they are now.

Because WisGOP doesn't want to step up and help Wisconsinites get their benefits in a smoother manner. They just want to whine about the situation and push all the blame on Evers for the problems that WisGOP caused through their Walker-era negligence and talk-show based idiocy.
Posted by Jake formerly of the LP at 6:42:00 PM