Biden stimulus - go big, get it done, and hammer anyone that tries to get in the way

No, we're not at the Inauguration yet, and there are serious issues in our politics to clean up. But just as immediate is the need to stabilize an economy that is heading down as COVID cases hit their worst levels yet. And Biden put out a plan for stimulus/stabilization with hopes that this can get into law in the next 2 weeks.

• $1,400 direct payments
• Extra $400/week for unemployed
• $416B for national vaccination program with goal of 100M shots administered and reopening schools in first 100 days
• Wants bill on desk end of Januaryhttps://t.co/HVvUj9ENgT

Now let's go into more detail on what CNBC says is in Biden's plan.

Direct payments of $1,400 to most Americans, bringing the total relief to $2,000, including December’s $600 payments. Increasing the federal, per-week unemployment benefit to $400 and extending it through the end of September Increasing the federal minimum wage to $15 per hour Extending the eviction and foreclosure moratoriums until the end of September $350 billion in state and local government aid $170 billion for K-12 schools and institutions of higher education $50 billion toward Covid-19 testing $20 billion toward a national vaccine program in partnership with states, localities and tribes Making the Child Tax Credit fully refundable for the year and increasing the credit to $3,000 per child ($3,600 for a child under age 6).

That's what in it. But every bit of a debate will be HOW those stimulus measures might be passed through Congress. While Democrats will run both houses after January 20, the margins will be tight, which has its own challenges if weak-hearted Dems and there is also the arcane debate rules of the Senate where this already-unrepresentative chamber requires 60 of 100 votes to end debate and go to a final vote on most issues. However, there is an exception to that 60-vote rule in the Senate, and that's through a process called budget reconcilation. Laura Davison gave a good rundown of how budget reconciliation works in the Washington Post today.

It’s a procedure created by the Congressional Budget Act of 1974 that allows for expedited consideration of legislation related to spending, taxing and the federal debt limit. First, the House and Senate must agree to a budget resolution, which contains instructions to specific committees in each chamber and usually includes a deficit impact. Bills advanced under reconciliation then need only a simple majority vote to win approval in the 100-seat Senate, rather than the 60-vote supermajority required to pass most measures. There are limits on what qualifies for reconciliation and on how many bills can be deemed as reconciliation each year.

So what could be passed with only 50 votes in the Senate? Here's what Davison says would likely be part of that group.

Proposed stimulus payments of up to $1,400 per person, an extension and expansion of unemployment benefits and an expansion of several tax credits -- including those for children, dependent care and paid leave -- would in all likelihood pass muster as legitimate elements in a budget reconciliation bill. Proposed new spending on vaccines, virus testing, state and local aid, schools and child care might be acceptable, depending on how they’re crafted. Usually, reconciliation bills are aimed at curbing deficits, not expanding them, but there’s no reason the process can’t be used for additional funding, said Gordon Gray, a former Senate Budget Committee aide.

On the flip side, what are the policy items that might need 60 votes, or some kind of rule change that adjusts what budget reconciliation can be used for.

Harder to justify as appropriate parts of a reconciliation bill are Biden proposals to mandate that employers provide paid leave for employees during the pandemic and to ask the Occupational Safety and Health Administration to create a new Covid-19 protection standard for frontline workers. The bill likely could approve funding for those measures but couldn’t create the programs if there isn’t a direct budget connection. In the past, lawmakers have been able to work around that requirement by portraying program language as the terms and conditions attached to the money. So while funding for rental assistance would likely be fine, a proposed moratorium on evictions would require some justification. There is a heated debate in particular over whether raising the federal minimum wage can be done via reconciliation.

The Senate's parliamentarian (Elizabeth MacDonough, who has had the job since 2012) can rule whether something is/is not fiscal, but she can overruled by the Chair that is presiding over the Senate (which often might be VP Kamala Harris, due to the Senate's 50-50 tie). And I would hope VP Harris is willing to step up and step on toes in order to make sure key parts of the stimulus are able to get through. With that in mind, this should be a stimulus that goes on 3 tracks. 1. Fiscal items that should pass quickly - items such as the 1,400-$2,000 checks (I'd do it in 2 installments over 2 months, but I bet they won't), higher unemployment payments, a higher Child Tax Credit, and possibly even targeting aid to certain hard-hit sectors of the economy (like the bipartisan RESTAURANTS Act). You also could have the eviction moratorium done in the form of added funding to agencies at the state and local levels, so there is a fiscal element included. Get those provisions in fast, and make GOPs try to turn down these overwhelmingly popular items that Americans have voted for. I bet enough of them won't. 2. The funding for COVID vaccines, ramping up distribution efforts, and the funding for schools should be a separate bill. Targeted state/local aids related to these efforts is also a way to do it. This is also something every Senator should be behind, and if they aren't, they need to be called out forcefully and in numerous ways (press conferences, ads, etc). This is a messaging war, and messaging that "GOPs don't want us to go all out to recover from COVID" should be damaging all corners of the GOP. That should allow these aids to go through quickly, and cause certainty for the next school year. 3. The items that GOPs may cry crocodile tears about are the ones that will likely need the 50 votes of budget reconciliation. This is direct cash to state/local governments (as we saw in the CARES Act), increasing the minimum wage, and infrastructure such as roads and broadband. There is a talk of a general "jobs bill" that Biden would roll out next month, and that seems to be the right time for those items. There is little question that our economy is in a dangerous place right now, and that a lot of American people and businesses are still on the edge, 10 months after the COVID World set in. In the last week, we have seen new unemployment claims rise back to where they were last Summer. 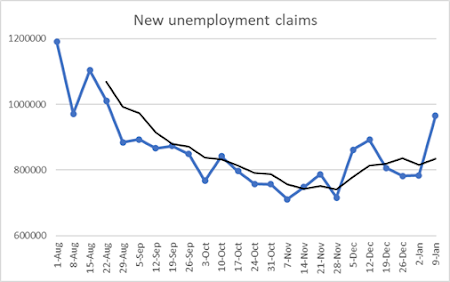 And consumer spending is declining again, making an already-bad situation in retail even worse. 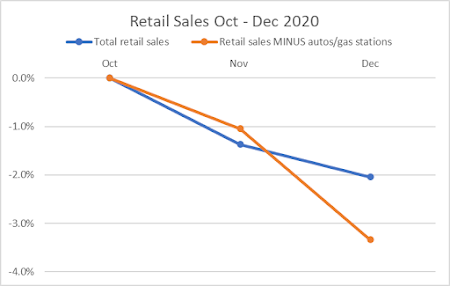 We are going to have to pump the gas to avoid a double-dip recession taking hold before most Americans are vaccinated. So going big on stimulus early is going to be critical for Biden, and if GOPs try to obstruct it, it has to be called out fiercely and often. Especialy now that we know the Trump Administration lied about how many doses were out there, which puts us even more behind where we need to be.
Posted by Jake formerly of the LP at 11:40:00 AM