Senate GOP COVID bill at least has a chance of dealing with reality. And reality is needed

After the GOPs that run the Assembly passed a COVID-related bill last week that has zero chance of becoming law, the Senate Republicans responded today. And it looks like the Senate GOPs got rid of some of the garbage that made the Assembly bill an obvious no-go.

The new Senate bill shares many aspects of the legislation passed by the Assembly, including a provision that would protect businesses, local governments and schools from coronavirus related lawsuits. But they removed two elements that could make their bill somewhat more appealing to Evers. They took out a provision that would require local elected officials to vote to continue any emergency order issued by local health officials after two days. Also removed was a provision that would require a two-thirds vote of a school board to approve a plan to implement virtual instruction and require the board to vote every 14 days to keep it in place. Evers has said any provisions that take power away from local officials navigating the pandemic is a problem for him.

So this Senate GOP bill at least gives an impression of being crafted with the idea of becoming signed, unlike the Assembly GOP's garbage. And people didn't have to increase their risk of catching the virus to give their opinion on the Senate bill.

When the Wisconsin Assembly Health Committee held a hearing on its COVID-19 bill, it only took testimony from people willing to show up in person at the Capitol hearing room, resulting in very little testimony

That doesn't there aren't some RW absurdities left in the bill. Along with the provision trying to allow employers to be taken off the hook for liability if their workers get sick, I noticed some of the people testifying included anti-vax types who wanted to keep an Assembly provision preventing employers from requiring workers to get the vaccine, or to be vaccinated before they start a new job. Amid the discussion of these bills, it does seem that COVID infections are rising back up in the early days of 2021. Last week had the most positive tests in the last 3 weeks, and the percentage of people whose tests ended up positive over that 7-day stretch was at its highest level yet. 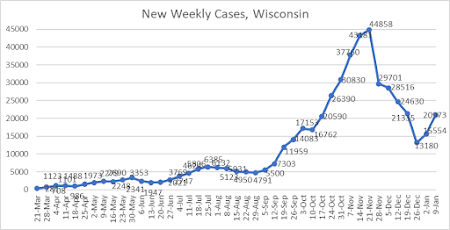 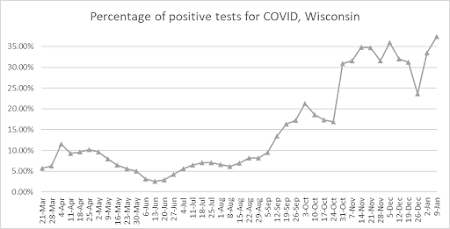 Deaths also rose in the first full week of 2021, back to a pace of more than 40 a day in Wisconsin. 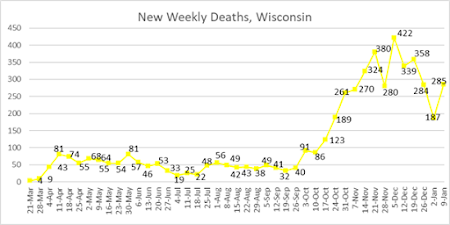 This week will continue to have us see the fallout of Holiday season travels and meetings, and we'll see if cases continue to trend up. We also will see college students return to campus soon, and it appears that UW-Madison and other institutions are going to crank up their testing, including new saliva tests. This means we'll get a fuller picture of whether COVID is going to surge back to the high levels we saw in November and the first half of December, and it may increase the urgency for the GOP Legislature to pass a realistic bill to deal with COVID instead of trying to play partisan games that get nothing done. It still appears to be months before a critical mass of Wisconsinites will be vaccinated against COVID, so there is still a strong need to mitigate and limit the damage, even if it is far too many for too many.
Posted by Jake formerly of the LP at 6:58:00 PM