The vaccine is finally getting to Wisconsin. But do GOPs really want to help?

Despite the COVID-19 vaccine being available for more than a month, the US continues to see more COVID infections in the first 2 weeks of 2021. In addition, outgoing President Trump has been much more concerned with trying to overturn an election and stir up angry right-wingers instead of dealing with a pandemic that is at its worst levels yet. Trump (back when he had a Twitter account) even said that the Feds had no role in admistering the vaccine, saying it was up to the states to oversee who got the vaccine and where they got it. This has left Wisconsin to fend for itself as it tries to figure out how many doses it is getting, where the doses are going, and who will get them. And it does not seem to have gone smoothly.

'Bizarre, disorganized': Data show state behind most of Midwest on COVID-19 vaccinations; some health care workers say they're in the dark https://t.co/UKBTCjVY5P

The state is 10th lowest out of 12 states in the Midwest in getting a first dose of the vaccine to its residents on a per capita basis, according to data from the Centers for Disease Control and Prevention. And Wisconsin is 10th lowest in terms of how much vaccine has been distributed, per capita. At 1,150 doses given per 100,000 residents in Wisconsin — or about 1.2% of the population — only Michigan and Kansas ranked lower for the rate at which its population was being vaccinated.... "It’s chaos," Kalpana Kumar, a Pewaukee-based private practice medical doctor, said in an interview. "I haven't received any communication." Kumar, who has been practicing medicine for three decades, said she doesn't know how to get doses of the vaccine. Nobody from the state Department of Health Services or her local health department contacted her about when she and her staff would receive the shots, she said.

The Journal-Sentinel story goes on to quote DHS officials as saying they were in the dark from the Feds as to how many vaccines are going to be available, and then have logistical challenges in getting it to the pharmacies and facilities to give the shots to the people. It does seem like the Feds have finally recognized they need to give more guidance to states, as we found out in recent days that more doses are heading our way. And given that cases have started to go back up, it's become even more urgent to get those shots into people.

More than 187,000 doses of the COVID-19 vaccine have been allocated across Wisconsin since last week, while new reports of infections are averaging at around 2,800 cases per day, according to the latest data published by the state Department of Health Services. DHS reported 2,790 new cases of the disease Tuesday, bringing the average for the past seven days to 2,827 daily cases. One week ago, the average was 2,400..... According to the DHS, 607,650 doses of the vaccine has been allocated across Wisconsin as of Tuesday, an increase of 187,450 from the last update. Currently, 163,371 doses of the vaccines have been administered while 373,100 have been shipped. Of the two vaccines approved for use, 104,806 doses of the Pfizer vaccine have been administered while 58,564 doses are the Moderna vaccine. A graph showing the daily number of vaccinations across the state saw a steady increase in doses administered over the first full week of 2021. Preliminary data shows a decrease in the number of vaccinations since Jan. 8.

For the first 2 days of this week, preliminary numbers indicate around 10,000 Wisconsinites got the vaccine each day, which is below what was being put out at the end of last week. 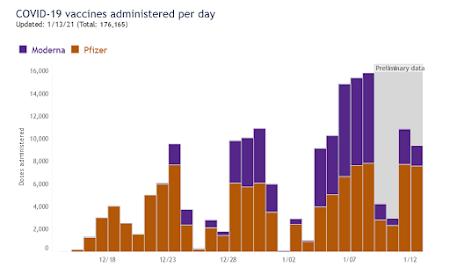 Along with increase of doses coming from DC, we finally got some kind of guidelines at the state level this week.

Those 70 and older would be eligible for shots under a plan given preliminary approval by the State Disaster Medical Advisory Committee (SDMAC) vaccine subcommittee. Federal officials with the Trump administration would like to see slightly younger people get vaccinated next, suggesting states lower the cutoff age to 65. "I think everyone's moving in that direction. COVID-19 is most lethal for those over the age of 60," said LeadingAge Wisconsin President John Sauer, who noted 90 percent of coronavirus deaths in Wisconsin are people that age or older. The pace of vaccinations depends on how effectively the state distributes doses and the amount allocated by the federal government, which currently falls short of what Wisconsin needs said Gov. Tony Evers. In a statement issued Monday, Evers called for a larger share of the nation’s vaccine supply. Both the Trump administration and President-elect Joe Biden have said they intend to increase the amount of vaccines to states by no longer setting aside doses in case manufacturing doesn't keep up with demand.

But it is still unclear which Wisconsinites are set to get the vaccine and how soon that may happen, and Republicans in this state are quickly blaming Governor Evers for that lack of clarity.

Along with @RepSteineke, I issued a letter to the governor regarding concerns about his administration's COVID-19 vaccine distribution plan. There is widespread confusion about who’s eligible to get the vaccine & when. We need a plan now.
https://t.co/uBydFFol09

Now, are Robbin' and Shrimpy Steineke going to actually pass a bill to fund distribution or come up with a plan of their pwn? OF COURSE NOT! Have Robbin' and Shrimpy demanded that the White House ghive more direction or take over distribution of the vaccine? OF COURSE NOT! The same meme was given out by former Congressman/former Paul Ryan coffee boy Bryan Steil. That guy didn't have a word to say about the disgraceful speech and actions of the President and other Republicans who inspired a riot in DC (and he voted against impeachment today), but was more than willing to dump blame on Evers for the lack of Wisconsinites being vaccinated.

People in Wisconsin are dying every day, workers are out of work, small businesses are shuttered, and kids are out of school. Governor Evers, we cannot afford continued delays in the distribution of the COVID-19 vaccine! https://t.co/eHClqNb9nX pic.twitter.com/nkRD0of9IG

The GOP strategy is obvious here - do as little as possible, deflect any responsibility away from Trump and the WisGOP Legislature being MIA on the issue, and hope Evers and Biden take hits in public opinion as the COVID World continues to drag on in 2021. Republicans don't want government to be well-functioning and a force that helps the public, and it's definitely not in their interest to have it work well when Democrats are in charge. The incentives that GOPs have on COVID isn't something that necessarily involves a return to normal, especially given that today's GOP is so craven that they value power over making government work for the people. So watch for GOPs to try to spend more time searching for shortcomings in the vaccination effort over trying to come with ideas and plans to get the vaccine out to people, because they want to make the public frustrated enough to throw out Democrats in 2022. This means that the Biden Administration needs to hit the ground running, centralize distribution of the vaccine, and come up with a clear, nationwide framework that lets everyone know who is at the front of the line, who is not, and how long it will be until each group will be receiving the vaccine. None of that exists right now at the Federal level, and there is little idea how much of the vaccine is coming or where it is coming from. Which makes it very hard for states like Wisconsin to be able to formulate a strategy on how to adminster the vaccine, because the target keeps moving. That's a roadblock that Biden and Evers need to make voters aware of, and be seen overcoming. I'd argue that whether them and other Dems beat COVID and are given credit for doing so is going to be crucial into seeing whether they will maintain or even increase power, or lose it.
Posted by Jake formerly of the LP at 7:24:00 PM