As Biden and Dems take over, they have to clean up from a faltering Trump economy

The election of November 3 took place under a time when COVID infections were on the rise, but still below 100,000. The previous 3 months had seen an average of 950,000 jobs added for each month, with unemployment dropping from over 10% to under 7% in those 3 months. Donald Trump and the GOP actually ran on the image of a strong, improving economy, and a lot of people bought it. 2 months later, it looks a lot different with Joe Biden and a Democratic Senate set to take power in 10 days. COVID infections are up to nearly 250,000 a day, and deaths have gone from 850 a day when Americans voted, to more than 4,000 in a couple of days in the last week. In the jobs market, it has swung from a gain of 925,000 private sector jobs in october to a LOSS of 95,000 private sector jobs in December, and 140,000 overall. The rate of unemployment has barely budged, from 6.9% in October to 6.7% in December. New unemployment claims have remained high, with the level of new claims being no different than it was at the start of October, and 76,000 above what it was on the week of Election Day. 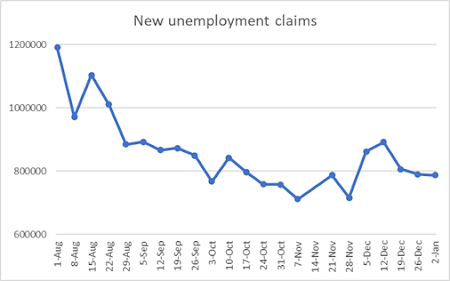 This means that in addition to having to deal with the fallout from last week's coup attempt and a COVID pandemic that is worse than ever, Dems are going to have to act quickly to deal with the fact that many millions of Americans are in significant fiscal strife. 10 months after the COVID World began to take hold, millions of Americans that lost their jobs when the pandemic first hit are still out of work today. As you can see, the total number of people reporting no work in the previous month is basically no different than it was in October. 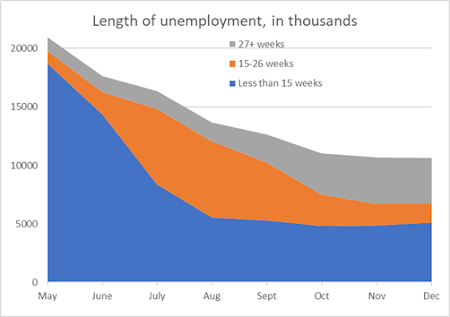 Note the 27+ week unemployment figure in that chart. Those individuals were eligible for benefits under the Pandemic Emergency Unemployment Compensation (PEUC) program that allowed for the Feds to fund 100% of unemployment benefits between 26 and 39 weeks. The stimulus package passed in late December then extended that time frame to 50 weeks, but because President Trump delayed in signing the aid package for a week, it led to lapses in coverage and confusion among applicants around the end of 2020. You can see that effect in the latest unemployment claims report, which gives the first report on PEUC claims for the week of December 19, which is 39 weeks after March 21, a week where 3.3 million Americans filed first-time unemployment claims as sectors of the economy shut down for the first time due to COVID. For December 19, the number of people on PEUC dropped by nearly 300,000, while the state-based Extended Benefits program (that gives benefits after PEUC runs out) went up by 150,000. 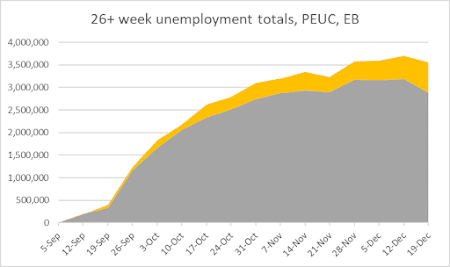 You may see an even larger change in the next jobs report, as 6.9 million Americans filed new unemployment claims in the week of March 28, and would be done with their 39 weeks of PEUC on the week of Christmas. Another place where we saw the effect of Trump's dilly-dallying leading to people losing benefits was in he PUA program for gig workers. PUA was also slated to end on December 26, and was extended to mid-March under the stimulus bill, but the confusion and short-term gap in coverage led to a significant decline in the number of people filing claims for PUA at the start of 2021. PUA Claims
New Claims
Week of Dec 19 393,255
Week of Dec 26 310,462
Week of Jan 2 161,460 I would think that the Christmas and New Year's Weeks were times that self-employed Americans would be losing work, not gaining it. So let's see if there is a big adjustment in PUA claims the other way as the program renewed at the start of 2021. So as Dems come into complete control of Washington politics, Trump/GOP will hand off an economy that has stopped recovering, stagnating at a time when many Americans are out of work and in need. In addition, a lot of stabilization measures will be expiring in the next 2 months, and the economy will still be in a significant hole. That means more stimulus and low-income assistance is going to be required, and along with controlling COVID and getting Americans vaccinated, it has to be the main non-DOJ priorities that Team Biden/Dem do for their first few months in office.
Posted by Jake formerly of the LP at 1:44:00 PM