All of a sudden, Wisconsin government's got PLENTY of money

I figured the Legislative Fiscal Bureau would come out this week with their revenue estimates for the next state budget, and sure enough, we got the numbers today.

The latest LFB estimate projects Wisconsin will end the current fiscal year on June 30 with a state budget balance of nearly $1.9 billion.

Revenues are high enough that it will prompt a $232 million deposit in the state's rainy day fund, bringing its balance up to $994 million.

Whoa. This is quite amazing given the job losses in 2020, so let's dig into the LFB report and see where it comes from. First, the LFB goes along with IHS Markit's projection for the economy to bounce back strongly in 2021 (real GDP growth of 4.0%) and 2022 (real GDP +3.9%), even with today's headwinds of increased unemployment and an ongoing pandemic.

Notwithstanding the difficulties at the end of 2020, IHS Markit forecasts that the federal stimulus and a successful inoculation campaign will cause payroll employment to increase beginning in January and through the second half of 2021. The unemployment rate is forecast to generally decline over 2021, falling from 6.7% in December of 2020 to 4.3% by the end of 2021. Afterwards, the unemployment rate is forecast to continue improving to 3.9% in 2022, before stabilizing at 4.1% in 2023.... Personal Income. Despite the enormous job losses and disruption to the economy caused by the COVID-19pandemic, income and savings in 2020 actually increased due to the large amount of transfer payments and government support from CARES and other stimulus measures. IHS Markit expects the $900 billion stimulus enacted under the CAA to similarly support personal income in the economy in the first quarter of 2021, lifting incomes by nearly $2.0 trillion (at an annualized rate). IHS Markit forecasts that real disposable income will grow by 23.9% in the first quarter (compared to the previous quarter), but then decline by 17.5%, 2.6%, and 0.5% in the remaining quarters of 2021 as the effects of the stimulus fade. Meanwhile, wage and salary disbursements are forecast to recover from 0.6% growth in 2020 to 6.3% in 2021. As a result, IHS Markit forecasts that overall personal income will grow by 1.6% in 2021, 2.0% in 2022, and by 4.2% in 2023.

Well, if that's what's going to happen in the next 2 years, then sure, we'll have plenty of money to play with. And here's how the LFB projects that to go between now and June, 2023. 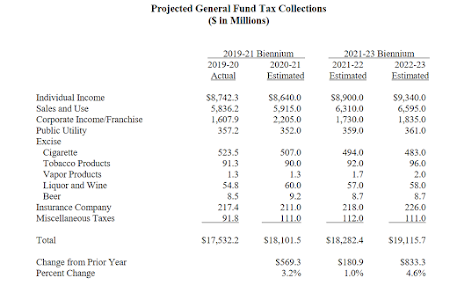 Corporate taxes jumped 20% in 2019-20, and it's expected to have another huge jump in this Fiscal Year. Here's the LFB's explanation as to why, which includes last year's delayed tax filing deadline inflating numbers for 2021.

The LFB also credits increased audits from the DOR for making corporations pay more to the state. Then you see the big jump in income and sales taxes for 2022-23, which the LFB says comes from projections that count on a big jump in Consumer Spending.

Personal Consumption Expenditures. IHS Markit forecasts that the stimulus will maintainnominal PCE in the near term, by supporting consumer spending in the first quarter (0.2%) notwithstanding the surge in COVID-19cases, then later serving as a bridge to improved economic circumstances as the population is inoculated through the rest of the year. Distribution of the vaccines is expected to release pent up demand for consumer services in the second half of 2021, when spendingon services other than healthcare, housing, and utilities is expected to jump by 12.6%. By comparison, as spending patterns return to their pre-pandemic trends, spending ongoods is expected to grow more slowly as consumers return to spending on services. For example, spending at restaurants is expected to grow,whereas purchases for eating at home areexpected to decline. Overall, nominal PCE is forecast to grow 6.1% in 2021 and 2022, before slowing to 4.3% in 2023.

If those rosy scenarios come true, then the tax revenues will pour in under current law. Combine that with extra aid from the Feds for several state spending programs (especially Medicaid), and a number of spending limitations that the Evers Administration put in when they feared the COVID-induced recession would cause a budget crisis, and there is a whole lot of money that Evers can play with in this budget.

Based upon the November 20 report, the administration's general fund condition statement for 2020-21reflects a gross ending balance of $1,221.9 million and a net balance (after consideration of the $85.0 million required statutory balance) of $1,136.9 million. Our analysis indicates a gross balance of $1,851.4 million and a net balance of $1,766.4 million. This is $629.5 million above that of the November 20 report. The 2020-21 general fund condition statement is shown in Table 1. 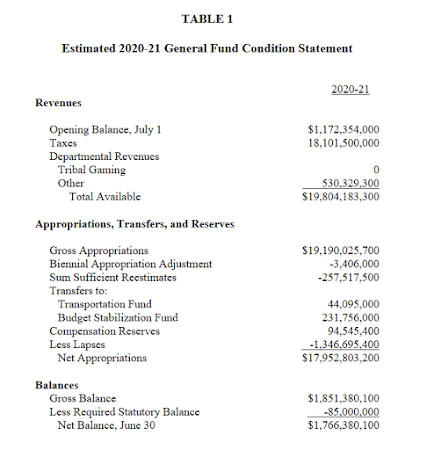 Seems like a pretty good time to go big, and to make an effort to fix even more roads, and to stop having our local governments be so dependent on property taxes. Especially if more help is coming from Dems in DC giving more help to states. The full budget will likely be out within a month, and you gotta figure there will be plenty of one-time opportunities to take care of needs that were ignored throughout the Age of Fitzwalkerstan in the 2010s. The door is open to reverse a lot of that negligence, and it's time to step through it.
Posted by Jake formerly of the LP at 8:13:00 PM